Camped Out in Clayton, Protesters Aim to #StopKavanaugh 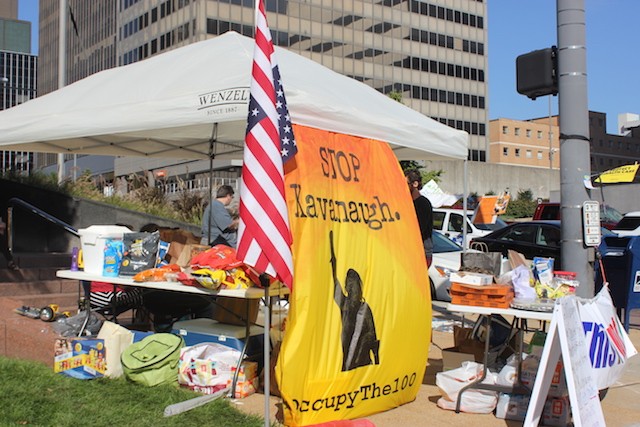 More than 24 hours after protesters first set up camp outside the Clayton office building housing an office for U.S. Senator Roy Blunt (R-Missouri), a half-dozen are still there. By 10 a.m. this morning, the sun is beating down (the day's high is 90). Police have ordered them to take down the tents they used for shelter overnight.

The group, while small, is united by a shared goal: To persuade Blunt to vote against Brett Kavanaugh’s nomination as Supreme Court Justice. And to do that, members say, they're going to sit in — or in this case, sit out — for as long as it takes.

The activists and community leaders first assembled outside Blunt’s office yesterday morning to give a press conference and begin what they called a 24/7 occupation of his office. Participants brought tents, blankets and food, sharing their experiences on Twitter using the hashtags such as “#Occupythe100” and “#StopKavanaugh.” Some of the protesters were involved on the front lines of Ferguson; others, including state Representative Stacey Newman (D-University City) and Alderwoman Megan Ellyia Green, are active locally in progressive and Democratic Party circles.

Kavanaugh was nominated for the lifetime position of a justice on the U.S. Supreme Court by President Donald Trump. His nomination has since become a major center of controversy following multiple allegations of sexual assault.

“He has been accused of sexually assaulting women and that isn’t someone I want to see serving on the highest court of this land,” says protester Amelia Parenteau.

Parenteau recently began a two-week residency at Art House, a housing cooperative for artists and activists in north St. Louis. She arrived in town on Sunday and immediately became involved in the sit in.

“The first thing that happened when I got off the plane was go to an organizing meeting for this protest,” says Parenteau.

Sit-ins can require a decent amount of supplies to keep things going. Those at Art House brought over a variety of supplies that protesters could make use of, such as a tent, chairs, food, a table and some art supplies. However, police made it clear they will only allow the tents at night. After all, this is Clayton.

“We couldn’t have our tents up all day. This is private property and we needed to move, so we took our tents down,” says Susan Clark. Still, she assures a reporter, “They are going back up tonight.”

Some drivers passing by blare their car horns either in support or against the cause. The group said they'd been approached by some people who want to see Kavanaugh appointed.

The protestors hope to make Blunt and other government officials planning to vote yes to Kavanaugh’s appointment see their message.

“It is a lifetime appointment. This is a vital issue that is going to be affecting not only our parents generation, but also our generation and the generation following us, so this is vital and immediate. If people care about it as they should because their lives are going to be impacted, they should be out here,” says Parenteau.

When asked how long they were going to stay and protest, Clark and Parenteau gave the same quick, short and confident response.