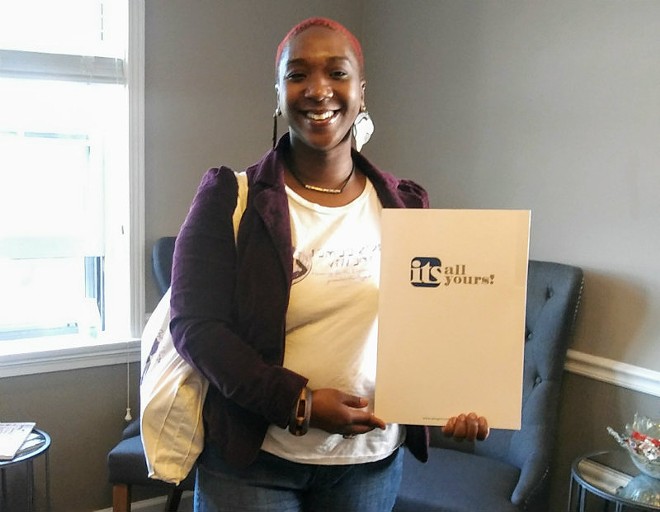 In August, things were looking bleak. In fact, on August 17, the day the Riverfront Times published a story about Jamaa Birth Village's attempt to purchase a building, the Ferguson-based nonprofit had raised just $12,000 of its $60,000 goal. That was after two months of fundraising — and with its capital campaign was set to close that night.

But the grassroots organization, which assists women of color seeking low-intervention childbirth, is used to tough odds. Founder Brittany "Tru" Kellman was herself pregnant at thirteen; she later channeled her horror at what she experienced into becoming a doula. She's on pace to become the first black woman to become a certified professional midwife in Missouri this December, and next year, Jamaa aims to open St. Louis' first equal-access midwifery clinic, providing services regardless of patients' ability to pay.

And Kellman was determined not to give up on the campaign. She'd been given an amazing gift: The physicians selling the building had agreed to sell it to Jamaa for $60,000, a huge discount from its $200,000 estimated value. But without the cash in hand, the organization was looking at a loan — and with so many needy women to serve, spending money each month on a mortgage felt less than ideal.

It took only a few short days for everything to turn around.

Kellman says she was stunned by the outpouring that followed the RFT story. Donations poured in to the organization's GoFundMe page almost immediately on August 17 even as others contributed directly. "By Saturday morning, we were at just a little over $20,000," she says.

But that was only the beginning. It's what happened that weekend that left Kellman nearly speechless.

That Saturday, Kellman got an email. The author said he or she was with a private foundation and they were ready to help Jamaa Birth Village meet its goals. They wanted to connect by phone.

Kellman responded cautiously. "I wanted to believe it, but I was worried it was a hoax," she admits.

Instead, the donor — who has chosen to keep their identity a secret — couriered over a check for $45,000 within just a few short days. The sum gave Jamaa $5,000 more than it had even hoped for, allowing it to close on the building Kellman had dreamt of.

Even after being told the check was on its way, Kellman was almost too nervous to tell her board of directors. It wasn't until she had it in hand — and it cleared — that she exhaled. "It was the most surreal moment opening that envelope and seeing those digits," she recalls. "I deposited it right away!"

Last Friday, the organization closed on the building. It's really only the beginning of its journey — it needs to find a contractor, begin renovations, and a host of things from there. But it still feels like a miracle.

Kellman had previously stated her frustration with how little money being poured into the issue of black women's mortality was making its way to grassroots groups like her own. It felt like the big foundations were sucking up everything, and organizations like Jamaa continued to struggle despite a growing focus on the issue. But the outpouring that greeted the first publicity her organization has garnered made her see things in a new light.

"It gave me hope," she says. "When you're grassroots and you make a way, there are folks who want to work with you. They just need to know you exist."

And going forward, it won't just be media coverage that will remind people of the work being done by Jamaa Birth Village. It will be a brick-and-mortar building in Ferguson, a physical presence at long last for an organization that's been held together by volunteer sweat and pure determination.

"When there's a will," Kellman concludes, "there's a way."