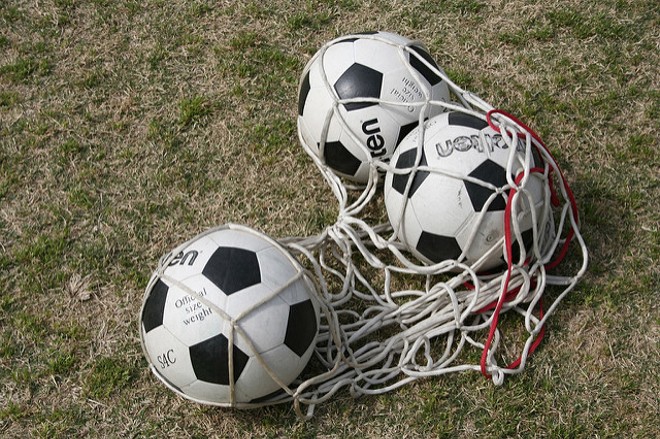 A mother in the wealthy St. Louis suburb of Ladue filed a lawsuit in federal court yesterday, saying that the soccer coach's decision to cut her son from the junior varsity team last month amounts to, yes, age discrimination.

In the suit, the mom — identified only as "Jane Doe" — says the family was told that junior boys who didn't make the Ladue Horton Watkins High School varsity soccer team would not be put on the junior varsity team.

And that, she alleges, is a huge legal problem.

Because the policy is not in place for younger boys, or female athletes, the boy's mother alleges that it violates both age discrimination laws and Title IX, a civil rights law attempting to guarantee equal access in public education regardless of gender. She's asking for a temporary restraining order, a permanent restraining order and an injunction to order the school district to put her son on the team.

Only in Ladue, right?

The suit says the school's soccer coach, Dave Aronberg, explained that he'd had a gut-wrenching decision in choosing his 2018 JV and varsity teams.

"We essentially had 40 kids trying to make 24 spots on the varsity team," Aronberg wrote to the boy's mother. "[Jane Doe's son] was right on the bubble of making the team this year and has some impressive attributes including his attacking mentality and straight line speed. However, there were a few holes in his game including technical ability and game decision making that put him behind a number of kids. In the end, there were just too many kids who had a little better soccer skill and soccer IQ for him to make the [varsity] team."

And Aronberg wasn't willing to put him on junior varsity. Confronted later by the boy's stepfather, the coach allegedly "blamed the parents of four juniors who had played on the junior varsity in the fall of 2017. Because they had groaned about their sons’ playing time that season, Aronberg said he wanted to avoid the 'aggravation' this year," the suit says.

The boy's mother and stepfather made a formal complaint to Ladue school officials, but the suit alleges they "circled the wagons" and defended the coach.

The boy's stepfather then filed a complaint with the Department of Education's Office of Civil Rights. He also sent letters to the Attorney General, the Head of Health and Human Services, each member of the Ladue School Board, the Superintendent of the Ladue School District and the high school principal.

The boy's mother now claims that she has no choice but to turn to the federal courts — saying her son will face "irreparable harm" if he's not put on the team swiftly.

"The junior varsity soccer season will be over by the end of October 2018," the suit notes. "Over half the season is already gone."

The lawsuit was filed by Edwin C. Ernst IV of Sowers Ernst LLC, as well as Paul A. Maddock of Carey, Danis & Lowe LLC.

Update: U.S. District Judge John A. Ross ruled against Jane Doe on October 1, delivering what could be a fatal blow to her case.