Look at These Jerk Bikers Tearing Through the Gateway Arch Grounds 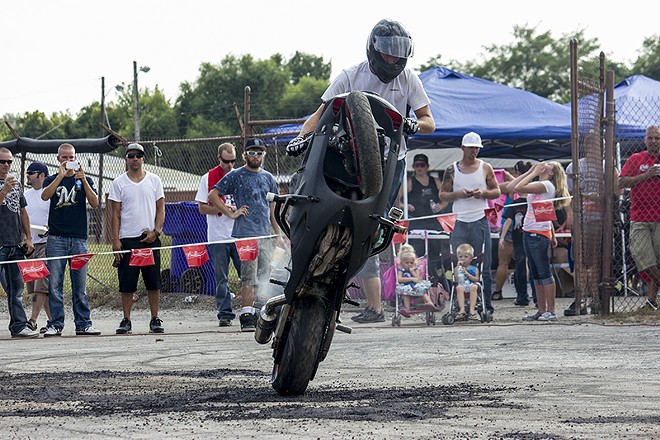 This weekend, the annual two-wheeled circus that is the Ride of the Century tore around St. Louis streets, with bikers from across the country enjoying our region's wide-open highways, gorgeous weather and (apparently) disinterested cops. In addition, according to a video posted to Reddit on Sunday, that party included a joyride on the Arch's lawn.

To be clear, the bikers the didn't just scoot across the green expanse as a quick shortcut or a momentary goof: the video shows nearly a dozen riders zooming around on the green expanse of the recently renamed, and newly renovated, national park.

Video of the Bikers at the Arch from r/StLouis


A few points:
According to an earlier post from the Redditor who shot the above video, the riders appeared at the Arch Saturday night, not long after another group was spotted blocking game-day traffic downtown. In a subsequent comment, the Redditor also posted a photo showing one rider being cited by park rangers.

In an interview this afternoon, Mike Horton, the park's assistant chief ranger, confirmed that three motorcyclists were cited for the unsanctioned off-road riding. While no arrests were made, all three of bikers' rides were impounded. Horton added that the park's maintenance division is currently assessing the grounds for damage.

The Ride of the Century has a contentious relationship with its host city. Founded in 2002 by a local stunt-riding group, the ride now attracts hundreds of bikers annually to the area.

This year, however, the police appeared to ignore the ride's shenanigans, which is in contrast to previous iterations: In 2013, the highway patrol staged press conferences and vowed to crack down on the ride. Even then, it didn't stop the wheelie-pulling crowds from taking over area highways.


Editor's note: The story was updated after publication to include details about three riders cited in the incident.