To outsiders, the town of Hayti, Missouri, might look like a whole lot of nothing. The Pemiscot County municipality — population 2,718 — offers a rest stop and a pair of hotels for travels who've just made their way across the Arkansas border. As the above photo suggests, there doesn't seem to be much else.

But Hayti earned a dubious distinction yesterday: It's No. 2 in a new list of cities across the U.S. with the fastest-growing crime rates.

According to Your Local Security, Hayti showed a scary spike across the board from 2006 to 2016. Violent crime was up 83 percent. Property crime was up another 41 percent. Assault? That was up 68 percent. 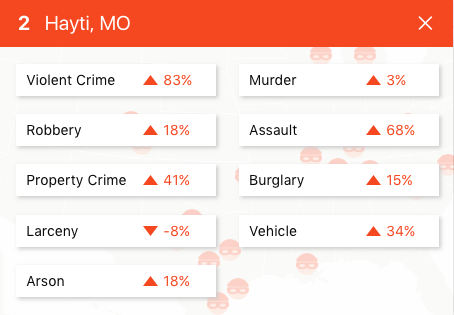 The security company tallied crimes reported to the FBI, including violent crime, murder, robbery, assault, property crime, burglary, larceny, motor vehicle theft, and arson for each city. (Rape was not included because the FBI changes its reporting definitions during the period in question.)

No. 1 on the list? Charleston, West Virginia, a place whose struggles with the opioid crisis have been well-documented. No. 3 went to Kodiak, Alaska; No. 4, Marion, Arkansas. Cleveland Heights, Ohio, took fifth place.

No other Missouri city made the list ... which will obviously come as a shock to the fine commenters over at stltoday.com, who remain universally convinced St. Louis is going to hell in a handbasket.

Alas, neither did any Missouri city make the list of cities showing the biggest drop in crime during the ten years in question. We're apparently just holding steady here in the Show Me State. Well, other than Hayti. Maybe we can have Arkansas claim them?