Those Explosions and Gunshots You Heard Monday Night? Just the Military 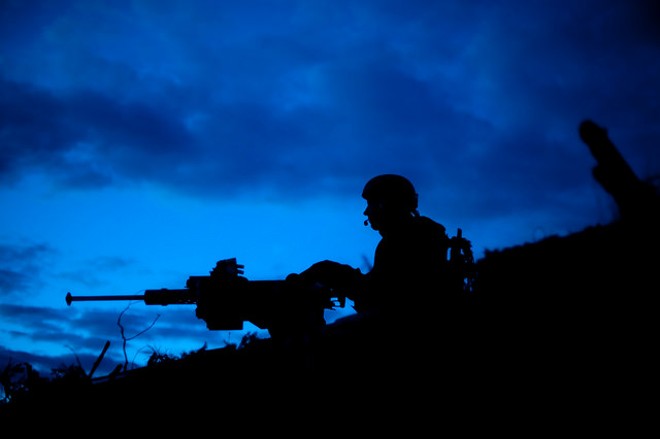 Monday night, around 10 p.m., the usually serene Creve Coeur Lake Park in Maryland Heights was suddenly inundated with the sounds of gunfire, reports of a low-flying helicopter and explosions so loud they set off nearby car alarms.

Fear not, though: That was just the military running training exercises, practicing up for the prospect of total war in the St. Louis area. Nothing to concern yourself with at all!

KSDK reports that the Maryland Heights Police Department was "inundated with calls" from residents, especially those near Dorsett Road and Marine Lane. The police department claims in a Facebook post that it was only notified of the training exercise fifteen minutes before it began, leaving them without time to inform the public.

The department also erroneously and somewhat comically blamed the commotion on the St. Louis County Police, sharing its phone number and directing complaints to it.

As it turns out, though, it was Army Special Forces teams that chose the closed Lakeside Center School, which consists of several vacant buildings right next to the park, to conduct urban combat and flight operations. KSDK reports that local police had been notified ahead of time about the war games — the Army gave advance notice that they'd be in town conducting similar drills in the area for most of this week. As to why that information was not released to the public, a county spokesman says that the Army wanted to keep quiet about the operation for safety reasons. (And as for what went wrong for the Maryland Heights Police, we simply can't hazard a guess.)

But quiet they most certainly were not. In a video sent to KMOV by a viewer, loud bangs and car alarms can be heard over the whir of a helicopter's blades.

“It was kind of alarming,” Margaret Cochran of nearby Parkland Woods Drive tells KSDK. “I came outside the house and looked around and I didn't see anything. That's when I heard more explosions.”

The commotion could even be heard across the river. Lucy Covington of St. Charles County tells the station that she could see and hear helicopters from her home.

The drills had been slated to continue in various locations throughout the week, KMOV reports, but the Army left the area and headed to the East Coast as Hurricane Florence prepares to make landfall.

In other words, next time you hear a lot of explosions and gunfire outside your home, you likely won't have the military to blame.