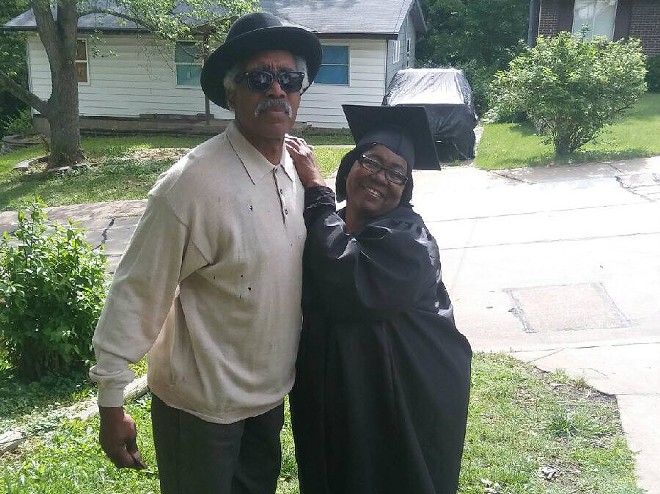 In both December 2012 and December 2013, a disabled U.S. Air Force veteran named Roelif Carter was pulled over by police on routine traffic stops. In both cases, the officers learned that Carter, now 65, had outstanding warrants for his arrest for "failure to appear" and "failure to pay" from the north-county municipality of Normandy — all because he'd been unable to pony up the money he owed for low-level traffic offenses there.

That's despite a number of extenuating circumstances. In one case where he was charged with "failure to appear," his lawyers say, Carter came to court, but the courthouse was so overcrowded he couldn't even get in the door. In another, he got to see a judge, but didn't have the $100 payment they were demanding on the spot. He asked if community service was an option; they issued a warrant for "failure to pay" instead.

And the five warrants the court ultimately issued ended up having serious consequences for Carter. In both December 2012, he was jailed for six days. A year later, he was jailed for another six. On that second occasion, he was released at 2 a.m. — and the officers never allowed him a free phone call or a chance to arrange transportation. He walked all fifteen miles home in the dead of winter.

Carter is not alone — or even the most extreme case. His story is just one of many compiled by the nonprofit law firm ArchCity Defenders and presented as part of a class-action lawsuit it filed this morning in federal court.

The suit charges Normandy with operating a "modern-day police state and debtor's prison," terrorizing north-county residents "through a deliberate policy established and implemented to fill the city’s coffers by extorting money from thousands of poor, disproportionately African-American people in the St. Louis region." It explains three ways Normandy has extorted residents: by threatening them with being jailed, by setting up payment plans with "exorbitant interest rates, surcharges and other fees" and by detaining them at the courthouse and telling them to contact friends and family to pony up the money they owe.

"If private parties had created and implemented this scheme, enforced it by threatening and imposing indefinite incarceration, and milked poor families of millions of dollars, the law would punish them as extortionists and racketeers, and the community would take steps to prevent them from exploiting the most vulnerable of its members," ArchCity writes in the lawsuit. "These predatory practices are no more legitimate — and indeed are more outrageous — when state and local government actors perpetrate them under color of law."

The municipality's actions, the 50-page lawsuit charges, violate the Fourth, Sixth and Fourteenth amendments — even as it collected $6 million in revenue from 2012 to 2016.

The litigation is part of an ongoing campaign. Last year, ArchCity filed a lawsuit alleging that thirteen north-county suburbs were using the St. Ann jail as part of a scheme against clients who couldn't afford to pay court fines and fees. The judge ruled that each municipality needed to be sued individually. ArchCity suggests today's filing could be the first of many.

Its lawsuit paints a stark picture of Normandy's practices:


Thousands of people in the Plaintiffs’ position were forced to divert funds from their disability checks, or sacrifice meager earnings their families desperately need for food, diapers, clothing, rent, and utilities, to pay spiraling court fines, fees, costs, and surcharges. Whether or not valid, a citation for a minor offense—a broken tail light, a lane change without signaling—often generates crippling debts for people like Plaintiffs, resulting in jail time when they cannot afford to pay, deepening their already desperate poverty.

The summary imprisonment imposed on people who have appeared in the municipal courts of Normandy and its neighboring municipalities but who could not afford to pay the sums of money demanded has frightened many away from the courthouse, allowing Defendant to jack up the fines even further and issue arrest warrants intended to coerce payment for “Failure to Pay” and “Failure to Appear.” Month after month, year after year, the cycle has repeated itself, ensnaring Plaintiffs and those like them in a system from which it has been nearly impossible to extricate themselves.


In a statement, Roelif Carter bemoaned the situation.

“After serving my country in the Air Force I worked at Ford, one of the biggest motor companies in the world, and retired from. As a husband and father, I proudly provided for my family. After having a brain aneurysm, I couldn’t work and was on disability.

"As a black man driving, I was always a target, but with less income it got worse," he said. "Even though I’d pay the courts as much as I could from my fixed income, I was still getting locked up. This whole system in St. Louis is inhumane, and it needs to change.”