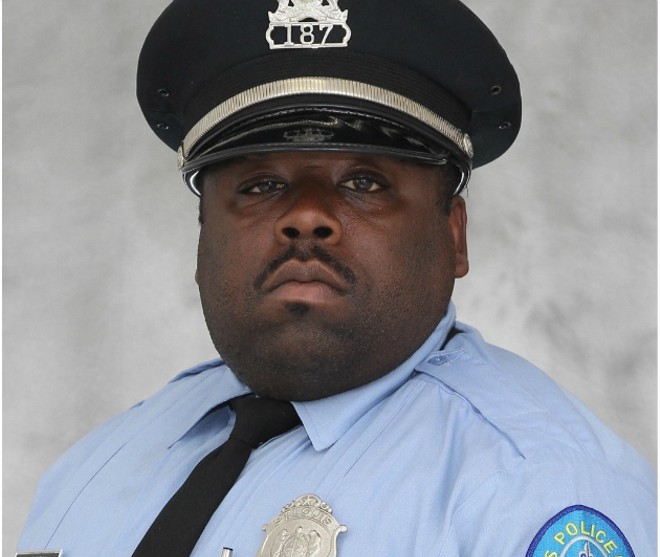 In June 2017, St. Louis Police Officer Milton Green was shot by a fellow cop while trying to help arrest a trio of car thieves.

He survived, but the shooting ended his career. Now the Ethical Society of Police hopes to help him pay his bills with a fundraiser at a cigar bar in Ferguson.


"Prior to his career ending injury, Officer Green was his family’s primary breadwinner," Ethical says in a news release. "He is now forced to apply for disability, struggling to support his family and is having a hard time meeting his children’s needs."

The shooting always sounded pretty sketchy. Green was off-duty about 11:30 p.m. when he heard a car crash outside his house in the North Pointe neighborhood. The car had been reported stolen in Maryland Heights; the incident that led to the crash began after it was flagged by a police license plate reader in St. Louis.

Cops chased the car from Broadway and Cole, near the Dome at America's Center, dodging gunfire from the suspects at they went, police say. When the thieves finally crashed, they ran and continued shooting, police say. Officers fired back, hitting one of the suspects, a 17-year-old, in the ankle.

Green lived nearby and was armed with his service weapon when he came out of his house. Yet two of the on-duty officers ordered him to the ground. He complied. The on-duty officers eventually recognized him and had him stand up and walk to them. That's when a third officer, who has not been identified, arrived and shot Green.

Lt. Col. Lawrence O'Toole, then the acting chief, initially told reporters that Green was hit in the cross-fire between the pursuing officers and car thieves. It was only the next day that the police department issued a statement saying O'Toole was working off "preliminary information" and didn't realize Green had been struck by "friendly fire."

Critics have questioned whether the shifting statements were an attempt to clean up an embarrassing episode for police. The cop who shot Green is white. In the second statement, police said the officer, "fearing for his safety and apparently not recognizing" Green, shot him in the arm.

Even by the police department's account, Green apparently complied with orders. What made him seem like enough of a threat to the officer to warrant potentially deadly force has never been explained.

At the time, the unnamed officer who shot Green was put on administrative leave. And Green, an eleven-year veteran of the force, was knocked out of his job.

There is also a GoFundMe campaign underway for the family.