Angel Stewart Won Parole in Missouri. She Still Has a Second Life Sentence in Iowa 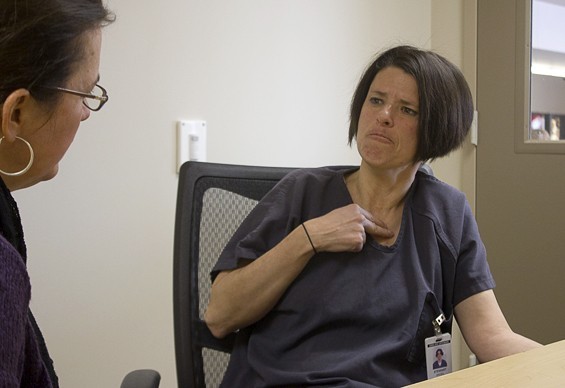 Angel Stewart's story is an unmitigated string of horrors. In 1995, the 21-year-old mother pleaded guilty to first-degree kidnapping in both Iowa and Missouri — despite the fact that she herself had been held captive and abused by the men responsible for the crimes. In fact, those men had killed an elderly woman who objected to their relationships with Stewart and a teenaged friend.

Last Wednesday, after years of advocacy by attorneys working for the WILLOW Project, Missouri granted Stewart parole from a life sentence in prison. The only problem: Stewart is not currently incarcerated in Missouri. She's in Iowa, where she has spent more than two decades serving a parallel life sentence without possibility of parole.

Stewart's case was the centerpiece of a 2015 Riverfront Times feature story by Jessica Lussenhop. The story documented how prosecutors in two states ignored or missed evidence that Stewart had been tortured and threatened in the days prior to the murders, and that the teen was an unwilling participant in the schemes of her "boyfriend," a 68-year-old career criminal named Garland "Craig" Shaffer.

In fact, in Iowa, where Shaffer killed 79-year-old Clara Baker — who had attempted to call the police on him — Stewart faced the same criminal charges as the murderer. In a plea deal, Iowa prosecutors dropped the murder charge and sentenced Stewart to life for kidnapping.

In Missouri, where Shaffer beat and killed Baker's 82-year-old neighbor Phyllis King, prosecutors did the same thing, striking a deal to drop the murder charge in return for Stewart's guilty plea on kidnapping. But in Missouri, Stewart's sentence was different in one important aspect: She was still eligible for parole.

Stewart is now in her forties. And three weeks ago, a Missouri parole board convened to consider her case.

"There were a lot of tears, to say the least. It was extremely emotional," says attorney and WILLOW Project founder Anne Geraghty-Rathert. The parole board, she says, "would have had to have hearts of stone to not be sympathetic."

As Lussenhop reported in 2015, the 1994 murders of King and Baker were the culmination of days of abuse wrought by Shaffer and his former prison buddy, Steven Bradley.

Then nineteen, Stewart had befriended sixteen-year-old runaway Angel Chamberlain. (A single mother of two, Stewart had her own history of running away, and came from a hardscrabble background.) They both met Bradley, a 32-year-old handyman, who was crashing with Shaffer in a one-room apartment in Des Moines, Iowa.

After staying in the apartment a few days, the two girls discovered the apartment door had been padlocked from the outside. In the RFT story, Lussenhop writes:


Both women say at this point they became captives, kept in separate rooms. Stewart was now Shaffer's girlfriend; Chamberlain belonged to Bradley. Over the next several days, the apartment went from a party pad to something more like a dungeon. Shaffer was drunk almost constantly. Stewart says she was beaten repeatedly with various implements. Chamberlain still can't bring herself to speak about the things Bradley did to her.

...Chamberlain told the police that Bradley used boards, whips and chains on her. Stewart says that one night, Shaffer tied her to a chair, naked, and beat her with a horse whip for some minor infraction. Investigators later found the padlock fixed on the outside of the door, and recovered the whip, two long-bladed knives and a .38 snubnose revolver.


It was the concern of two bystanders that led Shaffer to murder. A neighbor, Phyllis King, had called Stewart's mother to alert her about the teen's relationship with the older man. That threw Shaffer into a rage, and he drove to King's house to confront her.

At some point, King's neighbor Clara Baker came outside and threatened to call the police. Instead, Shaffer forced both women into his car at gunpoint, and drove them back to the apartment. That's where Stewart's role came in.


Back in the apartment, Shaffer cornered Stewart and Baker in the garage. He began to strangle Baker with an extension cord, pausing to tell Stewart to grab one end of it and pull.

"[Shaffer] made her do it," Bradley told police. "Then it was not working or something, and he told me that he had to break her neck."

Shaffer told police that while Stewart was standing there with him, he killed Baker after several attempts. He drove her body to a random Iowa interstate, then hid her underneath a chair off the side of the road.


King, meanwhile, was driven across the state line into Missouri, somewhere just north of Kahoka. There, in a remote and wooded area, Shaffer beat King to death with a two-by-four.

On June 28, 1994, police in Osceola, Iowa, arrested Bradley, Shaffer, Stewart and Chamberlain at a motel.

The entire time she was with Shaffer, Stewart had also been caring for her one-and-a-half-year-old child, Shane. She told police that Shaffer had beaten her and threatened her life and that of her baby. Still, she was charged with murder and kidnapping, just like Shaffer and Bradley. All three were sentenced to life in Iowa prisons.

Chamberlain, charged as an accomplice, served only ten years. But Stewart's situation was different; she had admitted that to pulling the extension cord around Baker's neck. She also admitted that she held a gun on both victims — and therefore Missouri charged her in connection to King's death as well.

In an interview with RFT in 2015, Stewart denied that she'd been a willing participant to the killings, and maintained that she was forced to act when Shaffer threatened to kill her and her son.

"My son was one years old when he had a gun held to his head, and I was told, 'You will do what I say or I will kill your son.' What mother ain't going to do that?" Stewart said. "I sacrificed my whole life for my son."

Psychiatric exams also indicated that Stewart was functionally illiterate, and possessed an IQ between 65 and 70, "about the mental age of a ten year old," says attorney Geraghty-Rathert, who started working on Stewart's case seven years ago.

After nineteen years in an Iowa prison, Stewart had her first parole hearing in Missouri in 2013. It was essentially a rubber-stamped "no." Her parole was denied in absentia. Five years later, Geraghty-Rathert fought to ensure that Stewart could actually face a parole board and tell her own story, appearing over a video feed from the Iowa prison.

The response from the parole board arrived to Stewart in prison last Wednesday. When Stewart sent word, Geraghty-Rathert says she called the Iowa prison herself have a guard read over the document — just in case Stewart had misinterpreted it. But she hadn't.

"We were just completely overwhelmed, crying and laughing, and just absolutely beside ourselves," the attorney says now. "It was one of the greatest moments ever."

The next step for Stewart's bid for freedom falls to her attorneys in Iowa at the Skylark Project. Those attorneys are planning to file a formal petition for clemency with the state's governor, Kim Reynolds. And unlike Missouri, where the law places no limit on how long clemency petition can gather dust, Iowa imposes a two-year deadline for the state's response.

"They've been holding off, waiting for this moment," Geraghty-Rathert says of Stewart's legal team in Iowa. Now that Stewart's parole has been granted, there's no danger of her gaining clemency, only to be shipped to Missouri for another life sentence. Now, Iowa remains the only obstacle.

Stewart knows that her fight isn't over yet.

"She understands that there's still a fairly significant hurdle," Geraghty-Rathert says. "But not nearly the hurdle that Missouri was. That was the big one."

For the full story of Stewart, and why problematic cases like hers are so often mishandled, read Lussenhop's cover story, "After Years in Prison, Angel Stewart and Other Victims of Violence Ask for Mercy."