St. Louis Has Some of the Nation's Highest Wage Disparities 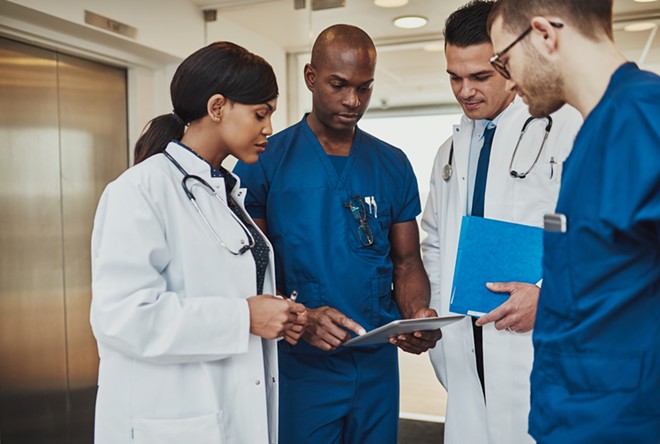 A new study released this week suggests St. Louis has among the highest wage disparities in the U.S. — with a greater differential between the highest and lowest paid workers than all but five other metro areas.

The study by Commercial Cafe looks at the highest paid profession in each the nation's 50 largest metro areas, as well as the lowest paid one, according to the federal government's Bureau of Labor Statistics. Then it calculates the difference between them.

And, shockingly, it wasn't your extravagantly-price San Franciscos and New York Cities that topped this list. Certain high-paid professions, it turns out, are highly paid everywhere. (Physicians, we're looking at you.) And in more expensive areas, we can only posit, they can't get away with blocking minimum wage increases like the legislature did here.

The difference between the two is a staggering $264,680 annually — a bigger disparity than all other metro areas except Miami-Ft. Lauderdale, Boston, Charlotte, Pittsburgh and Milwaukee.

Interestingly, Missouri showed far less disparity. Statewide, orthodontists are the best paid, with $271,750 annual wages, while lifeguards and other "recreational protective workers" bring up the rear. There's a $252,780 difference between them. But overall, the state's wage disparity was strictly middle of the pack — the higher paid anesthesiologists, surgeons and, yes, orthodontists in other states left Missouri's wage gap at No. 29 of 51.

Which state had the highest disparity? Alabama, where orthodontists make $271,360 more than food prep and service workers. The lowest? West Virginia, where physicians and surgeons just don't make enough ($239,630, on average) to properly dwarf the state's gaming dealers.

The study hopes to call attention to the income inequality that's now rampant across America.

For decades, income inequality has mainly been a talking point among academics and pundits. Recently, the issue has found its way into the public discourse, although opinions on the real causes, extent and, above all, measures that would need to be taken to address it vary considerably. A rising tide may lift all boats, but Americans have seen modest wage growth since the 1980s. Those in the highest wage percentile have enjoyed a disproportionately large part of that growth, while those working jobs that have registered a significant spike in productivity have received only modest rewards in the form of single-digit wage increases. With the added strain of automation for both blue-collar and some white-collar occupations, the future will require complex solutions to help workers find their way in a changing labor market, and to better reward those offering essential services.

And, as the study shows, it's not just Silicon Valley or New York City where the rich are getting richer and the poor struggle to get by. In fact, St. Louis' wage disparity may be even bigger than in the metro areas thought of as bastions of inequality.

Something to think about.