The St. Louis Circuit Attorney today filed felony charges against a city cop who cracked a retreating man's jaw with his flashlight.

Officer Adam Feaman, 40, was charged with second-degree assault and armed criminal action in the August 14, 2017, beating of Jamal White, court records show. A judge issued an at-large warrant for the officer today, and police say Feaman is not yet in custody.

As the RFT detailed last week in a story published in collaboration with the non-profit GRAM, Feaman was captured on video by a bystander as he confronted White, apparently for playing loud music on his car stereo.

As Feaman shouted he was under arrest, White broke into a nervous jog, questioning what he had done: "How am I under arrest?" When Feaman caught up to him, he struck White in the face, cracking his jaw. As White fell to the ground, Feaman again struck him in the back of the head with the flashlight, yelling, “Get on the fucking ground!”


As freelancer Clark Randall detailed in the story, Feaman had been the subject of numerous other complaints in recent years. In 2010, a 22-year-old black man filed a complaint alleging that Feaman pulled him over and used racial slurs against him. A year later, a 22-year-old black man complained that Feaman planted drugs on him, and that while Feaman arrested him, another officer hit him in the face multiple times.

When asked if disciplinary actions had ever been taken against Officer Feaman, Sgt. Keith Barrett, a spokesman for the department, said those records were closed. 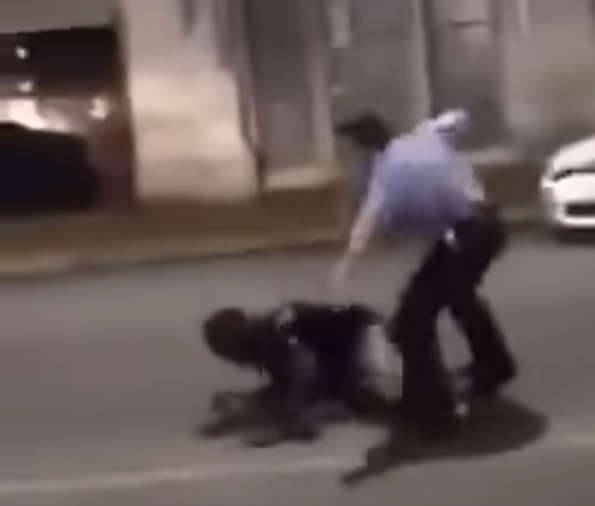 Attorney Jermaine Wooten obtained the video from the bystander. He filed suit against Feaman in federal court.

In the lawsuit, Wooten wrote that Feaman spotted White at a local bar or club on September 30, 2017, one month after the flashlight beating. Apparently having heard that White planned to sue him, he threatened to “crack [his] jaw again.” Feaman had to be escorted out.

Rather than explain himself in deposition, Feaman refused to answer any questions. (He also declined to answer whether he was invoking his Fifth Amendment right against self-incrimination, or explain why he was not answering.)

Wooten later dismissed the federal suit, but said he intends to refile in state court.

Feaman's bond was set at $30,000 cash, according to the warrant issued today.

Police refused to release his department photo Wednesday but did release his mug shot the following day. He was suspended today from the force.

In a statement, the department said, "The Metropolitan Police Department fully cooperated with this investigation and is committed to ensuring the men and women of our Department are held to the highest standards. The Department will continue to be vigorous in our efforts to uphold these standards and hold any persons whose actions may compromise the integrity of the organization accountable."

Editor's note: We updated this post one day after publication to include Feaman's mugshot.