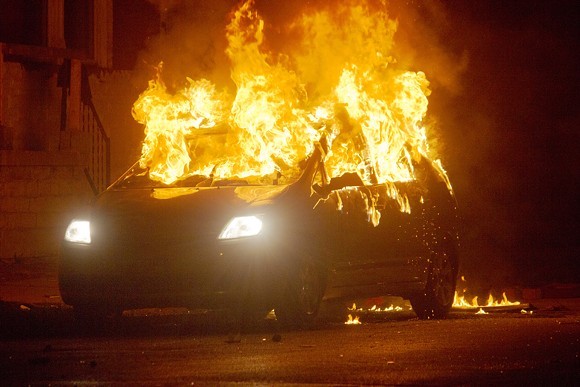 The family of an eighteen-year-old shot by St. Louis Police in August 2015 have filed a lawsuit against the city, former Police Chief Sam Dotson and two officers.

Mansur Ball-Bey was shot on a weekday morning in the city's Fountain Park neighborhood after he ran from officers executing a search warrant at 1241 Walton Avenue. Chief Dotson later claimed at a press conference that the teen had pointed a gun at officers, and they fired back.

But the suit says Ball-Bey was unarmed. It alleges he was walking with a fourteen-year-old friend in the alley when he was spotted by the officers, who'd been assigned to cover the Walton Avenue home's backyard. The two teens took off running; the cops gave chase. After his younger friend hid behind an abandoned car, the suit says, the cops shot Ball-Bey in the back, severing his spinal cord.

Ball-Bey had no criminal record, the lawsuit says. He was a youth leader at his church and worked for UPS.

At the time, neighbors and activists who questioned the official narrative took to the streets. A car was set on fire. After police gave what the ACLU would later characterize as "a muffled dispersal order," they fired tear gas and smoke grenades at residents. The ACLU filed suit over the department's actions last year, saying it violated protesters First Amendment rights.

The more recent suit, filed in federal court Friday by attorney Jermaine Wooten on behalf of Dennis Ball-Bey, names officers Kyle Chandler and Ronald Vaughn in addition to Dotson. It accuses them of "unreasonable seizure" in the taking of Dennis Ball-Bey's son and "intentionally causing" the teen's death by "responding with inappropriate force." It also names the city and Dotson for failing to train, supervise and control the officers.

Circuit Attorney Jennifer Joyce announced in 2016 that she would not pursue criminal charges against the officers, calling the incident "a tragedy in every sense of the word." The 43-page report released by her office found "insufficient evidence to prove beyond a reasonable doubt that the two officers didn’t shoot in self-defense, as they contend."