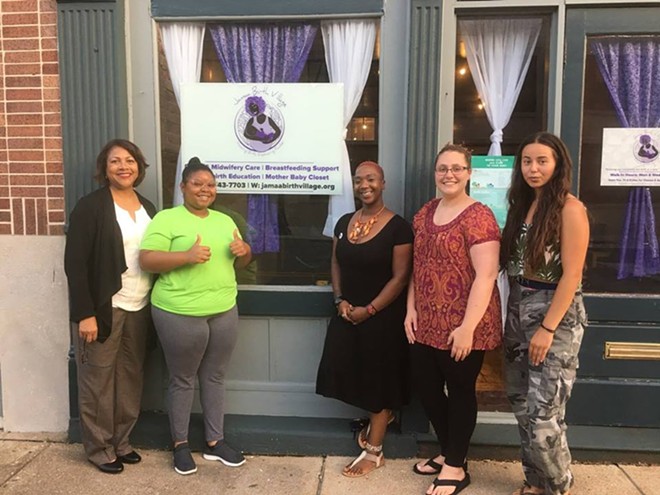 In recent months, the high mortality rate for black women giving birth has become a growing national concern. From reports by the Centers for Disease Control and in-depth reporting by the New York Times to Serena Williams' widely publicized personal horror story, the rate of pregnancy-related death for black women — which is three to four times higher than their white counterparts — is finally gaining attention.

For Brittany "Tru" Kellman, founder and executive director of the Ferguson-based Jamaa Birth Village, the awareness is welcome. But she can't help but be a bit frustrated by the way things are playing out.

"It's like, 'Finally!'" she says. "But in terms of money going into it, it's going to huge organizations with huge budgets, people having talks about it and strategically planning how to change it. There's hardly any money going to organizations providing direct care and who can actually change what's going on."

Kellman was just thirteen years old when she found herself pregnant — and, like so many black girls and women, she found herself being attended to by doctors who wanted to tell her what to do rather than listen. Her labor was induced early to accommodate her physician's vacation — and she ended up having to get a Cesarean after complications developed. (The risk of "several maternal morbidities" increases threefold with C-sections.)

It was many years later that she began to fully understand some of the choices that had been made for her. "Depression led me to study more — to deal with my depression and my anger," she says. "I was learning about women's wellness, and when I learned about midwifery, it fit like a glove." After a successful vaginal birth for her third child, she herself became a doula, assisting other women in their birthing journeys — and is on a full scholarship at the Midwives College of Utah. When she graduates in December, she'll be the first black woman to become a "certified professional midwife" in Missouri.

In the mean time, in 2015, she founded Jamaa Birth Village. It's a true labor of love — the organization is entirely volunteer-driven, and even Kellman takes no salary. But it's achieving big results. The non-profit has worked with more than 250 families, helping guide them toward low-intervention births and address their specific physical and emotional needs. It also works to train more doulas of color; more than 30, Kellman says, have come through its program. Next year, the organization plans to open St. Louis' first equal-access midwifery clinic, helping people regardless of their insurance status. She can cite studies showing the methods Jamaa is using have made a real difference for women of color in Florida; she's certain they're on their way to similar outcomes in St. Louis.

As a part of those efforts, the organization recently got a major opportunity: After working out of a suite, it has a real chance to get a building of its own for an incredibly good price. It just needs $60,000.

It happened like this. Kellman had long had her eye on a building in Ferguson that the SSM health system was operating as a clinic. When SSM left the space, Kellman learned that the local physician who owned the building was hoping to sell it — and, while it wasn't on the market, that he would be asking approximately $200,000. She cheekily suggested that he avail himself of the tax benefits of virtually donating it to Jamaa. "Would you consider allowing us to pay $50,000 rather than $200,000 and you can write it off?" Unsurprisingly, he told her "absolutely not."

Just one month later, though, he had a change of heart. "If you're still interested," he told Kellman, "I think we've got a deal."

That was in June, and for the last two months, Jamaa Birth Village has been excitedly planning for its new home — and running a capital campaign aimed at raising $60,000 in 60 days. The only problem is this: The campaign wraps at midnight on Friday, August 17, and as of the night before, they'd taken in just $12,000.

No matter what happens in the final hours, she says, the organization is getting that building. "This work needs to be done, and we're going to do it," she vows. But she'd much prefer to pay the organization's share in full, not have to get a mortgage and put that pressure on monthly expenses. She continues to hope for a miracle.

Going from a terrified pregnant teen to a woman who's running a successful organization with all too few resources isn't for the faint of heart. Tru Kellman isn't a woman who gives up hope easily. "I'm not one bit disheartened," she says on the night before the campaign's official closure. "I will ride forth until midnight tomorrow — and keep going until the end of the month."

But more financial supporters would be incredibly welcome. Of the buzz around race-based disparity in pregnant and laboring mothers' mortality, she notes, "I've heard a lot of people being excited about the issue. A lot of those same people, we're not seeing them contribute. But I'm not going to focus on that. I'm going to focus on what we're doing, and what's right."

For more on Jamaa Birth Village's capital campaign, please see its GoFundMe. For more on the organization, see its website.