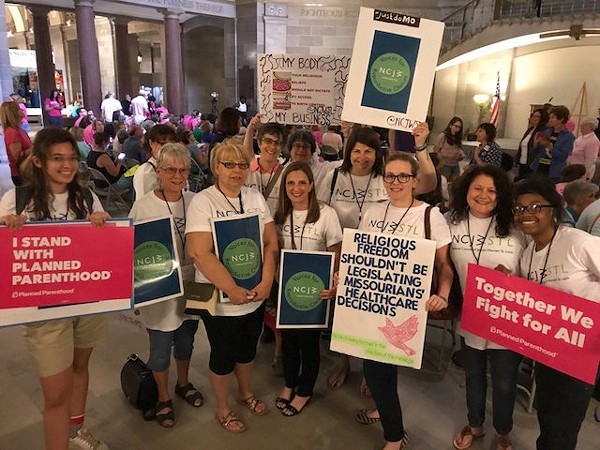 In July, the Missouri Democratic Party voted to add an amendment to its platform welcoming "a diversity of views on abortion." But it didn't leave the welcome mat out for long: On Saturday, the state committee reversed course, voting overwhelmingly to delete the controversial addition.

The July amendment, which was pushed by former state Representative Joan Barry (D-St. Louis County), had been a last-minute amendment to the work of the party's platform committee. It was emailed to members one day before a scheduled vote on a new platform — and the vote ended up taking place on a day that many party activists had already committed to being at immigration protests. After its narrow 31-25 approval, anger ran high.

And perhaps that's one reason the vote to strip the amendment's language just one month later wasn't even close. Even Barry voted abstained rather than voting no. (An unofficial tally live-tweeted by Planned Parenthood staffer Sarah Felts listed sixty-one in favor, two abstentions, and none opposed.)

Stephen Webber, chairman of the Missouri Democratic Party, said this in a statement:

Missouri Democrats are strongest when we fight together. We saw that on Tuesday when we worked together to resoundingly defeat Prop A and we saw that at our State Committee meeting today when our members stood united to pass a platform that clearly demonstrates our Party's unwavering commitment to defend the right of all Missourians to access reproductive health care without interference from the government.

Democrats will continue to fight [to] defend the full spectrum of women’s reproductive rights ensured in Roe v. Wade, including the right to safely end a pregnancy, to safely carry a pregnancy to term, and the right to raise your family in a safe and healthy environment.


The amendment approved in July read, ""We respect the conscience of each Missourian and recognize that members of our party have deeply held and sometimes differing positions on issues of personal conscience, such as abortion. We recognize the diversity of views as a source of strength, and welcome into our ranks all Missourians who may hold differing positions on this issue."

Today, the platform's section on abortion reads, “A woman’s right to choose and the right of every person to their own bodily autonomy and to be free from government intrusion in medical decisions, including a decision to carry a pregnancy to term, and oppose any efforts to limit access to reproductive health care.”

Some party activists praised the reversal this weekend.

Doing the right thing is what we expect @MoDemParty. Good job on fixing what should never have been a problem. On to November! #TrustWomen


When women organize, women win! Thank you to everyone who worked so hard to make sure reproductive rights made it back into the @MoDemParty platform. #MDPReproRights https://t.co/lgpsMKXVbU


However, not all those running as Democrats have signed on to its tenets. Representative Stacey Newman (D-University City) estimates there are at least a dozen pro-life Democrats in the Missouri House alone. The group has continued to find success with voters. Just last week, in the primary race to fill the south city seat being vacated by Fred Wessels, pro-life Steve Butz beat a pro-choice candidate.

In a statement, the national organization Democrats for Life of America bemoaned the Missouri Democratic Party's decision. "Missouri pro-life Democrats are real Democrats who support labor and helped to defeat the right-to-work proposition this week," it said. "They support health care, a living wage, and a host of other issues on which all Democrats agree. We want to be in this party, and we will wait for a clear statement from Chairman Webber on where we stand.

"Pro-life Democrats have stayed in the shadows and have been taken for granted long enough. We must be recognized and heard. Right now, we are hearing that current leaders of the Democratic Party do not want us and we should look elsewhere."

Editor's note: We've updated this story to describe Joan Barry's vote on the decision to delete her amendment. She abstained; she did not vote no. We regret the error.