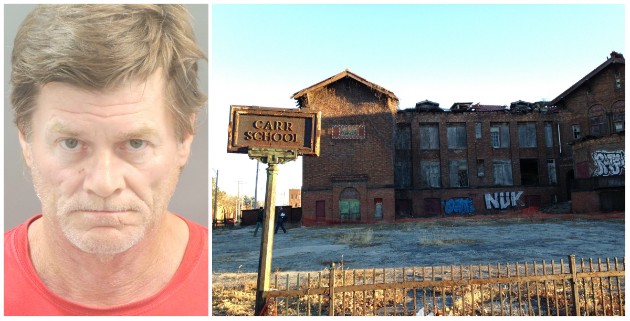 A man who attacked four homeless people with a hammer last year has been sentenced to serve four life sentences in prison.

Edward "Texas" Moore, 62, represented himself during three days of trial in June — and was quickly convicted on the morning of the fourth day. It took jurors just two hours to find him guilty on all eight felony charges.

Moore had previously served 25 years in prison for an assault in 1990 in St. Louis County. He was still on parole on the morning of July 22, 2017, when he ambushed people sleeping in the abandoned Carr School north of downtown. The ex-con apparently suspected they had stolen from him, and he took revenge with a hammer and a stick while they slept, authorities say. He bashed three of them, and when a fourth man tried to intervene, Moore clobbered him, too. A police officer previously told the RFT the place where it happened inside the crumbling school was slicked with blood. All four of the victims survived.

During today's sentencing hearing, Moore bizarrely told Judge Elizabeth Byrne Hogan he was pleading the fifth when she began to swear him in.

"I will not answer any questions," he said as he stood shackled before the judge.

Byrne Hogan pushed on, dismissing the ten-page motion for a new trial that Moore previously filed before she sentenced to him 30 years to life on each of the eight counts. She ruled that the sentences for four of those counts — each for a charge of first-degree assault — would be served consecutively.

In court, Moore chose not to contest any of the arguments made by Assistant Circuit Attorney Peter Bruntrager, and he grinned slightly as a sheriff's deputy led him back to his seat when it was over.

Moore is a big man with broad shoulders that he repeatedly hunched up to his ears while waiting for proceedings to begin. Police records at the time of his arrest listed him as six foot one and 200 pounds, although he has written in one of his many, many motions that he has put on another 30 pounds from eating starchy jailhouse food.

Moore had tried to paint his victims as liars or at least untrustworthy, alleging they'd partaken in long-term drug and alcohol abuse. It apparently did not persuade the jury.