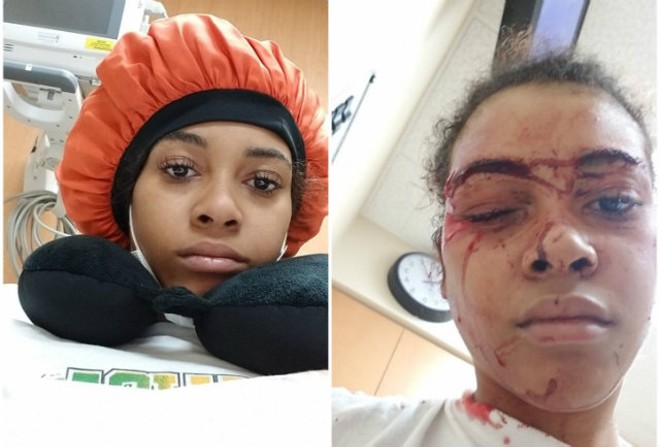 A 25-year-old St. Louis woman went to the hospital for stomach pains — but instead ending up being charged with assault after what her attorney says was an unprovoked attack by hospital security.

Vanity Allen, who lives in north county, checked in to SSM Health DePaul Hospital in Bridgeton on July 27. But after being medicated for her stomach pain, and having an IV port installed, she felt overheated and sought fresh air outside. There, she was overcome by pain and sank into a nearby wheelchair.

When a security guard began interrogating her, her attorney says, she put out her hand to communicate that she didn't want to be touched. Instead, she alleges, she woke up in the emergency room with her left eye swollen shut and a deep gash above it.

Allen, who stands five feet tall and weighs less than 100 pounds, is being represented by media-savvy Clayton attorney Albert Watkins. He says that Allen is frank about having put her hand out in hopes of getting the security guard to back off. "You don't want anyone to touch when you're in severe pain," he notes. But the guard, in his telling, grossly overreacted. When Allen said she didn't want to be touched, Watkins says, he responded along the lines of, "Oh no, ma'am, you're going to jail."

When Allen came to, she was handcuffed to a hospital bed. She still managed to take a photo of her own bloody face (see above) and send it to her sister, who had been desperately looking for her.

Watkins says a witness "has confirmed" that the much larger security guard, a white male, "forcefully struck Allen over her left eye with his fist, opening up a significant gash over Allen's left eye and sending Allen spinning to the right as she lost consciousness and collapsed face-first to the concrete sidewalk below."

In a statement, the hospital said this:


SSM Health DePaul Hospital is committed to providing the best care possible to every patient who comes to us and to ensuring the safety of all patients, employees and visitors. Due to federal patient privacy laws, we are unable to provide details of any patient’s care. This incident is under investigation by Bridgeton Police, and we will continue to cooperate with their efforts.


Watkins says he believes DePaul's security cameras captured the incident on video, and that it has been turned over to the police.

“We expect to receive the video from law enforcement. Our client is committed to transparently ensuring the public is aware of that which has occurred and taking this opportunity to ensure that others in like position are not shamelessly beaten when seeking health care,” Watkins said in a press release.

The Bridgeton Police Department has charged Allen with a municipal ordinance violation of assault in the fourth degree. However, Bridgeton Captain Dennis Fitzgerald tells the RFT that such charges don't reflect an investigation on its part. If a complainant — in this case, SSM DePaul Hospital — files a report alleging a low-level assault like this one, it's forwarded to the courts to be sorted out there.

"They sign a complaint and we forward it to the court," he says. "We don't adjudicate it."

Watkins says Allen has a court date in October. But things could get complicated before then. He says it's "safe to say" he will be filing a lawsuit against the hospital.

He notes that his client doesn't drink or use drugs. She's attended both community college and Mizzou. At the time of the incident, she had just put in her notice at a long-standing job through a temp agency, handling patient pre-registration for Washington University, in order to take a new job in Phoenix.

Instead of moving to Arizona, he says, she's now focused on healing, and has remained in St. Louis where she has family. "Her eyeball was opened up pretty significantly," he says. "She didn't break any bones, but there was concern about her retina. It looks like she's going to heal up, but in the mean time, she has been in some pain."

He says his client is "a smart girl" who had never previously been arrested — and that he's stunned by the treatment she received.

"A rabid dog is treated more humanely than that which Ms. Allen endured," he says.