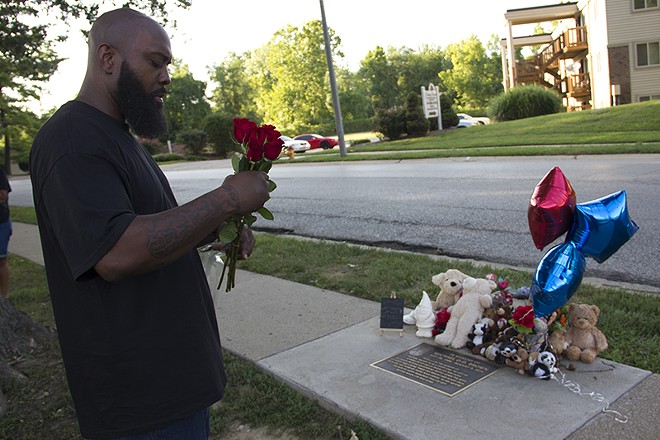 The stretch of Canfield Drive where Michael Brown died has seen many versions of memorials: stuffed animals and flowers, postcards and mementos, the items laid gently by the side of the road or placed along a line of roses tracing the part of the street where, four years ago, the eighteen-year-old was shot and killed by Ferguson police officer Darren Wilson.

On Wednesday evening, the eve of the fourth anniversary of August 9, 2014, Brown's father, Michael Brown Sr. watched the memorial take shape once again.

"It definitely lets you know he touched a lot of lives," he says. Over the years, he's watched the memorial be rebuilt multiple times — not just for the occasion of the anniversary of his son's death, but in instances where it had been destroyed through malice or accident.

"I still miss him. I still think about him. I still want something done about the situation," Brown Sr. adds. He's holding a white ceramic garden gnome — the sort of gift his son would have appreciated.

"He always had things up his sleeve," Brown Sr. says. He remembers the time his son gave him a tie, a $2 item from Goodwill. "It was ugly," Brown Sr. says now, smiling. "He was always a jokester. He knew what he was doing."

Brown Sr. walks down the street, away from the line of roses marking the place where Wilson confronted the teenaged Brown nearly four years ago. He comes to a tree-shaded spot where a memorial plaque is set in the sidewalk, and there he places the gnome among a collection of stuffed animals.

There's a a renewed significance to this year's anniversary, and it goes beyond the rebuilt memorial or events planned for today and this weekend. On Tuesday, St. Louis County Prosecutor Bob McCulloch — who many consider the architect of the grand jury's no-bill of officer Wilson — was handed a surprise primary loss by Ferguson city council member Wesley Bell.

McCulloch's departure is something Brown Sr. has long waited for. But Brown Sr. also suggests that, with a new prosecutor on the horizon, there's opportunity to reopen the case against Wilson.

Granted, that would mean Bell would have to act counter to the U.S. Department of Justice, which concluded that there wasn't sufficient evidence to bring charges against the Ferguson officer. Still, Brown Sr. plans to reach out to Bell, and he hopes the incoming prosecutor will give him the resolution McCulloch wouldn't.

"People know that what happened wasn’t right, and this does give another chance at going back to court," Brown Sr. says. "We will see."