Wesley Bell's Win Surprised Everyone — Except His Campaign 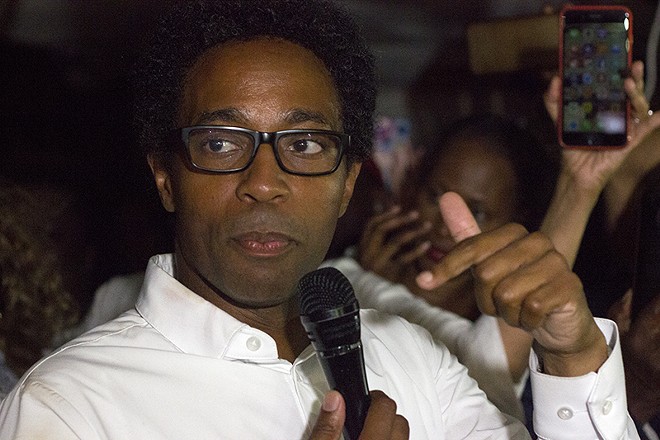 In a strip mall parking lot in St. Ann, two campaign volunteers for Wesley Bell toss a Frisbee back and forth across the dark asphalt. It is 9 p.m., roughly two hours before St. Louis County Prosecuting Attorney Bob McCulloch will concede his first-ever election loss to upstart Bell. Instead of cruising to an eighth term, the pro-police prosecutor, who generated national controversy for his handling of the Michael Brown shooting, will be headed to defeat.

At this point of the night, though, most of Bell's supporters are posted up at a nearby Mexican restaurant. They're watching laptop screens, refreshing their smartphone's browsers and studying the TVs tuned to local and national news. Many have that election-night look, simultaneously intense and hesitant. It's a gambler's look. A dreamer's.

Bell's campaign manager Josi Nielsen, one of the Frisbee-throwers, does not have that look. She's remarkably calm. She says she already knows how the election will end.

"I’ve been saying for it two months," she remarks. "We won."

With so few votes counted, it sounds like a bit campaign bluster, something to tell the volunteers to get them to knock of a couple more doors on a weekend. It's a bold stance for election night, especially considering that Bell is an underdog's underdog — McCulloch won seven previous elections on a law-and-order platform, and this time around he again took the endorsements of local unions and both the county and city police officers' associations. Beyond that, just 24.7 percent of county voters are black.

Bell, a Ferguson city council member and municipal prosecutor who has never prosecuted a criminal case, was an easy target for McCulloch's criticism. He wasn't experienced enough for the job of running a 60-prosecutor office, McCulloch told interviewers, dismissing Bell as a prop being used by meddling activist groups that didn't really understand the justice system.

Bell challenged that critique at every turn. He promised to reform the county's use of cash bail and increase diversion programs. His campaign also sought to make the election a referendum on the events of Ferguson four years ago, when McCulloch gained national prominence — and infamy — for his handling of grand jury investigation into the the fatal police shooting of Ferguson teenager Michael Brown, which ended in a no-bill against the officer.

It was a potentially risky strategy. A generation of St. Louis County voters had returned McCulloch to office again and again, and some observers speculated that Bell's campaign would turn those voters off with talk of bail reform and respect for protesters.

In reality, though, Bell didn't need McCulloch's voter base. He had his own.

Inside the campaign office, Bell looks somewhat shell-shocked. The absentee ballot numbers have just come in, and Bell is currently in the lead.

"Myself, my staff, our volunteers, we’ve been working our tails off. We’ll see how it turns out," he says, leaning his shoulder against a nearby pillar. "Hopefully it was enough."

On Sunday, Bell had visited ten area churches. In the past several months, he attended panels and debates — and often, he was the only candidate to show up. For Bell, the campaign has been a marathon grind of door-knocking, speeches and phone calls. Now, for better or worse, the finish line is at hand.

So, how is he feeling?

"Well, we're ahead," Bell answers, though he quickly adds, "but there's a long way to go. It's a little stomach-turning, but, you know, we’ve been fighting for six months. So a few more hours, I’ll be alright."

On the other end of the strip mall, at the Acapulco Restaurant & Lounge, supporters are crammed into seats and clumping beneath the available TVs. Several are ringing golden bells — a campaign gimmick (Bell = bell, get it?) — and roaring in unison every time an update comes up on screen.

The updates are good. More than 35 percent of voters turned out, a high percentage, and hopes begin to soar. Supporters still have that election-night look in their eyes, but they're smiling at each other, passing around phones showing the latest numbers, their expressions saying, This might actually happen. We might pull this off. Because there is no Republican challenger, the winner of the Democratic primary is virtually guaranteed the seat.

Indeed, while McCulloch had his unions and police officers,
Bell's campaign marshaled a coalition of groups. The ACLU, which didn't formally endorse a candidate, still poured $244,000 into radio ads, phone calls, digital ads and door-to-door canvassing — a first for the civil rights organization. Last month, through a collaboration with Justice Collective, the ACLU also released a trove of jail data that clashed with McCulloch's oft-repeated claim that, "There's nobody in St. Louis County in jail being held on a misdemeanor because they can’t make bond." It turns out there are hundreds.

Local activist groups took up Bell's mission, too, among them the Organization for Black Struggle, Action STL, Ferguson 1000, Mobilize Missouri and Indivisible St. Louis. National groups, including Democracy For America, MoveOn, Color of Change and Real Justice, threw their weight behind Bell as part of their push to reform prosecutor's offices across the county

Still, as the clock ticked past 10 p.m., there was still a feeling of unease at the watch party. In 2017, many of these same activists had backed St. Louis Treasurer Tishaura Jones' mayoral campaign, and had felt the surge of confidence as early returns showed promise — only to get beaten by fewer than a 1,000 votes.

Jones is here at Acapulco, chatting with activist and ActionSTL leader Kayla Reed. On that 2017 election night, the two embraced in defeat. At the time, both said that the dream wasn't dead, just deferred.

"I’m excited, but I’m always nervous until the last vote is counted," Jones says now, nearly shouting to be heard above the crowd and DJ. But even she can't contain her optimism.

"People are waking up," she says. "They always try to say that the 'Ferguson Effect' is a bad thing. This is the good part of the Ferguson Effect, this is what it's all about. Making sure that we elect people that represent people's interests, the people's morals. Young people running for office, changing the guard in these officers that have been held by the same person for decades."

By 11 p.m., the noise in the restaurant is near-deafening. With 89 percent of precincts reporting, Bell has a commanding lead of around 55 percent of the vote. When Bell finally walks in, the sound of hand-rung bells erupts like a choir.

Bell doesn't join the crowd, not yet. He's on the phone, intently listening and pacing on the bar-side of the restaurant. At one point, the crowd roars again, and Bell whips around to stare at the TV — but it's just another recap of the existing numbers. Ninety percent of precincts are reporting, with Bell on top. He takes another call, his face drawn and serious. It's still not final.

And then it is.

Suddenly, Bell is wrapped in a bear hug with adviser Mark Kustelski. Off to the side, Bell's campaign manager, Nielsen, looks dazed and exhausted. She closes her eyes and silently leans against a volunteer's shoulder. From the other side of the restaurant, the chants of "Bell! Bell! Bell" come thundering through the wall. So he goes to them. He squirms through the crowd, mounts the stage and begins to deliver a victory speech that few, if any, conventional political observers predicted.

He thanks the numerous groups represented before him. He says his campaign promises are going to be reality — expanded diversion programs and an end to cash-bail for nonviolent offenders.

"If we're going to push these changes," he tells the crowd, "I need you to be a part of that too. When people say, 'Oh, he just wants to let all the criminals go free,' man, have my back and tell them what we're doing."

"Lets keep this momentum going," Bell says, after rattling off a few more thank-yous. "So we can bring change to this county; so that we can be change that's not only going to make people safer, but help people, help families. This is too important, this matters too much, so let's keep moving and pushing St. Louis county, the region, the country, forward. Thank you so much."

As the applause crashes down, Bell pauses and smiles. He raises his hand to calm the crowd one last time, and raises the mic to his lips.

"And," he says, speaking slowly. "I will say, that... it is an honor to be your next St. Louis County prosecutor."

His smiles again, and drops the mic. The only sound now is the sound of cheering, and the ringing of bells.