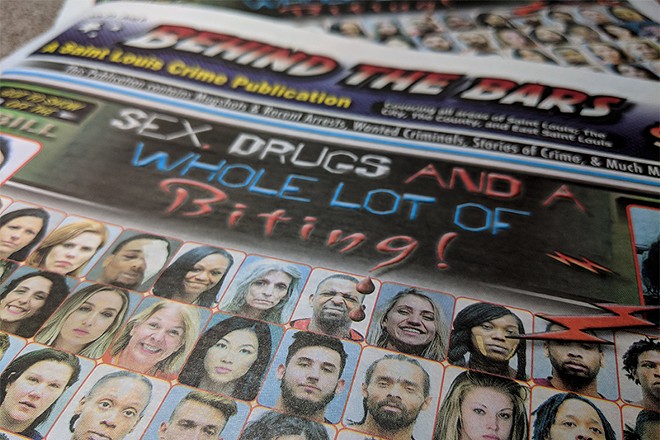 What's the price to salvage a ruined reputation? For a St. Louis County man who sought to have his mugshot removed from STLMugshots.com, the offer came to $500.

That allegation appears in one of two lawsuits filed today in St. Louis City Circuit Court. The suits allege that the website, which adds mugshots for dozens of local criminal defendants every day, actually functions as platform for public shaming — and extortion. The lawsuits represent the first legal salvo against the site from local attorney Justin Meehan, who says he's committed to exposing the website's shady owners.

But the issue of STL Mugshots' ownership is a tangled one. The site's domain is registered through GoDaddy.com, and the actual owner is obscured by a nameless proxy organization based in Arizona.

"It's so convoluted, it goes from one server to another," Meehan says. The owner, he adds, "has gone out of his way to obscure any connection with anybody and the website."

Yet Meehan believes he's identified that elusive owner as a St. Louis resident named Edmund Tauk. He is named as a defendant in the two lawsuits Meehan filed today.

It was Tauk, one of the lawsuits alleges, who engineered the $500 offer to a St. Louis public school teacher named Kevin Boone. Boone's mugshot first appeared on the website in August 2014 in connection to a citation for failing to register a vehicle.

Boone had no idea his mugshot had been published, only discovering it in 2015 after he was notified by his students and coworkers. According to the suit, Boone called a number on the STLMugshots.com website to get the photo and information removed, which purportedly led to a phone conversation with a third party.

According to Boone, the unknown caller said there was a way to remove the mugshot, but it would cost him $500. The person on the phone directed him to meet a man at the Justice Center in downtown St. Louis.

"Mr. Boone was skeptical," says Meehan. "He asked, 'Who am I supposed to give the cash to?'"

Boone turned down the offer, and today his mugshot and arrest details are still present on STLMugshots.com. The page includes his age, his ZIP code, booking date and charge. Just below the photo and charge, the page features an advertisement for background-check website Intelius. Lower down, on the page's comment section, a person claiming to be one of Boone's past high school students mocked his former teacher, writing, "Should has stuck to the bus!"

The info available on the website has caused Boone to suffer "extreme embarrassment, loss of reputation [and] public humiliation even until this day," the lawsuit contends. The suit is seeking at least $25,000 for actual and punitive damages.

The second lawsuit involves a woman who also discovered her picture on STLMugshots.com. The plaintiff, Jardena Green, had been arrested in 2015, but she claims that her arrest only came after a summons was sent to the wrong address, causing her to miss her court date for the initial charge for failing to register her vehicle — and the case was eventually dismissed by the Hanley Hills Municipal Court, the lawsuit notes.

Green contacted a website advertised on STLMugshots.com — a site that just so happens to promise to take down mugshots for a fee. (In the lawsuit, Meehan alleges that this site, too, is controlled by Tauk.) According to the lawsuit, an unnamed representative responded to Green, and "communicated by email that the posting would only be removed if it was proven that the information was either incorrect or dismissed."

Eventually, Green's mugshot disappeared from STLMugshots.com, but the details published by the site continued to exist on Google — though it appears that, as of this writing, her mugshot has been delisted from the search engine's results.

Green is also now seeking at least $25,000 in damages from Tauk.

There's still one looming problem: Tauk insists that he's not the person behind the STLMugshots.com. Tauk made the denial last month when he was confronted in a parking lot by Fox-2 film crew and investigative reporter Chris Hayes.

"One-hundred percent not me," Tauk told Hayes. "Prove it to me that it’s mine. It’s not mine." 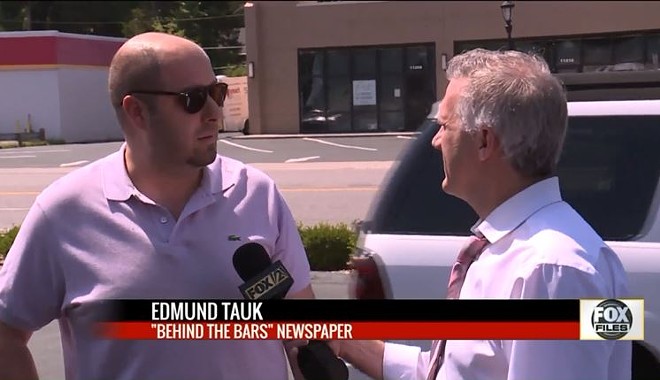 But Hayes dug deeper into Tauk's claims, and found holes. For one thing, Tauk is the registered owner of Behind the Bars, a bi-monthly newspaper that can be found in gas stations across the city. The newspaper features pages upon pages of mugshots, many of them identical to the ones posted to STLMugshots.com.

During the Fox-2 interview, Tauk claimed that he obtained mugshots for his newspaper by filing Sunshine requests with St. Louis city and St. Louis County, in addition to local jails. What Tauk described would be legal — after an arrest, a mugshot is considered an open record for 30 days, and then becomes sealed pending a prosecutor's decision to file charges.

But according to Hayes, city and county officials said they'd gotten no public records requests from Tauk. Neither did the jails. If Tauk wasn't filing mountains of Sunshine requests, how was he filling his newspaper's pages with mugshots?

That discrepancy led to another mystery about STLMugshots.com: The website appeared to be obtaining the mugshots on the day of the actual arrest, and then uploading them almost immediately.

Hayes found some answers in the Regional Justice Information Service, or REJIS, which is a government entity that typically collects arrest records to provide to law enforcement agencies. REJIS, it turns out, has also been supplying Tauk.

A county spokesman confirmed to Hayes that REJIS has been selling "every daily St. Louis County mug shot" to a select list of buyers. That list includes two customers. The first, Kyle Prall, is Texas man who runs a national mugshot website called Busted Mugshots. The second is Edmund Tauk.

The price for the exchange is reportedly $200 each week. In a Facebook post, Hayes explained that REJIS has set up a system that provides Tauk secure access to a constantly updated database of mugshots and arrest details. That's the source of the content found in the pages of Behind The Bars — but is it also the source behind STLMugshots.com?

At the moment, Meehan acknowledges that he doesn't have clear evidence to prove that Tauk is running both Behind The Bars and STLMugshots.com. (We reached out to both entities via email, but didn't hear back before publication; we'll update this post if we hear back.)

The issue isn't just the lawsuits. Thanks to a 2014 law signed by then-Governor Jay Nixon, it is illegal in Missouri for any entity that publishes criminal record information — such as mugshots — to turn around and charge people to remove that same information. The law effectively criminalized the sort of transactions that Meehan alleges is at the heart of STLMugshots' business model. Violators can face Class-A misdemeanor charges.

Despite the lack of a smoking gun, Meehan says the connections between Tauk, REJIS and Behind The Bars presents enough compelling evidence to take the case to court. And in court, Tauk won't be able to brush off questions quite so easily.

"I'm dragging him in into the ring," says Meehan. "We're going to use legal procedures to get to the bottom of it, and I think that through the process of discovery, we'll eventually be able to force him to respond under oath."