Joe Biden Was Everywhere in St. Louis Yesterday, and It Was Everything

Former Vice President Joe Biden made an unannounced visit to St. Louis yesterday — and had pretty much the entire city swooning.

Biden was here with his wife, Jill, whose visit had previously been announced as part of Walk of America, a 1,000-mile cross-country journey raising money for wounded veterans.

Uncle Joe's participation seems to have come as a surprise. But, boy, did he make the most of it. Along with several grandkids, the former veep popped up at the Arch, the heart of downtown and the Central West End, leaving a trail of excited citizens in his wake.

First, the point of the visit — raising money and awareness for veterans:

We’re in St. Louis with @DrBiden and @JoeBiden for day 54 of the #WalkOfAmerica. Honored to join the @supportthewalk team once more. pic.twitter.com/6E2P6jCB8o


Photographer Ed Aller (of Allernothing.com) was at the Arch for the event. He remarked on Biden's realness in a public Facebook post: "I heard Joe Biden say to a wounded Veteran 'Aw hell man, I'd love to give ya a push if that's okay.' You can tell by this man's expression that this was a very special moment for him and it's moments like this that I'm honored to be a part of while 'working.'"

After the ceremony wrapped, the Bidens made time to visit friends old and new — and do a little shopping.

Restaurateur Chris Sommers — whose Pi Pizzeria was famously cited by President Barack Obama as his favorite — had previously met (and fed) Biden at his June event at the Peabody Opera House. He says he got a last-minute invite to join the Bidens, two grandchildren, some staffers and Kevin F. O'Malley, who was Obama's ambassador to Ireland and is a partner at Greensfelder's St. Louis office, for lunch at his own Pi Pizzeria at the MX Building. 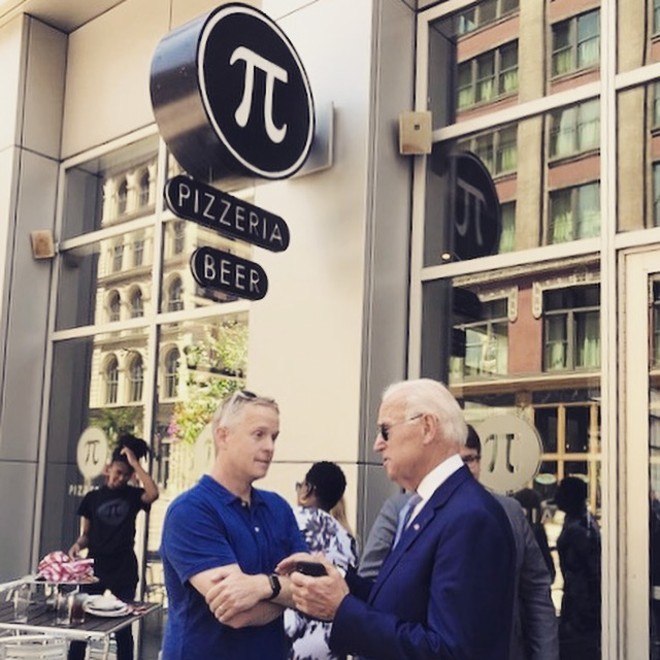 Sommers reports the other diners were pretty chill: "He walked in with sunglasses so likely many missed him. A few got photos outside afterwards, though." (Coincidentally, Sommers says, ArchCity Defenders was treating its interns to a farewell lunch at Pi, so they got to meet the Bidens — pretty neat perk for spending your summer at a public interest law firm!) The Biden group feasted on a Southside deep-dish pizza, a Lincoln Park thin crust, the Bada Bing and Caesar salads and even an apple pi.

Somehow, after that, the Bidens still had room for dessert. They popped up later that afternoon at Jeni's Splendid Ice Creams in the Central West End.

Kris Kleindienst, co-owner of neighboring Left Bank Books, says she heard Joe Biden was at Jeni's. "And, because I'm twelve, I jumped up and ran outside with one of our sales reps, and they were there," she says, laughing. Once at Jeni's, it was basically just them, the Secret Service and the Biden family. "We bought ice cream, basically because we didn't know what else to do." Eventually, they got up the guts to say hello and thank the former vice president for his service and then left.

But she needn't have been so shy, because as it turns out, Jill Biden was shopping at Kleindienst's own bookstore. Dr. Biden bought an Ann Patchett novel, Kleindienst reports, and made a donation to the store's River City Readers program, which helps provide books to students within the St. Louis Public Schools.

And while she was wrapping things up, who should end up browsing the shop's windows but Joe Biden himself?

The former vice president ended up buying Prisoners of Geography: Ten Maps That Explain Everything About the World. And at that point, a staffer asked Kleindienst if she'd gotten her picture taken with Biden yet. Admitting she'd felt too sheepish to ask at Jeni's, she gladly accepted the offer in front of her shop.

"It's been a fun afternoon," she admits.

After that, the Biden trail goes cold, but who knows? Did Uncle Joe end up at the racetrack betting on the horses? Singing karaoke at Talayna's? Perhaps even sitting on Mark Dew's piano at the Hideaway a la Lauren Bacall and Harry S Truman? Who knows? He's a friendly guy, and we may be hearing about Biden sightings for days to come.

Incidentally, Biden's visit to St. Louis came at the same time as a major story out of D.C. suggesting he's the guy President Trump fears most in 2020 — and that Pennsylvania is the state he's most anxious will flip. Judging by the outsized reaction his interactions drew in St. Louis, could it be Trump should also be sweating Missouri?