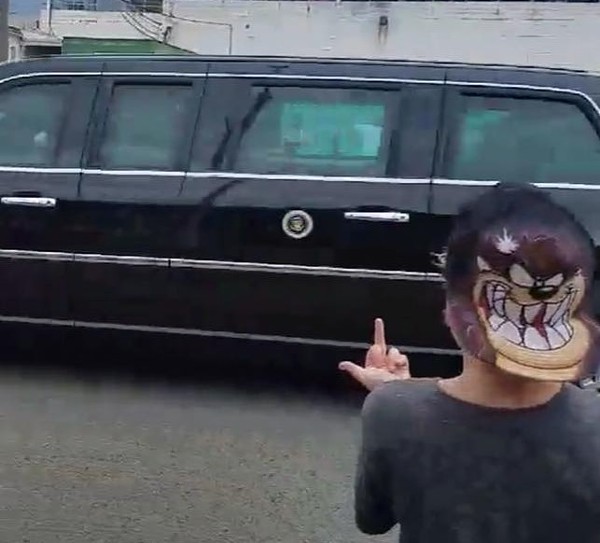 President of the United States and loud-talking nonsense factory Donald Trump came to Granite City today to bloviate about how smart he is at trade wars, and one wise kid armed with nothing more than a Tasmanian Devil hat and his extended middle finger was having none of it.

The young man was first fully appreciated by KDHX DJ and avowed Trump detractor Chris Ward, who spotted the kid in a video and shared these pictures on Facebook:

The video the images came from was shot by Lilith Ashline, who was outside the steel plant where Trump spoke, joining a crowd of both protesters and supporters of the president. In Ashline's footage, the young Taz-loving rapscallion, who is all of us, can be seen flipping the double bird as the presidential motorcade rolls by.

Now, before you accuse the RFT of "bias journalism," let us go ahead and say: Yes, we are biased against Donald Trump. We made that crystal clear before he was even elected. Relax.

And so we reached out to the lil scamp's dad, who gave us permission to publish the video and photo. Dad, also not a Trump fan, seems proud of his son.

"I want to get a big picture of this framed," he says.

Watch the video of this fine young man in a Taz hat flipping off the president below, and weep not for the future, for the future is bright: