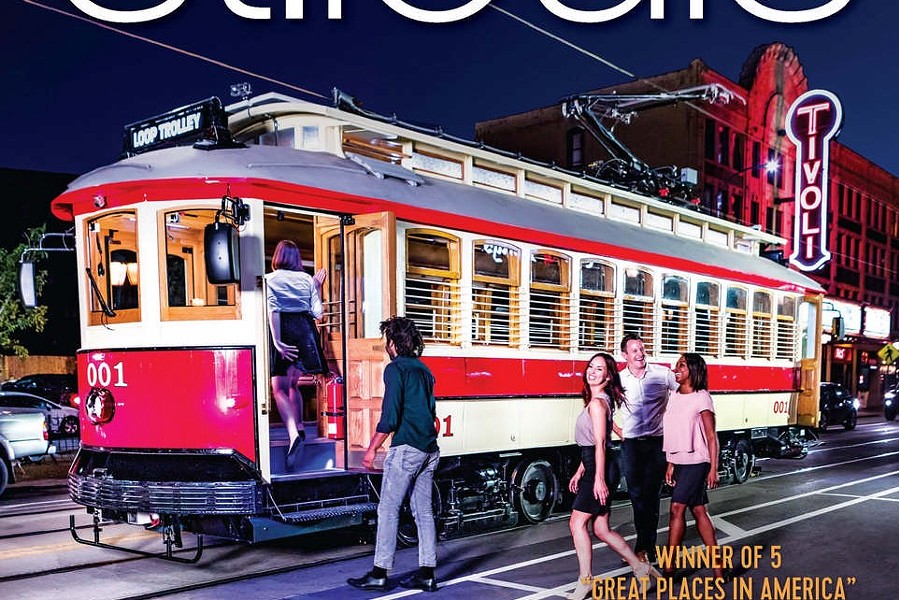 There is a philosophical theory that all of existence, every blade of grass, every beat of a butterfly's wings, is actually a computer simulation of unfathomable size — and it follows that if such a thing is possible, it is likely that this world is but one of many simulated versions of reality.

That is to say: While we very well may be living out our dramas and desperations within this universe, it's feasible that right now in some other unfathomably powerful computer simulation, the Loop Trolley is operating.

Obviously, that world is not this one, where the trolley has been missing expected start-date targets since 2016. But that world does live, frozen and perfect, on the cover of St. Louis' official 2018 Visitor's Guide.

The 2018 edition of the guide was released in January. Not being visitors and all, we didn't see it until a weekend Reddit post highlighted the somewhat unfortunate cover image.

The sight shook us.

For us, the trolley-less humans of our present universe, the magazine cover is is a marvel to behold: The universe of the 2018 St. Louis Visitor's Guide is a blindingly well-lit one, filled with attractive laughing passengers, secure in the knowledge that they are about to enjoy a safe and nostalgic ride toward Forest Park or the Missouri History Museum. One wonders: What are they doing out on this night? What bars have they hopped? What sights have they seen? Why is the trolley halted in the middle of the street, and not at one of its designated stops? These answers, like the trolley itself, are trapped within the page, beyond our grasp.

The trolley reappears inside the issue as well, featured in a blurb alongside fully operational attractions like the Saint Louis Science Center and Six Flags.

"Track down fun aboard the new Loop Trolley," the blurb reads. "Traveling a 2.2-mile fixed route between the Loop and Forest Park, vintage-style cars glide along the Loop neighborhood's Delmar Boulevard ..."

The present-tense of the blub is, well, surreal. Today, there is nothing to "track down," no vintage-style cars. It's describing a fantasy that, in our world, exists in the pantheon of myth alongside the likes of Zeus and the Loch Ness Monster.

Reached yesterday by email, Anthony Paraino, director of communications for Explore St. Louis, explained that the 2018 issue isn't just a reflection of an alternate universe, but a bit of time travel as well.

"The inclusion of the Loop Trolley on our 2018 Visitors Guide was made in the fall of 2017, as production of this publication takes place months in advance," he writes. "At the time of the publication’s printing, the Loop Trolley was expected to be operating in the first quarter of 2018."

Indeed, at the time, the Trolley was in the midst of testing, and trolley booster Joe Edwards was talking about a possible roll-out of service in January 2018.

But January arrived, the 2018 issue of the visitor's guide hit the stands, and the months passed. And passed. Safety testing appears to be at issue, and the project's backers are now aiming at August or September for commencement of service. And so the delays roll on, buffeted by a current of mockery and frustration, borne ceaselessly into the future.

The good people behind the Official 2018 St. Louis Visitor's Guide are in the same boat.

"Like everyone in the community," Paraino writes, "we eagerly await the full operation of the new system as it will be an asset to the many visitors who enjoy the attractions in the Loop and Forest Park."

If there's any consolation here, we should note that physicists experimenting with computer simulations recently found evidence that certain quantum effects are so complex that it would be literally impossible to build a computer with enough memory to store the necessary information.

Where does that leave us? We must accept that this is our only world, and that the only working Loop Trolley in existence is not in some vast, extra-dimensional hard drive, but right here, on the pages of a magazine designed by people whose only mistake was believing, like the rest of us, that the trolley is more than a theory.