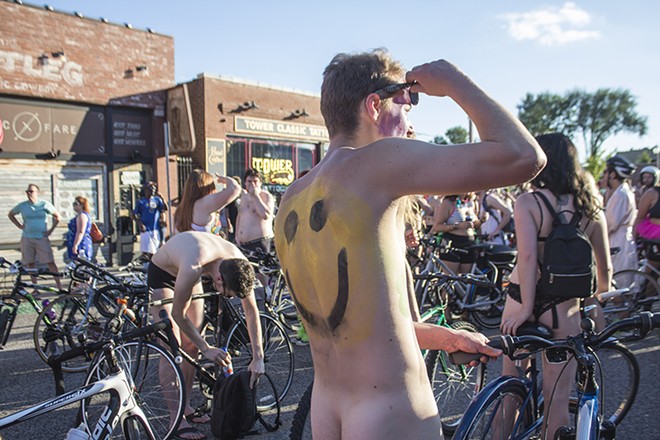 Apparently unaware that the St. Louis Police have bigger things to do than monitor nudity, a tourist here called 911 Saturday, demanding that they take action against the World Naked Bike Ride.

The man said he was leaving dinner at Square One Brewery in Lafayette Square when he was confronted by hordes of undressed (and underdressed) cyclists. When the family subsequently made a wrong turn, they were confronted with the whole spectacle all over again.


"To our dismay, we soon found ourselves stopped at an intersection as the entire parade of nude adults pedaled past our car," writes John Ellis. "Our two children, both minors, were exposed to adults gleefully exposing their penises and vaginas."

Now in a passionate essay for the conservative site PJ Media, the man alleges that his children have been violated — and urges moralists to avoid the city.

"Tonight, my kids were exposed to the genitalia of adults by permission of the city of St. Louis and under the protection of the St. Louis Police Department," Ellis concludes. "If you want to protect children, then vote in a way that makes sure that the 'Blue Wave' doesn't happen. Also, if you want to protect your children from government-sanctioned molestation, then you should avoid the city of St. Louis."

Ellis, who stopped through town overnight as part of a family road trip, seems to have suffered from inexplicably bad luck in avoiding the pedaling party. A person could have spent the entire day Saturday driving around the city and not encountered a single nudist. Somehow, the Ellis family not only ended up at dinner right along the only true loop in the 14-mile bike route — but also must have booked an Airbnb in the Grove, where the after-party runs following the event.

Ellis says he called 911 at that point because he literally felt "trapped."

"I can hear their profane shouts as they express their lustful glee," he writes. "It is everything that I can do to keep from going outside and confronting them. I feel violated and I am angry. It is not okay that a group of adults can openly flaunt their nudity and imprison my family inside." [emphasis added]

A dispatcher — undoubtedly wondering why the heck a moralist would book his family an Airbnb in the middle of the city's party-hearty "gayborhood" — apparently told Ellis police would "check on it" .... because, yeah, this is St. Louis and we have actual crime here.

But here's the real shocker for anyone who's ever tried to get the St. Louis Police to pay attention to anything in their neighborhood:

At some point, the police called this crank back.


He then asked me if I had any of the names of the individuals who had exposed their genitalia to my kids. Of course, I was unable to provide him with any names. When I asked him if as a police officer he would encourage a private citizen (me) to confront the riders in order to get their names, he responded in the negative. According to the St. Louis Police Department, it would've been unwise for me to have attempted to get the names of those guilty of indecent exposure. However, he added, "If you had called during the middle of it..."

I interrupted him and said, "I did call during the middle of it."

At that point, he pleaded off by claiming that he couldn't do anything about it.


In summary: Man visits city, complains about its participation in world-wide event, wastes police resources, is still treated kindly by law enforcement. Were we Ellis' editor, we might have been tempted to title this essay "Nudity Frightens the Children, But Somehow Mine Survived Their Trip to St. Louis." Or even, "The St. Louis Police Are a Bunch of Softies — on Both Nudists and Cranks Like Me."

In fairness to PJ Media, however, those options fail to capture the high-impact pearl-clutching of "World Naked Bike Riders in St. Louis Exposed Penises and Vaginas, Sexually Molesting My Kids." But who are we to critique? We're St. Louisans who've been living our own private Blue Wave for decades. Clearly, we're a bunch of degenerates.