The Midwest is Getting Stuck With Donald Trump All Week 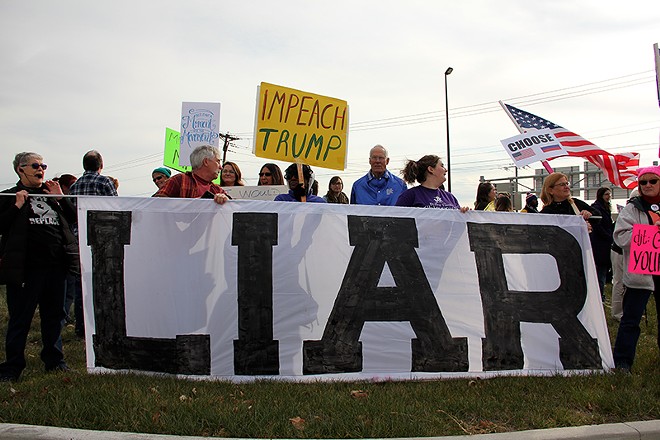 After spending this morning rattling his presidential saber at Iran, Donald Trump has revealed his full travel schedule for this week — and it includes two stops within our humble Midwestern footprint.

First, Trump is scheduled to appear in Kansas City tomorrow, where he's planning to attend the annual convention of the Veterans of Foreign Wars. Trump will also be making a stop at a campaign fundraiser for exceptionally-buff Republican Josh Hawley's ongoing attempt to unseat incumbent U.S. Senator Claire McCaskill (D-Missouri).

Tuesday's stop in KC will be Trump's second time hosting a high-priced fundraiser for Hawley — however, on this visit, the event will be at something of a discount. Back in March, some attendees paid as much as $50,000 for the chance to listen to Trump talk about how he loves making shit up ont he fly to foreign leaders. In contrast, the Kansas City fundraiser tops out at a paltry $25,000 for a pair of tickets, a definite bargain for deep-pocketed individuals who want the front-seat view of a guy who tweets all-caps military threats before breakfast.

After the KC fundraiser, Trump is reportedly planning a quick jaunt to bustling Dubuque, Iowa, before flying to the metro St. Louis area Thursday for a speech at a steel-producing factory in Granite City, Illinois.

The factory, the Granite City Works, recently reactivated one of its two dormant blast furnaces and steel-making facilities — and, says Trump, it's all thanks to the president's decision to impose stiff tariffs on foreign manufacturing. In the past, he's talked up the new jobs created in the Metro East as proof that his tariff plan is working.

And indeed, hundreds of jobs in the area have returned as a result. But like pretty much every chapter of Trump's past business ventures, the upside hides an iceberg-sized bummer. In this case, the bummer is reserved for American employers who rely on steel to make their products.

On Sunday, Mid Continent Nail general manager Chris Pratt told NPR that Trump's tariffs have upset the market for steel, hurting his own company and creating a spike in the cost for domestically produced steel.

His company is now struggling to adjust. According to NPR, Mid Continent Nail produces half the nails made in the entire United States. Although the company has tried to pass on the newly increased cost to its customers, Pratt said that measure didn't work. The tariff only applies to manufacturing materials, not finished goods, so those customers simply turned around and bought imported finished nails at a price Mid Continent Nail can't match.

"[O]ur customers, in the two-week period, canceled 50 percent of their orders for June because they could buy import nails that are not subject to the 232 tariff," Pratt said. He explained that turning to domestic sources of steel didn't help either. The law of supply and demand has kicked in — Pratt claims that American steelmakers have raised their own prices 30 percent.

"I think this is a misguided policy," Pratt added later in the NPR interview. "It was not thought out well."

Jeez, who knew the economy could be, like, so complicated and stuff?