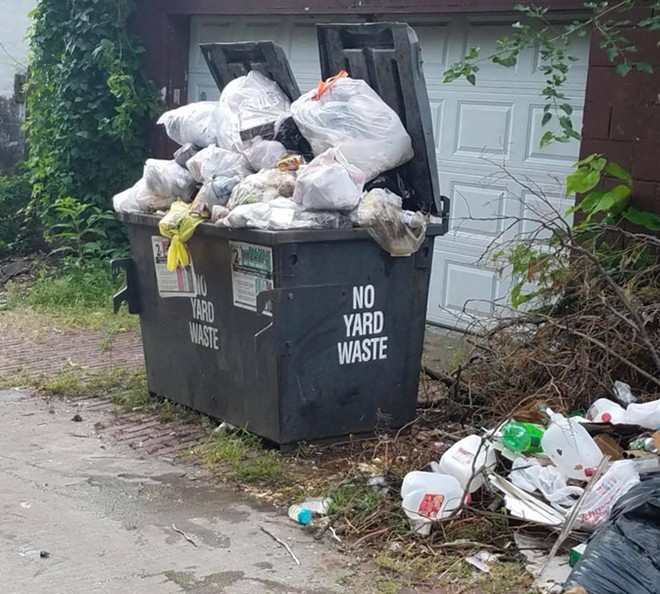 Anyone who has peered down any given alley in the city and spied the rolling tides of overflowing refuse therein already knows that, but what you may not have known is the face-palmingly simple reason why: We don't have enough trash trucks to cover our routes.

According to a report by the Post-Dispatch, St. Louis has 55 trash routes to run each day, but only has 40 to 45 working trucks in service most days. It doesn't take a rocket mathecist to figure out that ain't gonna work.

Some would say that the mountains of garage strewn everywhere are just part of the city's appeal, and that drowning in one's own refuse is St. Louis as hell, and that why would we want to do anything about our city's charming lack-of-trucks-lots-of-trash quirk anyway? Just kidding, no one would ever say any of that. This one is so basic it seems unbelievable that it requires discussion.

“When you don’t have enough trucks, you don’t have the ability to cover all those routes,” Streets Director Jamie Wilson tells the Post-Dispatch succinctly. Yep, makes sense.

Some of the trucks in the city's current fleet are eighteen years old, with ten years being the average, the paper reports. The very nature of their job involves a lot of wear, what with schlepping literal tons of garbage all over town and all.

“There are 140,000 tons of solid waste collected per year, and the wear and tear on the hydraulics of the trucks is inherent with the job they are doing," Wilson tells the daily. "These are $250,000 vehicles. It’s a large amount of money for a big job.”

The Board of Aldermen voted to increase trash fees a year ago from $11 to $14 a month. That will bring in some $3.5 million more per year for service, with half that money intended to go to buying new trucks. That money resulted in the city getting thirteen new trucks last fiscal year, with a plan to acquire 76 in total over ten years.

But so far it's just not enough. Even Mayor Lyda Krewson admits as much, telling the Post-Dispatch in April, "The city is not as clean as it could be." (Mayoral understatement alert!)

According to 20th Ward Alderwoman Cara Spencer, the issue falls squarely on the shoulders of the mayor — although she's careful to acknowledge that it's not the current mayor who got us into this jam. She says the inadequate trash service had been a failure on the part of the past administration for years, but that Krewson inherited a mess that only her office can fix.

"We found $106 MILLION in the general budget 2 years ago for the Scottrade Center, but we didn't find a single dime to replace garbage trucks or lawn mowers which were all past their average lifespan nationwide," Spencer writes in a Facebook post. "Moving forward, the City needs to focus on providing basic city services — reliably — in every department.

Maybe those trash trucks should try skipping service at that office for a few weeks. If a mountain of garbage large enough to block out the sun at City Hall isn't enough to correct the issue, at least it will be appropriately representative of the city.