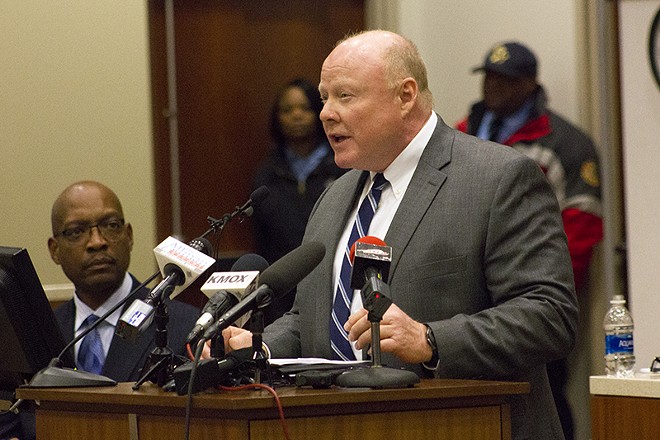 St. Louis Police Lt. Colonel Lawrence O'Toole, who famously bungled his department's response to protests last fall as its interim chief, is pissed that he didn't get chosen to lead it permanently.

And get this: He's blaming the fact he's white.

As KMOV first reported earlier today, O'Toole has filed a complaint with the Missouri Commission on Human Rights, alleging discrimination based on race/color and retaliation.

Koran Addo, a spokesman for Mayor Lyda Krewson, confirmed the complaint, saying the city will be reviewing it and will be answering within 30 days, as the process requires.

Complaints with the commission are generally the first step to filing a lawsuit alleging discrimination. KMOV reported that O'Toole has also filed a complaint with the Equal Employment Opportunity Commission, but Addo was not able to immediately confirm that.

Police Chief John Hayden, who is black, was tapped by the city after a lengthy process that included a national search, at least a dozen meetings by a citizen advisory committee, a test and extensive interviews. The six finalists were chosen in part through their test scores, but ultimately Public Safety Director Jimmie Edwards, who answers directly to Krewson, made the final selection.

O'Toole famously announced escalated tensions between the community and the police department, boasting "the police owned the night" after an evening that saw journalists and other observers swept up in a kettle and, some alleged, brutally beaten. (A total of 123 people were arrested on a night that police were heard chanting "Whose streets? Our streets.") "Fire O'Toole" became a popular chant at subsequent protests (and just about everywhere Mayor Krewson attempted to speak to the general public last fall).

At a public forum with the finalists, in fact, O'Toole's very presence was so divisive that audience members responded with singing and chants every time he tried to answer a question. O'Toole, who seemed to be reading from a prepared speech, struggled to be heard.

"The only candidate that is not being allowed to speak is the candidate that we the people asked for the city to terminate," activist Elizabeth Vega announced during one of the disruptions. "We will stop trolling the chief," she continued, to loud applause, "when he does the right thing and excuses himself as a candidate of this process."

But, sure, Larry: It wasn't your radioactive reputation that torpedoed your candidacy. It had to be the fact you're an old white guy and maybe someone was retaliating against you.

If you believe that, we've got a trolley project to sell you.