A St. Louis Trucker Is on a Mission to Trap Pedophiles. He's Already Bagged 6 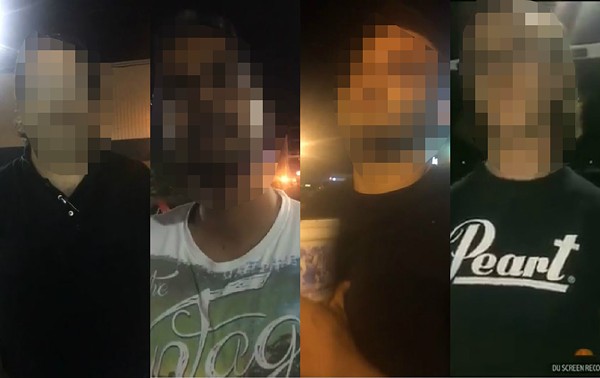 It was past 2:30 a.m. Saturday, and from behind the camera of his smartphone, professional trucker and newbie pedophile hunter Anthony Greene observes his target pull up in a white pickup truck. He follows the truck to a BP gas station parking lot in north St. Louis.

The trap has been laid, and now Greene is ready to spring it shut.

"There he is," he says into the camera, which is streaming the footage to Facebook and thousands of viewers. "He's a sick-looking fuck."

A St. Louis native and founder of Truckers Against Predators, Greene performed five prior stings between launching the group July 7 and that morning's livestream. It was third to take place in St. Louis. The sting locations have followed Greene's trucking routes, resulting in recorded operations in Texas, New Mexico, Nevada and Missouri.

In the span of little more than a week, Greene has confronted multiple targets in parking lots, berating and shaming them in front of a growing online audience. In one case, in Texas, the target left the scene in police handcuffs.

Each time, Greene tells the men they are being filmed "for your safety and mine." In some cases, his videos show these men admitting what they'd done. Others deny and deflect, or cry, begging Greene to give them another chance.

In the footage from Saturday, Greene flips the camera view to the front-facing mode, which reveals the target of the sting: a clean-shaven, middle-aged man with a distinctively curled black mustache. (Since he has not been charged with a crime, RFT is not naming him.)

"You and me need to talk," Greene tells him. "You know, the things you were worried about when you talking to the decoy..."

"Goddamit," the man says in a deflated voice.

It's an exchange that should be familiar to anyone who's seen To Catch a Predator — especially that iconic TV moment when host Chris Hansen emerges from a side room, and the cameras zoom in on the suddenly sweat-slicked face of a man realizing he's walked into a trap, as Hansen drops the now-infamous line, "Why don't you take a seat right over there."

Greene doesn't use the line, and he's certainly no ultra-composed, TV-ready reporter like Hansen. On the Facebook video from Saturday, Greene opens by telling the man that he's not a cop, but then adds, "I work with police."

Then Greene really lays into him:

"The fuck are you thinking man? Did you read the things you were saying to this girl? We could totally take everything to your boss and everything else. I'm interested in why in the hell you're trying to ruin a little girl's life that's a virgin."

The man with the mustache just stands there, taking Greene's verbal barrage. He drops his head to his chest, repeating, "I don't know man, I don't know."

Reached by phone a few days after the sting, Greene explains that he's a longtime fan of citizen-led efforts to identify and publicly shame child predators, especially a group called The Ultimate Decoy. Dozens of other groups are active across the U.S. and overseas, with the hunters generally uploading videos of confrontations with men — and it's always men — who are lured into the trap by decoys acting as minors.

"I just feel like there's a movement, there's at least twenty different hunter teams in the country," he says. "We just based ours around trucking because that’s what I do."

Indeed, Greene follows a long line of similar efforts. The most prominent, NBC's To Catch a Predator, had just a two-year run from 2006 to 2008 before being canceled in the wake of a target, a prosecutor, committing suicide. The Internet group NBC worked with, Perverted Justice, had a track record predating the show, and boasted more than 100 convictions.

But the show came under heavy criticism. Beyond the civil rights issues, an expert later told the New Republic, it was simply dangerous. “We see situations that in a second turn volatile,” James Drylie, a professor of criminal justice at Kean University, told the magazine. “Imagine hearing: ‘lights, camera, action, you’re on TV.’ A person can just explode — they’re looking to escape and they’ll use any means.”

That hasn't happened yet to Greene. (He says he carries a firearm for protection during the stings.) It also doesn't take a TV production to seek out targets. It's depressingly easy.

Here's how Greene sets up a sting: First, decoys identifying themselves as adult women will post on various social media and messaging apps — apps like MeetMe, Whispr, Musicly.ly, MeetMe, LiveMe and Plenty of Fish, he alleges, are "terrible safe havens for pedophiles." These initial posts aren't explicitly geared towards predators, but rather offer an innocuous invitation, something like a 26-year-old woman in town for a night and looking to hang out.

"Within ten minute we'll get 80 to 100 responses," Greene says. After two or three messages, however, the decoy "reveals" that she's not 26, but fourteen. At that point, about 50 percent of the respondents stop communicating, Greene says.

Overall, Greene claims that his decoys are currently working 100 concurrent conversations, all with men who appear interested in meeting up with girls only a few years older than Greene's own twelve-year-old daughter.

After the initial contact, the decoys arrange a meeting — always a public place, preferably late at night or early in the morning, to reduce the possibility of bystanders interfering, Greene says.

He adds, "It’s definitely dangerous." Greene claims that he consulted St. Louis police officers before launching Truckers Against Predators earlier this month. An officer told him not to get involved, he says, for the sake of his own safety.

But Greene says the risk is worth it. The trucker says he himself was sexually abused as a child, and he believes that citizen-led hunter groups are doing vital work, raising awareness that predators exist online and in real life, in great numbers, and that they're constantly looking for victims.

"These people are your neighbors," Greene says. "Whenever I meet one of these guys, I feel like I've actually saved a child that night. And instead of them meeting up with a little kid, they meet up with a 350-pound man."

For Greene, perhaps the hardest part of the job is keeping his cool when getting face-to-face with the sort of person who would drive to a gas station at 2:30 a.m. with condoms and the intention of taking a fourteen-year-old girl's virginity.

On Saturday night, Greene admits, he lost his composure. On the video — which, as of this writing, has nearly 40,000 views — he spends more than ten minutes castigating his target, telling him that he'll likely be raped in prison and that maybe he should just jump off a bridge.

At one point, Greene threatens to call the cops to the gas station if the man keeps evading his questions. Later, Greene appears to yell toward some bystanders, informing them that the man had tried to have sex with a fourteen-year-old. Off-camera, someone shouts back, "Knock his ass out!" and "You should be killed motherfucker!" and "Cut his balls off!"

"Do you know how bad I want to turn this camera off right now," Greene asks the man. "There's no curing people like you. None. No fucking cure."

During his later interview, Greene tells RFT that he regrets involving the bystanders and that he won't do it again — not out of sympathy for the target of the sting, but because one of those bystanders could have taken matters into their own hands. That wouldn't be good for Greene.

"If someone would have hurt him, I would have been held responsible," Greene says. Still, he understands the impulse to hurt predators. Considering his own experience as a sex-abuse victim, he says that if he was in the bystander's position, "I might take a swing at him. I might."

Greene maintains that he's not a vigilante, and that he's not out to bring violent retribution on the predators he hunts. He wants arrests. However, to date, only one man — a target in Texas — has left the scene of a sting in police custody.

"We have nothing further at this time as the investigation is ongoing," she writes.

It's not clear whether Greene's sting operations will lead to charges in Missouri. The state statute defining the crime of Enticement of a Child seems expressly written to exclude non-police sting operations. The statute includes a provision that reads, "It is not a defense to a prosecution for a violation of this section that the other person was a peace officer masquerading as a minor." So what if the other person isn't a police officer at all? Is that a defense? Would the evidence gathered prior to the live-streamed confrontation give police legal cover to arrest the perp, or, for that matter, for a prosecutor to issue charges?

Greene thinks it should.

Yet even in the absence of prosecution, Greene is making an impact. According to people posting on the Saturday video, the mustachioed man is an employee of several local bars, most recently Hendrick's BBQ in St. Charles. A manager there Monday hangs up on a reporter when asked about the man by name. Hendrick's told a concerned citizen who reached out via private message that the man was no longer an employee.

For Greene, the social result — the public awareness — makes his own efforts worthwhile, even the guy doesn't end up behind bars.

"I feel like internet justice is sometimes is better than criminal justice," he says. "These men are not innocent; they are attempting to meet a child for sexual activity. I'm not a vigilante, and jail is really what I want, but I definitely think there’s a big value of the internet exposures. Maybe more so than jail."