A Plane and Car Collided on I-55, But Somehow Everyone Was OK 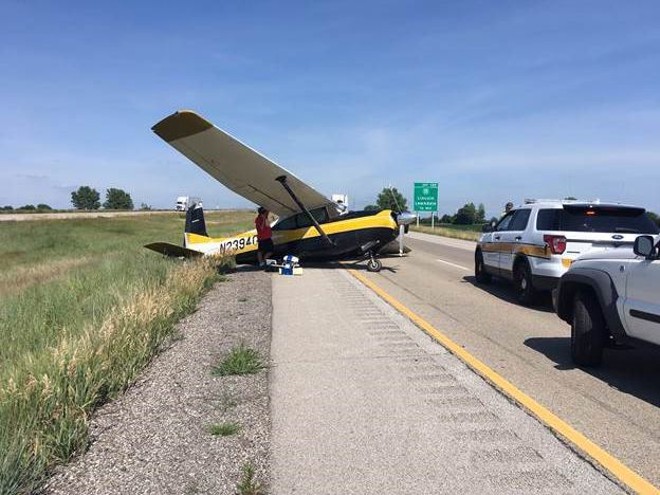 As if other drivers on Interstate 55 weren't enough of a concern, now we have to worry about dodging pilots, too.

A small plane making an emergency landing Wednesday afternoon clipped a car being driven by an O'Fallon, Illinois, man, smashing out the back window before skidding to a stop on the edge of the highway, according to reports.

Miraculously, no one was hurt. The shaken driver spoke to radio news veteran Shawn Balint shortly after the surprising collision.

"He was flying low over the northbound lanes, really low," the driver, Jeremy Kampwerth, said in a video posted to Balint's Facebook page. "My initial thought, my quick thought, was that he was trying to land the plane."

Kampwerth and his nine-year-old son were on the home stretch of road trip to Chicago to see the Cardinals play. After a quick stop to see family, they were driving through Logan County in central Illinois when the small Cessna came into view.

Kampwerth said he saw the plane turn and thought maybe it was just a low-flying crop duster swinging back into its route.

"The next thing I know is he hit me," Kampwerth says.

The impact shattered his back window as the plane careened past, sliding through the median before coming to a stop on the shoulder. Kampwerth immediately checked on his son, who wasn't injured. He then ran up to check on the pilot, who was also OK.

The crash temporarily shut down the interstate.

The pilot, identified as William Farnsely, 51, of Austin, Indiana, was apparently trying to land at nearby Logan County Airport when he lost power, The Pantagraph newspaper reported.

The crash was still under investigation, and the Federal Aviation Administration announced Wednesday that it was sending investigators to the scene.