If you're one of those folks who gets full-body shivers when they see a beautiful car smashed or burnt to cinders, then we're sorry: This story is going to suck.

That's because, on Saturday evening, a blue Lamborghini — specifically, a Huracan Performante — was transformed into a charred remnant of an automobile, and all because of arguably the dumbest thing that's ever happened in a gas station.

According to bystander Parker Gelber, the gorgeous, $275,000+ performance vehicle was taken from this world after a minivan, which had been fueling at an adjacent pump, drove off with the nozzle still connected.

"The pump sprayed fuel directly into the blue Huracan’s engine bay and it instantly ignited," Gelber wrote in a Facebook post Sunday. Thankfully, nobody was injured in the resulting inferno. But oh, the insanity!

Gelber, a car salesman at Exotic Motors Midwest, says that he and a friend had been out cruising the streets in their Italian supercars when they stopped for gas at the Mobil station on Manchester in Kirkwood. Gelber was driving the red Lambo in the photos above and below; his friend, who's also local, was driving the blue one.

In his Facebook post, Gelber included a video shot by another bystander, Paul Hayo, which shows the moment the minivan pulled away from the pump, drenching the immediate area in gas. Hayo's video cuts out after ten seconds, right before, presumably, everything went to hell.

Gelber later uploaded an additional video shot by Hayo to Instagram, showing the gas station wreathed in smoke from the burning supercar.

Yes, that was myself and my friend with the two Lamborghinis at the gas station last night. We were out driving for a bit and I needed to go get gas. The blue Lamborghini pulled up right behind me. He decided to go in to get us waters and while I was trying to pay for my gas at the pump there was a card error, so I also went inside. As soon as we walked in, we saw a massive fireball out the window. We all ran out of the gas station to the other side of the road. At this point, we had no idea what happened or who’s car(s) were on fire. We dialed 911 and when the fire was out you could see that his car was completely burned down, ours just covered in ash. While talking to police and firefighters a man ran up and said he saw what happened. He was recording the cars to show his friends and caught a guy driving off with a gas pump still in his car. The pump sprayed fuel directly into the Huracan’s engine bay and it instantly ignited. Police found the guy that did it and everything will be taken care of. Just thankful we all got away safe and it didn’t escalate into a bigger fire. Video of the van - swipe left


"What the fuck," Hayo can be heard saying, quite reasonably, as he filmed the luxury auto's unintended Viking funeral.

In an interview with RFT, Gelber notes that he came terrifyingly close to losing his life in the fire. He may have been saved by a credit card failure.

"I would have been outside pumping gas right next to it, but I guess my card got declined and I had to go in," he says. "As soon as I walked in, I look out the window and there was a massive fireball. So I was safe from the fire by about five seconds."

The driver of the blue Lambo, as well as a third friend, had also gone inside the gas station just before the minivan driver prematurely pulled away.

"In the end, it's just a car," Gelber says. "The scariest thing was that if our friend was sitting in the passenger seat; there was no way he would have gotten out. Thank God he wasn't sitting in the car."

Gelber says the police later located the driver of the minivan, but he doesn't know if an arrest was made.

"I don't know if there was anything to arrest him for," he says, "other than that it was an accident."

And indeed, the unlucky minivan driver isn't facing a criminal investigation, says Kirkwood Police Department officer Gary Baldridge. "There was no criminal aspect involved in this," he says. "It was completely an accident."

After the fire was extinguished, the condition of the blue Lambo was not good. Photos posted by KMOV and Fox2 show the supercar burned down to its frame on one side. Gelber notes that a Lambo's distinctive rear-engine design features air vents intended to cool the engine. That was likely the culprit for the flash fire.

"All the gas sprayed into the air vents, and so you've got a bunch of holes into the engine," Gelber theorizes. "The gas just sprayed right on top of it and instantly ignited."

And that theory fits with what firefighters found, too. The Lambo's engine "became the perfect environment for that heat to cause an ignition," says David Smith, deputy chief of Kirkwood Fire Department.

But Smith also points out that that the fire wasn't fault of the automatic cutoff system installed on the gas pump. It's designed to close off the gas supply in just this situation. However, that system, which Smith says was activated the moment the hose detached from the pump, couldn't stop the gas already in the hose at the time of the minivan driver's blunder.

"[The gas] shut down as soon as the nozzle pulled away from where it hangs at the top of the pump. That plate automatically closes," Smith says. "The only gas that came out was the residual when the line flopped down." But that was enough.

Alas, poor blue Lambo. Taken before your time, in a flash of gasoline and stupidity. Let us all take a moment to remember this ludicrously expensive car, shown here in its better, less-on-fire days. 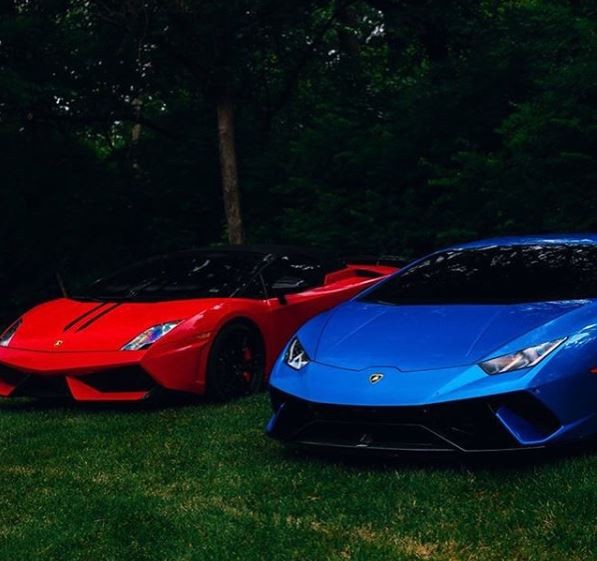 Editor's note: We updated this post a bit after 5 p.m. to include new information from the Kirkwood Fire Department on the cause of the blaze.