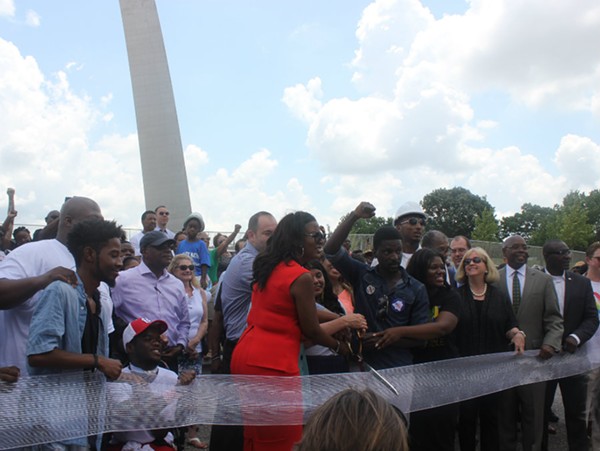 On Tuesday, a group of all-white city, state and federal officials gathered to cut the ribbon on the newly renovated grounds of the Gateway Arch.

Today, a much more diverse group showed up, aiming to turn what had been ridiculed as #ArchSoWhite into a more accurate picture of the area’s leadership. The hastily organized event’s emcee, the Reverend Darryl Gray, referred to the redo as the “first inclusive” Arch ribbon-cutting.

“If you look at the photos from last Tuesday, comparing it to the one in 1965, it doesn’t look any different. And in 2018, in 2018, that is unacceptable,” St. Louis Treasurer Tishaura Jones said. “The Arch is here for the region, for the people, for all of the people.”

“People thought today was about a photo, and it’s much bigger than a photo,” Franks said. “This speaks to a systemic issue that we’ve been dealing with for a long time in the city of St. Louis. So what we wanted to do is make sure people understand how diverse St. Louis is, how colorful St. Louis is, how alive St. Louis is.”

Organizers strove to include representatives of as many of St. Louis’ communities as possible. Alicia Hernandez, who is the office manager of Hispanic Chamber of Commerce of Metropolitan St. Louis, joined Vin Ko and Pradeep Rajendran, who are on the board of directors of the Asian American Chamber of Commerce, and the city police department’s first Muslim chaplain, Dzemal Bijedic, in making statements centered around themes of strength through difference, acceptance and inclusion.

Equally diverse as the set of speakers were the members of the large audience. (And yes, Mayor Krewson was there too.)

“So this right here is comfortable to me. This space is comfortable to me,” said Cori Bush, an activist and candidate for Congress. (Bush is challenging U.S. Rep. William Lacy Clay, D-St. Louis, who has acknowledged being invited to the original #ArchSoWhite ribbon-cutting, but said he had a pre-scheduled family vacation that day.) 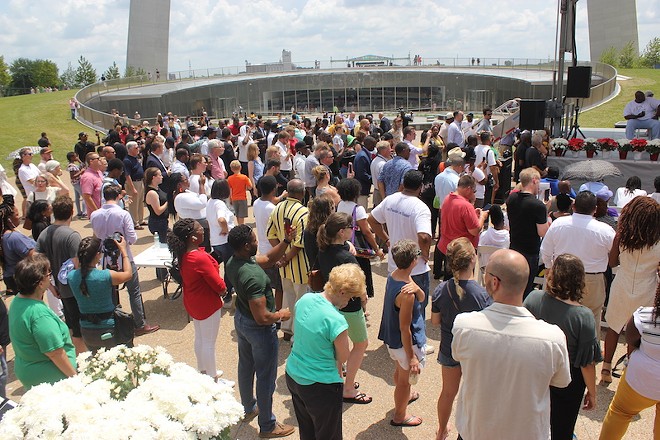 Speakers noted the Arch’s duality, as both one of St. Louis’ most iconic landmarks and a visual representation of the city’s fraught racial history. Several invoked Percy Green’s 1964 scaling the Arch to protest the lack of black workers involved in its construction, as well as slave sales that occurred near its grounds.

Partway through the ceremony, Jones introduced the Gateway Arch Park Foundation’s executive director, Eric Moraczewski, explaining that following the original ribbon-cutting ceremony, the two had a long conversation in which they agreed to “work together to make sure stuff like this never happens again.”

“For years, we focused on making this museum the story of everyone involved in our community. That’s why we are so sorry the ribbon cutting on Tuesday did not reflect this commitment,” Moraczewski said. “We missed the mark.”

Following the ceremony, a much larger and much more colorful group than the original bunch stood just in front of the Arch for a rectified photo. And following that, they all gathered for a spirited chanting of “I know that we will win.”