Macklind Avenue Deli Is Destroyed by Fire in Southampton 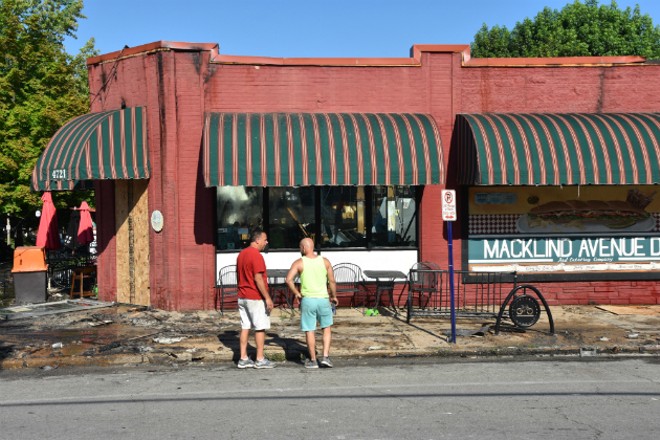 The flames torched the roof and ripped through the insides of the long, brick building at the corner of Macklind and Nottingham avenues. Employees learned about 1 a.m. about the fire and arrived to find the store in full blaze.

This morning, Crask peered in through the door at the charred interior, where locals often gathered for sandwiches or stopped by to pick up six packs from the store's wide selection of beers.

"Everybody in the neighborhood loved this place," Crask says.

Sixty St. Louis firefighters responded. They originally tried to battle the fire from the inside, but the powerful flames and falling debris soon pushed them outside to what officials described as a "defensive" position, pouring water on the blaze from above and the exterior.

They were able to keep the fire from spreading to nearby buildings, including the future home of Clementine's Naughty and Nice Creamery, whose third outpost is under construction next door. But the deli was destroyed. The brick shell is still standing, but where there was once a ceiling is open sky, interrupted by blacked metal beams.

"I think everything in it is a total loss," says Tony Zanti, who owns the building and another across Nottingham.

Casey Jovick, who is Zanti's tenant and general manager of the deli, stood across the street talking with people from the neighborhood, who passed through to offer well wishes. A friend had brought beers, and Jovick sipped a Zwickel. A certain gallows humor had set in as they watched construction workers board up the door.

"It sucks a big one," Jovick says, telling the RFT this will be his only statement for the day as his friends chuckle. "It sucks major donkey balls."

Two firefighters were injured during the fire. One, who was hit by debris, was taken to the hospital where he was to be treated for non-life-threatening injuries, a department spokesman said. The other firefighter suffered from heat exhaustion and decided not to go to the hospital.

The cause of the fire was not yet clear. There were reports of people shooting off fireworks nearby, but Zanti said he hadn't heard anything definitive. A neighboring house on Nottingham had some melted siding, but the damage appears to have otherwise been contained to the store.