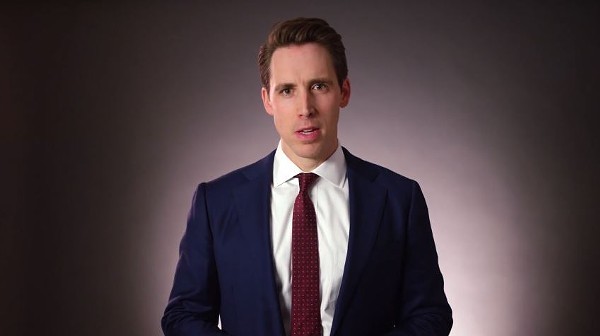 In June 2013, Josh Hawley, then a law professor at the University of Missouri, was flown to Phoenix to serve as a faculty member for the "Blackstone Legal Fellowship." The job was cushy — for what appears to have amounted to an hour-long address, Hawley was paid $2,500, given a flight and extra money for expenses, and put up in the Ritz-Carlton.

But the gig also came with some drawbacks — namely, "language guidelines" urged upon all faculty members. Those guidelines stipulated that Hawley shouldn't refer to hate crimes, but rather "so-called hate crimes." They said he shouldn't say "sexual education" but rather "sexual indoctrination," and not "gay," but rather "homosexual behavior."

The speech code was commemorated in writing.

"We are providing a confidential copy — not to be distributed or reproduced — to you because Alan Sears, our President, CEO, and General Counsel, is asking that where at all practicable, all persons serving as faculty conform their remarks, hand-out materials, and audio-visual materials to the Lexicon," the fellowship's organizers explained in an email.

The Blackstone Legal Fellowship is funded and organized by the Alliance Defending Freedom, or ADF, a Christian-based organization that has come under fire in recent years for its emphatic opposition to gay marriage and what its CEO has called "the homosexual agenda." The Southern Poverty Law Center has called it "an extremist group."

Hawley, who is now the state's attorney general and hoping to be its next Republican senator, replacing Senator Claire McCaskill (D-Missouri), has ties to the organization going back years. He and his wife, a fellow Mizzou law professor, have earned a collective $8,700 from ADF since 2013, according to his candidate disclosure forms and emails he received at Mizzou.

(So much for the confidentiality the fellowship sought to ensure; because the ADF emails were sent to Hawley's taxpayer-funded email address, they eventually turned up in a Sunshine request.)

Kelli Ford, a spokeswoman for Hawley's campaign, said the candidate had no regrets about his affiliation with ADF.

"The Alliance Defending Freedom is a Christian legal advocacy organization that has won nine cases at the Supreme Court in the last seven years," she said in a written statement. "Josh and Erin were invited to address Christian law students as part of their Blackstone Program. Josh and Erin aren’t going to apologize for their faith. They take their faith very seriously and it’s a privilege to speak with Christian law students."

Ford did not respond to two questions asking whether Hawley had objected to the lexicon. She also did not address whether he agreed that "hate crimes" should be characterized as "so-called hate crimes" or sex ed as "sexual indoctrination."

In its brief on the ADF, the Southern Poverty Law Center notes that the organization's global chapter has argued in favor of laws requiring mandatory sterilization for transgender people seeking to live as a gender other than that on their birth certificate. The executive director of that chapter also praised the 2013 court ruling in India that made homosexuality a crime, saying, "When given the same choice the Supreme Court of the United States had in Lawrence vs. Texas, the Indian Court did the right thing. India chose to protect society at large rather than give in to a vocal minority of homosexual advocates."

Hawley's spokeswoman, Ford, didn't refute those views, instead focusing on the messenger. "The Southern Poverty Law Center has become a liberal advocacy group that attacks anyone who disagrees with their left-wing ideology," she said. "They put Dr. Ben Carson on their 'extreme' list and have attacked nuns, veterans, Christians and anyone else who believes in the Bible and supports conservative values."

Hawley's address at the 2013 fellowship didn't focus on gay rights. The agenda shows he spoke about "Genius, Grace and Guts: The Constitution's Birth and Ratification."

Other speakers, however, put the issue front and center, including the ADF's senior counsel, who spoke on "Same Sex 'Marriage' and Its Relatives," while a senior pastor spoke on "Grappling with 'Gay Theology': What Would Jesus Say About Homosexuality?"

The lexicon, of course, had plenty to say about all that. Legal fellows were urged not to use the word "transgender." Instead, they were told, use "cross-dressing, sexually confused." Also, they were told, don't use "homosexual lifestyle."

"Note," the lexicon read. "Alan notes that it's not a lifestyle — tragically, it's a way that often leads to death (Proverbs 14:12)." The lexicon also notes, "Homosexuality is a personal struggle; however, homosexual behavior is sinful. Alan adds, "It isn't a condition."

The lexicon also instructed attendees not to use the terms "affair," "liaison," or "extramarital relationship" — instead, it said, call it "adultery." But the speech code wasn't entirely Old Testament verbiage. Another term Hawley and his fellow professors were instructed not to use? "Winter holiday/break."

Use instead, the lexicon instructed, "Christmas."