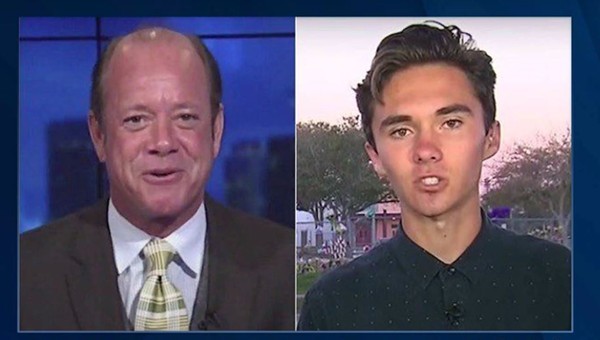 The St. Louis radio host who lost two talk-show gigs over an ill-advised tweet about gun-control activist David Hogg is now asking the federal government to intervene on his behalf.

Jamie Allman, who'd hosted The Allman Report on ABC affiliate KDNL (Channel 30) and Allman in the Morning on KFTK (97.1 FM), lost both jobs in April after he tweeted that he was "getting ready to ram a hot poker up David Hogg's ass" — a crass reference to the rectum of the seventeen-year-old school-shooting survivor.

In a lawsuit filed in late April, the mercurial host argued that his firing from the radio station was without cause, noting that his duties required him to be on Twitter and "maintain an active social media presence." He's also claimed the tweet did not represent a literal threat. And then, last month, he filed a petition seeking to get his former radio employers in trouble with the Federal Communications Commission.

In a petition filed May 30 — but not previously reported on — Allman is asking the FCC to reconsider its approval of the deal that allowed broadcast giant Entercom to acquire KFTK from Emmis Radio.

The eight-page complaint, filed by Clayton attorney Kevin Whiteley on Allman's behalf, is less about the merits of Allman's firing and more about the logistics of how and when it went down.

As the complaint details, Allman had worked for Emmis Radio since 2002. In August 2017, Emmis had renewed his contract, signing him to a deal that ran through July 2020.

But on February 22, Emmis entered into an "asset purchase agreement," effectively selling KFTK and four other stations to Entercom for $15 million. An application asking for the FCC's consent was filed March 2.

Several weeks later, Allman tweeted his controversial tweet. And several weeks after that, on April 6, the Riverfront Times reported on it — setting off a firestorm that quickly led to a national furor. On April 10, Entercom executives convened a conference call with Allman and fired him.

The problem, Allman argues, is that Entercom had no business doing the firing. The FCC didn't approve the transfer of assets until April 27. And until then, he argues, federal regulations require Emmis, not Entercom, to be in "control over station finances, personnel and programming."

He's now asking the FCC to reconsider its previous approval of the deal, saying Emmis wrongly allowed Entercom to take control early. And that, he argues, could — and should — have big consequences for KFTK.

"Willful violations of or willful failures to observe any rule or regulation of the commission authorize the revocation of any station license," his petition argues. More specifically, he's arguing that the FCC should revoke its consent to the sale and initiate an investigation.

Emmis and Entercom, however, say that's hogwash. The two radio companies filed a joint reply, saying Allman's claims lack standing, weren't filed on time, and "offer no substantive basis to reconsider the grant of the application."

They also call his petition "nonsensical."

"In short," they write, "the Petition is completely without merit and presumably has been filed in a misguided and uninformed attempt to create leverage for Allman in his employment lawsuit against Entercom and Emmis currently pending in court. The Commission should not allow its processes to be abused in such a manner."

On Allman's behalf, Whiteley declined to comment on the record.

Allman's lawsuit against Emmis and Entercom continues in the mean time. The radio companies successfully got it moved to federal court earlier this month.