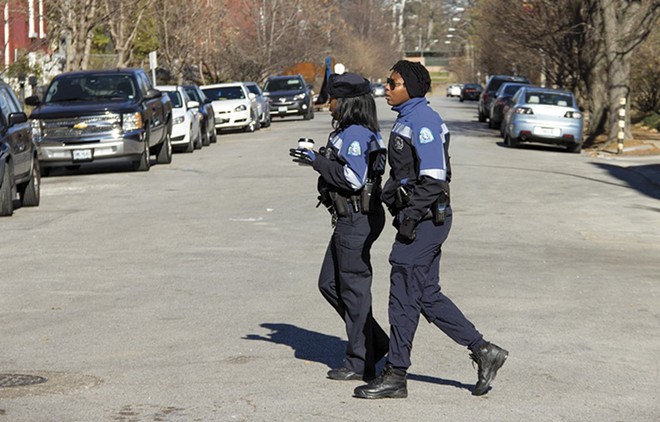 St. Louis' only dedicated foot patrol officers are sticking to Cherokee Street. That wasn't a given, considering the police force is stretched thin while dealing with another year of spiking violence, especially homicides.

The foot patrol officers, Devin Guajardo and Jazmon Garrett, were the subject of an RFT cover story in January, which explored the city's experiment in old-fashioned police beats. At the time, even the two cops acknowledged that their continued presence on Cherokee Street was far from a sure thing.

"We are aware that any day we could be removed from Cherokee. It's permanent, but it's not permanent," Garrett said at the time. "We could get a new captain tomorrow and we'll be back in the district."

Indeed, as Garrett suggested, the District 3 captain who assigned them to Cherokee, Shawn Dace, was recently reassigned to downtown. It was Dace was who first recognized the roles Guajardo and Garrett could play as foot patrol officers around Cherokee Street, a territory that features shops, restaurants and clubs surrounded by densely populated residential blocks. It's also an area that's dealt with a particular criminal dynamic, one that's included both occasional incidents of shocking violence and persistent issues arising from juveniles.

What began as an experiment in community policing has become a boon to the area, says 20th Ward Alderwoman Cara Spencer, who was among those who first lobbied Captain Dace to create a new foot patrol for the area in 2016.

"Businesses and residents who might not otherwise call the police call them, and that's a really good thing," Spencer says. "They play an important role; they know the kids in the neighborhood."

District 3's new captain, Ryan Cousins, announced during a May meeting of the Cherokee Street Business Association that the foot patrol would remain on Cherokee Street, though he suggested that the officers may be "periodically" moved to other districts. Granted, this wouldn't be a change of policy, as both officers had previously assisted in assault investigations in other parts of the city.

Cousins' appointment is also a significant move up after a rocky couple years. In May 2016, then-Police Chief Sam Dotson fired Cousins, who was commander of District 6 at the time, over allegations that he had ordered subordinates to alter police reports in order to protect a crime victim from a felon-in-possession charge. The firing sparked fierce push-back from Cousins' supporters, and Cousins subsequently sued, alleging he was the target of officers seeking to cover up their own misconduct.

In September 2017, Cousins got his job back thanks to a vote by city’s Civil Service Commission.