With New Pro Se Guide, ArchCity Hopes to Empower Citizens in Court and With Cops 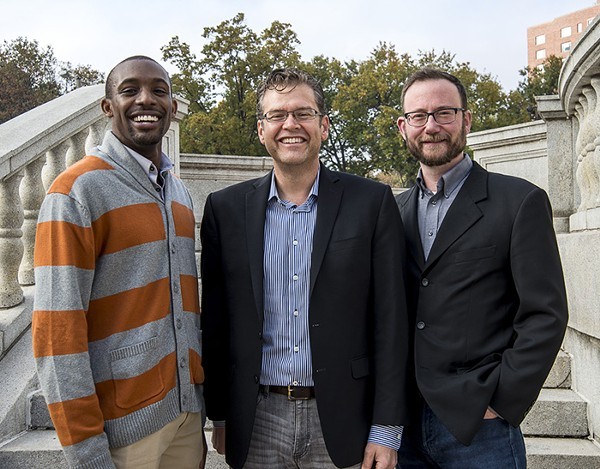 In two weeks, St. Louisans have an opportunity to help their fellow citizens make informed legal choices, navigate the justice system and advocate for themselves in interactions with police, as well as in court and in jail.

The nonprofit law firm ArchCity Defenders, which provides legal counsel to homeless and poor defendants, will debut its Pro Se St. Louis Guide at a June 28 launch event at the Luminary. The Pro Se Guide aims to help people, particularly those without lawyers who have been cited for low-level crimes, understand and protect their civil rights.

The organization hopes as many people as possible will attend the launch event, where volunteers will help to fold and distribute the pocket-sized booklets.

“We know that poor people and people of color are disproportionately targeted by police courts and jails, so we know that as a fact. And we know that the collateral damage and the consequences to people and their families is tremendous and also ongoing,” says Rebecca Gorley, communications director for ArchCity Defenders. “And so part of the guide is to not only have a direct impact in someone’s life but also to have a systemic impact in their lives, a systemic impact overall.”

Often, individuals living in poverty are both more likely to be targeted by police and less likely to have access to legal representation, Gorley says. An inability to repair a cracked windshield, for instance, may lead to failure on a safety and emissions test, leading an individual to have to use expired tags.

“Part of the emphasis behind this guide is that as we fight to change the system, there’s still hundreds of people going through the municipal courts and being both impoverished by these courts and criminalized and incarcerated by these municipal systems every single day,” says Sima Atri, a staff attorney at ArchCity Defenders. “So the thought behind the guide is that while we are trying to change these bigger systems, we can’t forget about those people who have to still go through the system every single day."

More than 90 percent of people who appear in municipal court serve as their own defense attorney. A lack of knowledge about their rights can lead some to plead guilty to crimes they did not commit, agree to excessive fines or even spend time in jail.

“We do the best we can with the resources we have, but we cannot represent everyone,” Gorley says. “And so, our hope is that this guide really gets into the hands of those who need that tool to advocate, defend, and represent themselves.”

To write the guide, attorneys such as Atri combined their extensive experience in municipal courts with the input of clients who have appeared in court undefended. The result is a thorough yet concise guide (all the information fits on a double sided piece of 11.5 x 17 paper) that spares no detail. The guide describes what a courtroom looks like, how to effectively represent yourself in municipal court, the implications of pleading guilty to a ticket, the importance of going to court to handle tickets before they become warrants and broader information about rights with police and how to understand tickets.

An important part of making this critical information accessible was implementing a clear and visually appealing design. To accomplish this, ArchCity Defenders issued a call for submissions from local designers. The final selection will be unveiled at the launch event.

“Design is the way we communicate, it’s what we understand, it’s the language we convey meaning with,” says Caitlin Metz, a local designer and educator who helped create parameters and templates for the project submissions. “And so I think bringing that into this guide, that is something that’s pretty terrifying or could be scary to the folks who need it most, the information that’s in it or why they would be needing to use it could be a really scary time. And so having good design that is readable or legible, that’s easily acceptable to folks, is really important.”

After assembling booklets, those who attend the launch event will circulate them at places like churches, libraries, community organizations, or neighborhood associations. In addition to the booklets created at the launch event, the guide will be available online for public access.

Atri believes wide distribution of the booklets is a good step toward increasing equity in the justice system. Still, systemic change is slow moving and will require sustained effort on many fronts.

“The guide is the small addition to try to [address] some of the issues that are either landing people in jail or cost them so much money because they don’t have lawyers or don’t necessarily know what they could be saying to reduce their fines in courts,” Atri says. “But ultimately, we need to actually change the system and not be funding our city through a criminal justice system.”