Brutal Beating on MetroLink Monday Results in Charges Against 3 Men 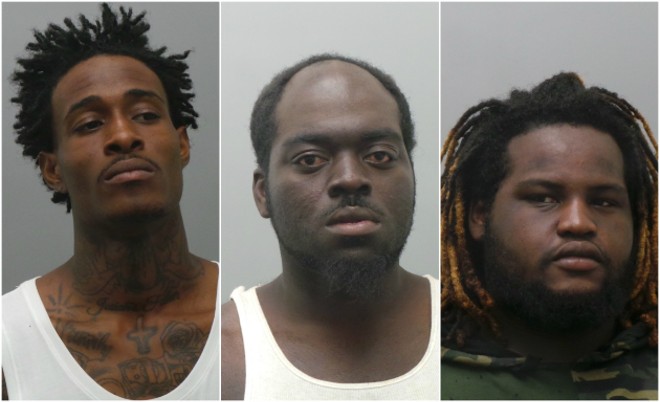 Update: St. Louis County police have released a video with images of the remaining suspects. It's posted at the bottom of the original story.

Three of six suspects have been arrested in a bone-cracking beatdown aboard a MetroLink train.

At about 4 p.m. on Monday, the men jumped a passenger on a westbound train, pummeling him on the floor as the MetroLink cruised between the Rock Road and UMSL South stations, police say.

One of the suspects, 23-year-old Jody Dale of Dutchtown, later told St. Louis County police the victim had previously robbed Dale's aunt, stealing cash and a gun from her. The beating was retribution, he said, according to court documents.

Police describe an ambush-style attack in a probable cause statement. One of Dale's accused accomplices, 23-year-old Jahma Swanigan of Tower Grove East, sat down across from the men's target. Investigators say surveillance video appears to show him say something under his breath and then signal to one of the others.

Moments later, the group swarmed the man, punching, kicking and battering him with their knees. The attackers allegedly cracked his eye socket and other facial bones. The man also suffered injuries across his body, police say. Swanigan was recorded standing over the man, pointing to different places on his body as the others attacked, according to court documents.

When the train arrived at the UMSL South stop, the six men fled.

County police arrested Swanigan a few days later at the North Hanley train station. Investigators say he admitted knowing the assault was going to happen, but he denied saying anything to the victim or signaling any of the assailants. He told police he only sat across next to him so he could film the beating. But surveillance video of the attack doesn't show Swanigan recording anything, police say.

Along with Dale and Swanigan, a third suspect was arrested in the following days. Eddie Price, 31, of the Peabody Darst Webbe neighborhood near LaSalle Park, was recognized by a Metro officer from previous incidents and taken into custody, authorities say.

All three men have been charged in St. Louis County Circuit Court with first-degree assault. Police are still searching for the other three assailants. They ask anyone with information to call them at 636-529-8210 or CrimeStoppers at 866-371-TIPS(8477.)
We welcome tips and feedback. Email the author at doyle.murphy@riverfronttimes.com or follow on Twitter at @DoyleMurphy.