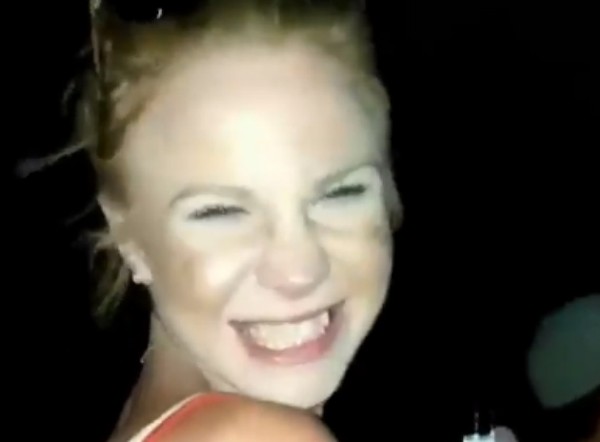 She already lost her waitressing job, and now the Air Force is booting a Jefferson County waitress who joked with friends about going "n****r hunting" in a viral video.

Twenty-year-old aspiring model Tabitha "Tabbie" Duncan had recently enlisted as a reserve Airman, but her newfound notoriety has nixed that, the Air Force Times reported. In an email to the newspaper, Lt. Colonel Chad Gibson of the Air Force Reserve Command described the video as "intolerable." Without specifically naming Duncan, Gibson said the service was in the process of releasing her.

Duncan was recorded on SnapChat as she rode on a truck, rolling down a dirt road in the dark. In less than fifteen seconds, she and her friends spit out enough N-words to make Jeff Sessions blush.

Here's part of the exchange that we previously posted.

Another idiot in a baseball cap: "We're going n****r hunting."

Online sleuths quickly identified Duncan and launched a successful campaign to get her fired from her job Social Bar & Grill, a Hooters-style restaurant in south St. Louis County.

Duncan has taken the worst of the hit, but she was far from the only offender. Numerous people have contacted the Riverfront Times to identify the narrator as a man named Joshua Davenport. His face appears briefly at the beginning of the video, just long enough to get a glimpse of his neck tattoo.

We reached out to Davenport on Facebook (where he had more pics showing the same neck tat), but he shut his page down shortly after. Before he closed it, he listed his fiancee as Brianna Haas, the name of the person who originally posted the SnapChat video. A copy of the footage was later posted on Facebook and has quickly spread across the world. Haas has also shut down her social media accounts.

Duncan apologized in an interview with the New York Daily News, blaming her comments in part on "underage drinking."

"I was intoxicated," she said. "I have black friends, I have black people in my family, I didn't mean it. I didn't know that I was being (recorded)."

Warning: the following video contains unedited sound clips of the same conversation. Listener discretion is advised. We welcome tips and feedback. Email the author at [email protected] or follow on Twitter at @DoyleMurphy.