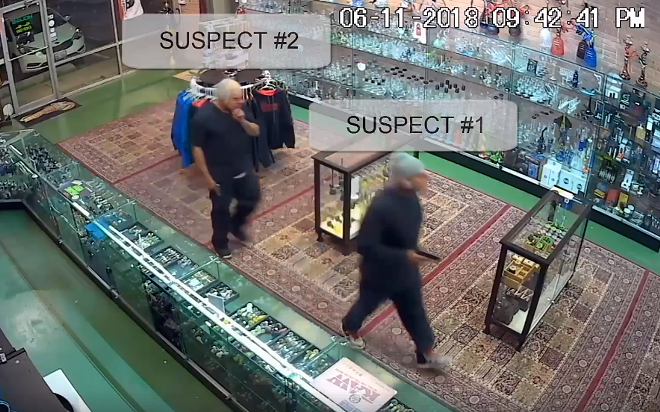 Police in the Metro East are curious: "Have you seen these clowns?"

It was about 9:40 p.m. when the two marched through the doors of the spacious head shop, bypassing the hookahs, posters and small glass pipes shaped like animals. The men found a clerk and demanded money from the cash register. Then they left with an undisclosed sum.

When police weren't able to find the men after nearly two days of searching, they released surveillance video clips of the stickup.

It's hard to tell what the suspects look like when they're not wearing clown masks, which is obviously the point, but police ask people to notice specifics about the men's clothing. One of the clowns, who topped off his big-nosed mask with a stocking cap, wore a pair of white-and-black Nikes with red shoelaces.

His accomplice's outfit was less distinctive — dark shirt, dark pants, dark shoes. He wore the mask of a balding old man with a ring of fake gray hair.