St. Louis Will No Longer Prosecute Marijuana Possession Under 100 Grams 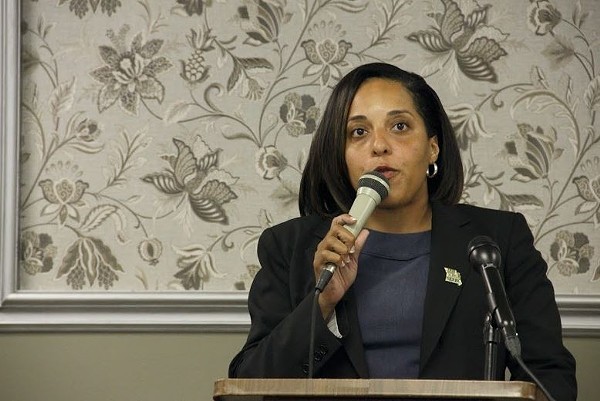 First the St. Louis Board of Aldermen voted to handle marijuana possession more like a traffic ticket than a criminal case — deciding in 2013 that anyone caught with 35 grams or fewer would be adjudicated through the city's low-level courts, not the circuit attorney's office.

And now St. Louis Circuit Attorney Kim Gardner says her office won't prosecute cases involving 100 grams of marijuana or less unless there are aggravating circumstances. In an email to staff yesterday first reported by the St. Louis Post-Dispatch, Gardner said her staff would begin reviewing and dismissing past cases.

“Effective immediately we will no longer issue possession of marijuana cases under 100 grams as the lead charge!” Gardner wrote.

Is it fair to say marijuana is now effectively decriminalized in St. Louis? Well, maybe not so fast.

Gardner's administrative decision follows an effort at the Board of Aldermen, led by Alderwoman Megan Ellyia Green, to do just that legislatively. Green's proposal, which ultimately failed, would have barred city staff from expending any resources on the possession of two ounces of marijuana or less — which translates to about 56 grams.

Gardner's new plan, obviously, goes even farther, but Gardner's decision only affects her office: The city counselor's office would still be able to issue citations. As the RFT reported earlier this year, despite the 2013 "decriminalization," police have continued to cite large numbers of people for possession, the vast majority of them black. The only difference is that their cases were then adjudicated by the city counselor's office, not the circuit attorney — and did not result in "criminal" charges but rather citations.

Those citations are not a get-out-of-jail-free card. Some attorneys warned that those citations still cause trouble on background checks. “People think this is nothing, but if you plead guilty to it, even in a municipal court, it would show up in a criminal background check. It doesn't matter how low the fine is," explained attorney Andrea Story Rogers.

Still, getting a mere citation when you're carrying a large quantity of marijuana would surely feel like a relief — although the U.S. Attorney's Office may prove a wild card. The Department of Justice under Jeff Sessions may not smile on the idea of suspects in St. Louis being turned loose after being arrested with 99 grams of marijuana — and the office has recently shown a willingness to prosecute cases in the city that would normally be handled by the Circuit Attorney's Office. (One example: a robber who roughed up a clerk at Jeni's Splendid Ice Creams might normally have been charged by Gardner's office with aggravated assault. Instead, federal prosecutors charged him with "interfering with state commerce." He's now looking at up to twenty years in federal prison.)

So, the ramifications of this could take awhile to sort out. But it's safe to say this should be good news for potheads — good enough, even, to light up a celebratory bowl. Just make sure you don't pack it with more than 100 grams.

Jeff Jensen, the U.S. Attorney for Missouri's Eastern District, tells us in an email, "Our office will continue to prosecute violations of federal law. Prosecution is based upon the sufficiency of the evidence and the prudent use of federal resources."

Worth noting: As states have decriminalized marijuana, federal prosecutors have in some cases picked up the slack. A report by the U.S. Sentencing Commission found that marijuana offenders comprised 93.8 percent of all simple possession cases charged by the federal government in 2013 — and that prosecutions for marijuana possession had risen 803.8 percent since 2013. And that was under President Obama.

The median sentence for those charged with simple possession by federal prosecutors at that time, the report found, was six months in prison.