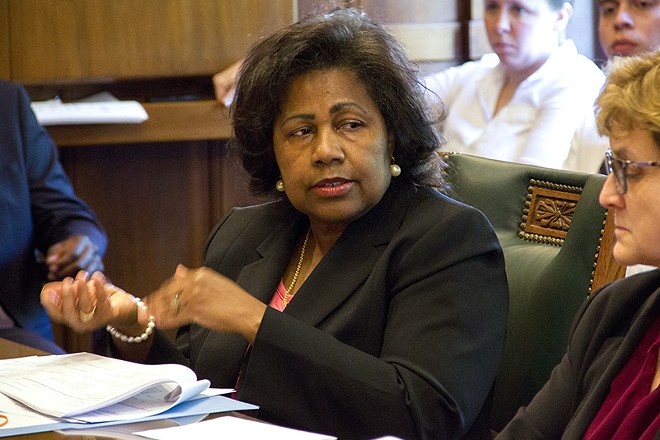 That's how, last month, St. Louis Mayor Lyda Krewson described the chances of the city approving a contract with a group of consultants eager to offer its assistance in figuring out how to lease St. Louis Lambert International Airport to a private company.

Krewson's dour evaluation came after the May meeting of the city's Board of Estimate and Apportionment, which meets every month to approve city expenditures and contracts. For the mayor and the privatization supporters, that meeting ended in confusion and disappointment, as Board of Alderman President Lewis Reed — like Krewson, one of the committee's three voting members — withdrew his support, and vote, under a blizzard of unanticipated objections.

However, those objections have apparently been smoothed over. At today's E&A board meeting, Reed added his yea vote to Krewson's, approving a contract with a host of entities, including Grow Missouri, Moelis & Company and McKenna & Associates. Comptroller Darlene Green was the lone dissenting vote.

As for Reed, the Board of Alderman president released a statement touting his efforts to ensure that the contract includes stronger transparency policies, as well as the addition of three minority firms to the ranks of the advisory team.

With the tweaks to the contract, Reed said said that the consulting team's work "is now something we can move forward with in better confidence than before."

In approving the contract with the consultants, Reed and Krewson are potentially setting the city on a historic track: If Lambert's operations go private, it would become largest American airport ever to do so. (See our cover story, "Flying Blind," for more detail.)

"The only reason to consider this is to get a better airport," Krewson said in a press release emailed to reporters after the vote. "We worked to make sure the team we put together has the expertise to protect the public’s interest as we explore this opportunity."

The statement also stressed that the city is not considering a literal sale of the airport, which is true — the exploration is only targeting a lease of the airport's operations. A privatization deal could theoretically create a legal way for the city to extract millions more from the airport's revenue than is currently permissible under federal law.

Granted, getting to that point is expected to take a lot of work, and it's not clear what conditions that hypothetical lease would have to satisfy to please the various entities that hold vetoes over process, a group that includes the Board of E&A, the Board of Aldermen, the FAA and a majority of the airlines that operate at Lambert.

At this point, though, the public does not wield one of those vetoes. That's one of the problems pointed out in a statement from Green, who came out against the deal at the meeting.

In a press release, Green's office argued that Lambert is well-run and is currently enjoying a "strong financial position" that includes 31 straight months of passenger growth and recent upgrades to its credit rating.

"To abandon the long and successful history of Lambert as a municipal airport through this politically expedient process is wrong," the statement read. "As today’s E&A vote to advance the privatization process passed 2-to-1 and the Airport Commission was left out of this decision, a public vote must be part of the process to decide the fate of the airport."

For now, though, the consultants are going to work, attempting to figure out what a good privatization deal should look like. Evaluating proposals requires expert knowledge. For other cities that have wrestled with various privatization dreams, it's also required millions of dollars to fund the research and diligence to ensure a city isn't getting fleeced. That's not going to be the case in St. Louis.

"No taxpayer money will be paid to the advisor team during the evaluation process," the statement from the mayor's office notes. This is true, as the process is being totally funded by the non-profit Grow Missouri. But it's also true that Grow Missouri is a non-profit funded and staffed by conservative philanthropist Rex Sinquefield — the sworn nemesis of some local Democrats for his (failed) attempts to convince voters to reject the city's earning tax.

When Sinquefield's hand in the airport privatization matter was revealed in January, it raised significant outcry among the city's lawmakers. Some of those critics viewed the billionaire's interest in privatizing Lambert's operations the same way you would watch a toddler reaching for a cookie jar.

And while it's accurate that the city isn't paying anything now for the consultants' expenses, the city's statement adds, "Grow Missouri, Inc. will be reimbursed for such costs only if the City reaches a final agreement with a private operator."

This condition, too, was a contentious point for critics of Grow Missouri's role, as it appeared to be a powerful monetary incentive for the advisors to guide Lambert to privatization, no matter the quality of the deal.

Krewson has previously gone on the record to push back against this line of criticism, insisting the city can always reject privatization if no proposal meets muster. Until now, though, that conversation has taken place in the realm of what-ifs.

With Grow Missouri's contract approved, the time for actual deal-making has arrived.

Editor's note: The story was updated after publication to add comments from Lewis Reed.