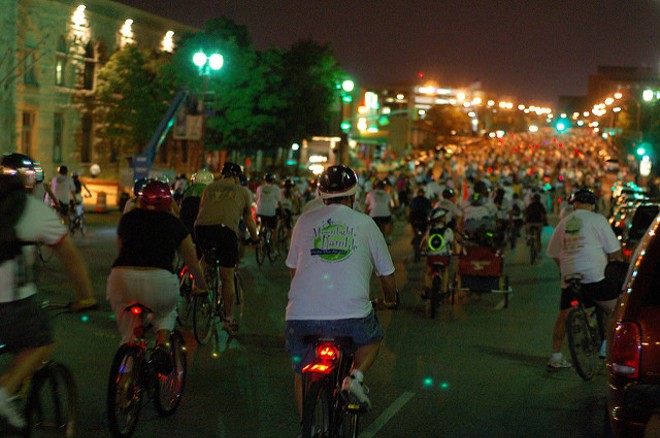 The Moonlight Ramble has new overlords, and they're canceling this year's event.

Hubbard Radio, which recently acquired rights to the massive nocturnal bike ride, announced today it was scrapping the 2018 Ramble but says it could still return next year.


"This was not a decision that was taken lightly," Hubbard said in a news release. "Our management team understands the rich history this event has in St. Louis, and we hope to bring the Moonlight Ramble back in 2019 as a safer and more enjoyable rider experience."

This would have been the Ramble's 55th year. Starting with a single rider in 1964, it has grown into the city's primary cyclefest, attracting thousands in recent years.

Hubbard blamed the cancellation on bad timing and rising costs. The company recently bought a pair of St. Louis radio stations — KSHE 95 and 105.7 The Point — from Emmis Communications. In February, Emmis announced the sale price as $45 million.

As part of the deal, which closed on May 1, Hubbard got the rights to the Ramble. That did not leave enough time to organize a safe ride, according to the company. Maybe next year.

Correction: An earlier version of this story misidentified Hubbard Radio. We regret the error.