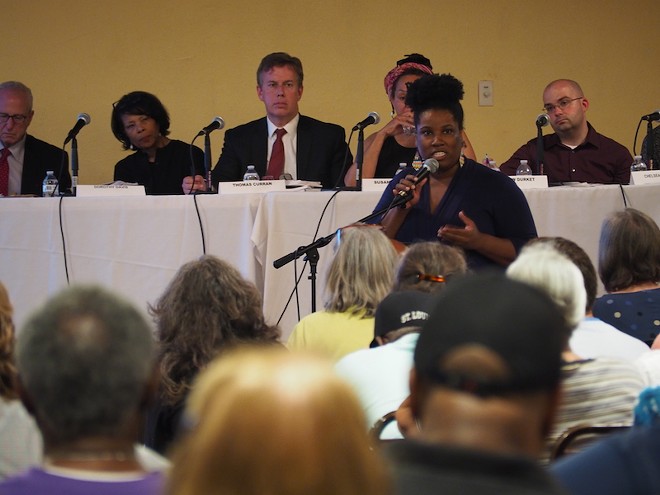 A massive new redevelopment project in University City continues to draw pushback from residents and business owners, who voiced concerns about gentrification, transparency and neighborhood impact at a public hearing Wednesday night.

After listening to more than three hours of comments, members of University City’s Tax Increment Financing (TIF) Commission did not vote on the project. Instead, they established a third public hearing for June 22 at University City High School at 6 p.m.

The $190 million redevelopment plan, proposed by St. Louis-based Novus Development, is expected to displace 67 homes, 58 apartments, two churches and a school. The new development will include a hotel, apartments and likely a Costco.

Novus aims to levy $70 million in Tax Increment Financing, or TIF, which allocates a portion of local property and sales taxes to redeveloping areas labeled with terms such as “blighted,” or deteriorating. In return, Novus expects the development will bring at least $100 million in tax revenue to the area.

To receive approval, the proposal must first get through the city’s TIF Commission, then its City Council.

Caroline Fan, executive director of Missouri Immigrant and Refugee Advocates, or MIRA, says many local residents and business owners she spoke to were unaware of the hearing.

In fact, Fan says, MIRA has taken it upon themselves to translate documents into Chinese and Spanish for these immigrants.

University City resident Farrakhan Shegog echoes Fan’s belief that University City has not communicated clearly with residents and business owners. Shegog’s home, former school and family-owned barber shop all fall in the affected area. Many citizens, he says, were unaware of the public hearing. Worse, they remain unsure of how this project will affect them.

The first public TIF commission hearing May 23 attracted more than 700 people, many of whom expressed similar concerns as last night’s meeting. At that initial hearing, hosted at the Mandarin House Banquet Center, the fire marshal turned away more than 100 members of the public.

Because University City hosted the second hearing in the same venue, on the afternoon of the meeting, resident Tom Sullivan lodged a formal complaint with the Missouri Attorney General’s Office. In an email to an assistant attorney general, Sullivan cited violation of Missouri’s Sunshine Law, writing “the Commission is planning a meeting for this evening in a venue that is likely to be woefully inadequate to accommodate members of the public, which is a violation of the law.”

Many citizens are now pushing for a Community Benefits Agreement (CBA), a legal document which aims to clearly establish a mutually beneficial relationship between a developer and a community.

Clair Antoine, who has been active in advocating for a CBA, grew up in the Third Ward. She is also the founder and treasurer of a political action committee called Missouri Civics Project.

Antoine explained an additional complication with this project. While University City has promised not to use eminent domain for owner-occupied buildings, at least 50 percent of people who live in the third ward are renters.

“I have an interest in social justice and racial equity,” Antoine says. “Knowing that the Third Ward is primarily African Americans and minority-owned businesses, lower income than the first and second wards, my concern is that there’s no one advocating for some of the residents.”

Documents available at the hearing claim the project will offer a slew of short-term and long-term benefits, including immediate funding for redevelopment of the Third Ward, economic development on Olive, employment opportunities for residents, neighborhood stabilization and growth, and increased property values. The documents also depict graphs of home values every year between 2006 and 2016. Unlike Wards One and Ward Two, the figures show, Ward Three has not recovered from the recession.

Residents who spoke against the development Wednesday night expressed concerns about how the venture may potentially affect the composition of the diverse neighborhood.

University City resident Julia Lucas grew up in the Third Ward. After moving to Ballwin, she returned to University City “to get away from big box stores and the urban sprawl they create.” Lucas also spoke about the potential traffic, pollution and environmental consequences of the development.

“I’m for development, but I don’t see why we would risk getting rid of stuff that is bringing people in from the city and putting in something like a big box store,” Lucas said. “Customers get on the highway, they go there, they shop and then they leave. So I don’t understand the wisdom of putting in a big box store as an anchor to development.”

Lucas, like many residents at the hearing, expressed additional concerns about Amazon rendering vendors like Costco obsolete.

Before residents spoke, Third Ward aldermen Stacy Clay and Bwayne Smotherson expressed fervent support of the TIF subsidy. Some residents also support it. Dennis and Helen Fuller have occupied their home in the second ward for 42 years. Both took the mic in defense of the project Wednesday night.

“I want you all to understand the revenue that we have supports a variety of things, one of the stellar things it supports is our school system,” Dennis said. “If we don’t support our school system, we are going to lose our community. You have teachers that are putting their own salary on the line for supplies, I don’t hear that about teachers in Clayton. I don’t hear that about teachers in Parkway, why? They have better tax support than we have here.”

Amidst the flurry of concerns and confusions expressed by the speakers, resident Sonya Pointer asked the TIF commission to delay the vote and not rush the process until they have further engaged and communicated with the community.