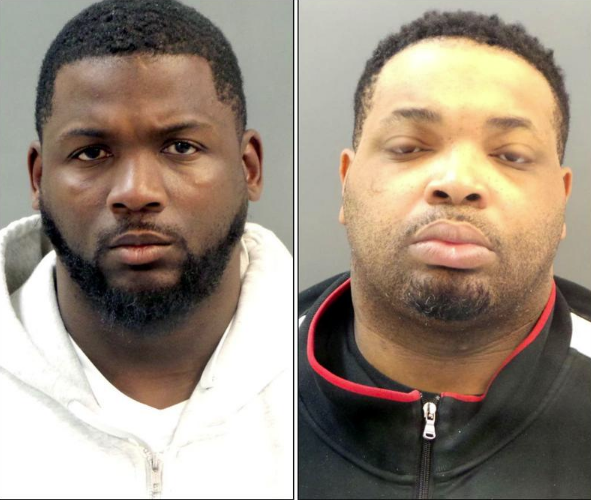 Two suspects connected to more than 100 car break-ins around St. Louis apparently had one more heist to pull — slipping their GPS monitors and going on the lam.

According to KMOX, which got the scoop this morning, the whereabouts of the suspects are "unknown," a fact confirmed to the radio station by Ward 7 Alderman Jack Coatar.

The two suspects, Lamonte Brown and Jason Holmes, were out on bond after police arrested them in April. According to online court records, Brown are Holmes are each facing 36 criminal charges, a reflection of the mind-boggling scale of what amounts to a criminal empire of car break-ins (many downtown, many involving band gear) that stretch back to 2014.

Coatar is, understandably, none too thrilled that the suspects who allegedly stockpiled mountains of loot in various homes — so much merchandise that they apparently couldn't even sell it all before they were busted in April — are now back on the streets. Coatar had previously objected to a judge's decision to lower the suspects' bonds, granting them freedom while awaiting trial.

"It’s all very disappointing," Coatar told KMOX. "This could have been avoided, these guys never should have made bond to begin with."

In fact, Coatar had previously blasted the St. Louis Circuit Attorney's Office for the release of the suspects, telling the St. Louis Post-Dispatch on May 17 that the prosecutor's office failed to notify detectives before a bail reduction hearing. He also faulted the office for contributing to delays in the court proceedings, blocking opportunities to add conditions to suspects’ bail.

The alderman also blamed prosecutors for not providing information to the Circuit Court Judge Nicole Colbert-Botchway, who lowered the bail on Brown and Holmes on April 27 from $150,000 to $50,000. Ultimately, the two were permitted to buy their freedom for ten percent of that amount — just $5,000 each.

"That’s what’s so frustrating about the whole thing, it’s been all over the paper, all over the news and the next thing we know, these guys are out on the streets because the prosecutor can’t do her job,” Coatar told the daily, directing his ire at Circuit Attorney Kim Gardner.

But Circuit Attorney spokeswoman Susan Ryan fired back, telling the Post-Dispatch at the time that prosecutors opposed the bond reductions. She laid blame at the feet of police and the judge.

"Judges make those decisions," she said in the May 17 story. "We secured the $150,000 initial cash-only bond because we were told by police that they would bring more evidence to us for additional charges. Police have not done that to date."

Two weeks later, police did bring dozens additional charges against the suspected members of the theft ring. The new charges also included new details about Brown and Holmes. Police told Post-Dispatch that the two men worked as a team to "break into vehicles, targeting cars with out-of-state license plates parked in tourist areas."

Update, 3 p.m.: In an email, SLMPD spokeswoman Schron Jackson said that Holmes and Brown were fitted with GPS monitors after a May 16 court order, which also came with an order of protection that barred them from entering the Downtown and Downtown West neighborhoods — the very hunting ground where the two men allegedly broke into dozens of cars over the past several years.

But on May 29, Holmes and Brown "forcibly removed their bracelets," Jackson wrote. The devices were recovered at the offices of the Eastern Missouri Alternative Sentencing Services, which maintains probation and supervision services such as GPS monitoring. Police do not know how the GPS bracelets wound up at that location, Jackson said.

In any case, it took two days for the news to reach city police investigators.

"Detectives continue their efforts to locate the suspects and take them back into custody," Jackson wrote. "Anyone with information on the whereabouts of Jason Holmes and Lamonte Brown is asked to call CrimeStoppers at 866-371-TIPS."