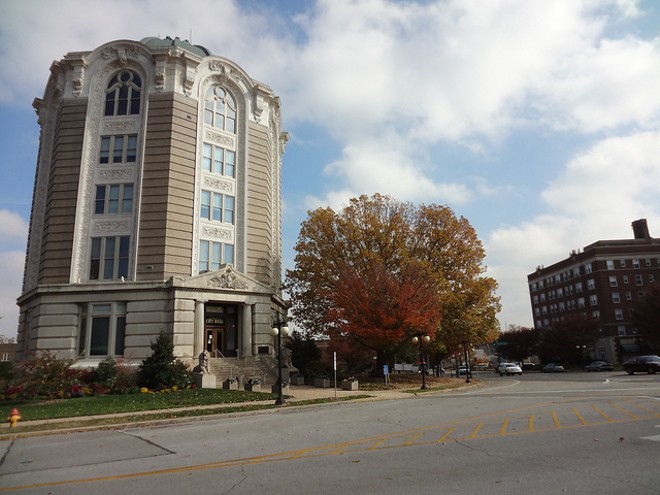 University City Councilwoman Paulette Carr is on the warpath.

In a Monday newsletter that ran over 5,000 words, she charged that "outside forces" are conspiring to tank a $190 million tax increment financing plan to gut the residential neighborhood near Olive Boulevard and 170 — one largely occupied by minority residents — to accommodate a big-box store. Carr warned that negative press and public outcry was being stoked against the St. Louis County suburb's best interests.


But Carr didn't just blame the Post-Dispatch editorial board for opposing the city's plan, which would gift $70 million in future tax revenue to Novus Development in exchange for building a shopping center and other projects. She also went after her cleaning woman.

Carr took on a letter sent last month to the University City TIF Commission, and also published in the St. Louis Business Journal, by a woman calling herself "Katherine Russ." Under the headline "University City
Development Proposal Mirrors Failed Sunset Hills Plan," the op-ed claimed that Novus had attempted to accomplish a similar project in Sunset Hills — with disastrous results. (You can read the non-paywall version on Reddit.)

But Carr knew the name on the letter. It was, she wrote, "the pen name of a woman I employed to clean my house," a neighborhood activist in Sunset Hills named Kathy Tripp.

So Carr fired her. By text.

"Kathy, I received a copy of a letter from Katherine Russ," Carr wrote, according to a screenshot of the May 22 text message Tripp later shared with Riverfront Times. "Your services are no longer needed."

That wasn't all. In the Monday newsletter, Carr accused Tripp of writing to the Business Journal under a "false name," and added, "The lack of a proper attribution the author or authors suggests to me that [sic] had something to hide." Carr also included screenshots of her text conversation with Tripp, which featured the now-fired cleaner stating that she "was asked to write" the letter, and that it was a lawyer who asked her to send it to the TIF commission.

However, in an interview with Riverfront Times, Tripp insists that Carr misinterpreted the texts. There was no conspiracy, she says, noting that she, not the lawyer, is the letter's sole author. Tripp says the attorney she mentioned to Carr acted as an "editor" in the sense that he helped her cut a few paragraphs to reduce the article's length. (Tripp declined to name the attorney.)

"He didn't put any information in there that wasn't already in there," she says. "I wrote it. I just asked an attorney to edit it for me."

Beyond that, Tripp says she wasn't trying to conceal her interest in the project. She cleaned Carr's home for more than two years, and she says they openly discussed her previous work as a freelance writer in California under her maiden name, Katharine Russ. (Carr and the Business Journal apparently misspelled it "Katherine".)

At one point, Tripp says, she'd raised the subject of Novus' plans with the councilwoman. According to Tripp, Carr asked her not to discuss it, and Tripp respected the request.

In an additional text message Tripp shared with RFT — a message Carr did not include in the newsletter — Carr explained her decision to terminate the cleaner: "I work out of my home and I no longer feel comfortable with you there. This is not a good fit. There is nothing else to say. Good luck."

To Tripp, the action smacks of retaliation — and being put on blast in Carr's newsletter added to her sense of being treated badly.

"I felt like I was being fired for giving an opinion," she says. "I just felt that was really unfair. I did not deserve what Paulette Carr said about me in her newsletter."

The drama is just the latest wrinkle in the controversy around the proposed development in University City, which would see about 50 acres in Ward 3 razed and redeveloped to make room for a big-box store and shopping center.

Last month, during the first public hearing to address the plan, Novus Development president Jonathan Browne strongly hinted that the big-box store is Costco. Speaking to a standing-room only crowd that totaled more than 400 people, Browne reportedly said, "You do a little math here. Let's see how smart you are. There's three wholesale clubs. It's a wholesale club. It's not BJ's. It's not Walmart [Sam's]."

Proponents of the deal say that the massive tax giveaway is necessary to land a significant economic anchor in an area of the city that's long struggled. Of the $70 million in TIF revenue, Novus has pledged $13.8 million for homeowner grants.

University City Patch reports that the development plan would displace 67 homes, 58 apartments, two churches, a school and seven property owners who rent to dozens of businesses. In return, however, Browne and the deal's backers say the big-box anchor and shopping center will bring more than $100 million of tax revenue to the area. According to a proposed relocation plan, residents who own their homes could receive an additional $10,000 toward buying a new house in the ward, or $1,000 to move outside the ward but remain in University City.

But to Tripp, the plan raises troubling similarities with Novus' failed attempt pull off a massive TIF-funded deal in the Sunset Manor subdivision of Sunset Hills. More than a decade ago, Sunset Hills' considered giving Novus $62 million in tax revenue. The deal sought to replace 254 homes with a $165 million shopping center.

Tripp was among the subdivision residents who fought fiercely against the deal. Ultimately, in 2006, the plan fell through, as Novus lost its financing for the development. In the aftermath, homeowners who'd expected to sell their homes at a premium were left to pick up the pieces. Some bought new homes and had to deal with second mortgages they suddenly didn't need. Others had gutted their homes, believing Novus would soon bulldoze them anyway.

Novus, Tripp warns, has a history of over-promising and leaving communities in the lurch. She questions whether Novus has an actual financing and commitment from Costco, and she doubts University City's claims that it won't rely on eminent domain to clear out residents currently in the way. (Novus' Browne has written a point-by-point rebuttal to Tripp's letter, which can be read in full here.)

Still, Tripp says her concerns about Novus doesn't make her the "outside force" described in Carr's newsletter.

"I had no plans at all to derail the project," Tripp says. "It was to make sure the city understood who they were dealing with. I just wanted to make sure they did their homework and nobody got hurt."

Editor's note: The story has been updated to correct an inaccurate description of the 50-acre area under consideration for redevelopment. We regret the error.