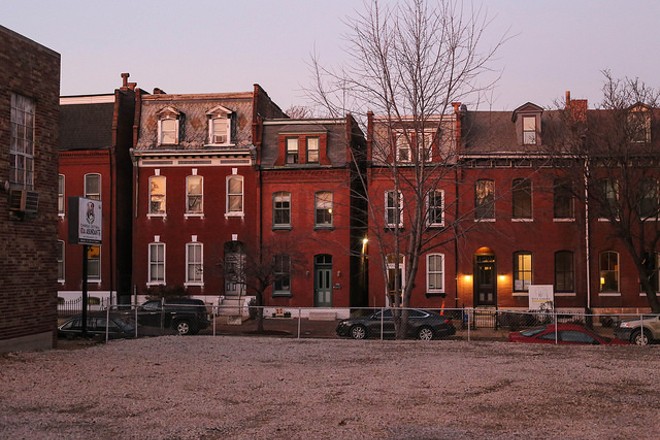 After a violent week that saw beloved bartender Peyton Keene shot to death outside his workplace, followed by a second shooting last weekend, some Soulard residents are feeling a growing sense of unease.

"The only thing I ever feared at this intersection was seeing a bicyclist get hit," says Lisa West, a Soulard resident and a regular at Bastille Bar and Grill, the LGBTQ mainstay where Keene tended bar. “Now, it feels we’re being targeted. It feels we’re sitting ducks.”

West and her neighbors Joe and LuAnn Denton decided to plan a New Orleans-style second-line parade through Soulard. “We’ve done funeral marches for others in the neighborhood, and thought this would be a good way to honor Peyton,” West says, sitting on the sidewalk outside Bastille.

For others, though, the march is also an attempt to defy the neighborhood’s recent violence.

“I see this as a protest march,” says one passerby eavesdropping on West’s conversation.

Some Soulard residents say they feel anxious, in part because they believe Keene’s murder may have been related to a previous act of violence in the neighborhood.

West is one. "It all started with a simple act of kindness," she says.

The act of kindness took place February 8. As the RFT previously reported, Keene saw the owner of the costume shop next door topple to the ground as she tried to flee a fight. Keene rushed over to help the woman, and was assaulted.

Keene was later called upon to identify the suspects and, friends say, looked at a police lineup.

Neighbors say they believe two of the four men involved in the fight were employees of Harpo’s Soulard. But owner John Rieker says this is not true, and that none of those in the fight were his employees. (The seven-month-old bar, which has a successful sister concept in Chesterfield, abruptly shut its doors last week.)

Then, around 11:30 p.m. Saturday, a man threw rocks at Bastille’s patio. When a bouncer confronted him, the suspect left — but returned with a gun and opened fire on the bouncer. Police say the bouncer “retrieved his personal weapon” and shot back, striking the suspect in the knee.

The suspect, described only as a 25-year-old black male, left the area, but was later found at a local hospital. His condition is reported to be stable; police say a warrant has been issued for his arrest.

Police would not comment on whether any of the incidents are related. Anyone with information is asked to call CrimeStoppers at 866-371-TIPS.

In the mean time, a memorial service for Keene’s life will be held at Bastille this Wednesday at 6 p.m., followed by the procession which will include family members, Soulard’s ubiquitous golf carts, prominent drag entertainers including Jade Sinclair, Trixie LaRue, Adria Andrews and the House of Highland, contingents from Pride St. Louis, Tower Grove Pride, and Rudis Leather Society, neighbors, friends, and those wishing to stand in solidarity.

Keene didn’t hide from danger. As the community honors and mourns him, its members are determined not to hide either.

Editor's note: We updated this post after publication to include additional information from Harpo's owner John Rieker. Rieker says none of his employees were involved in the fight Keene later testified about.