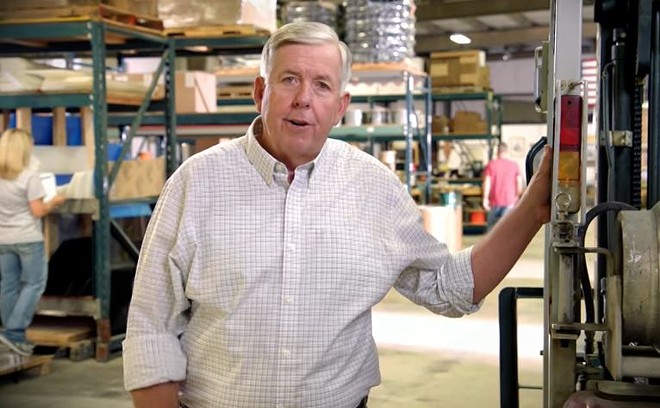 On Friday, Missourians will bid a final farewell to Eric Greitens, who has an exciting post-gubernatorial life waiting for him in various courtrooms. Replacing the former political wunderkind is Lt. Governor Mike Parson, a fellow Republican, but one cast in a far different mold.

Parson is a devout Baptist, an Army veteran, a farmer, a former sheriff and a longtime presence in the state legislature in both the House and Senate. Whatever kind of governor he'll turn out to be, he'll have to work to establish a legacy outside of Greitens' jagged shadow.


In the mean time, let's run down a five points we do know:

1. Parson is boring, but maybe in a good way?

As governor, Greitens was a showboat among canoes, constantly bouncing between in-house PR stunts and photo ops. Parson doesn't seem to have that kind of style in him. Back in March, the St. Louis Post-Dispatch dedicated an editorial that positively fell over itself trying to find ways to praise Parson's mildness as strength, extolling his lack of "flash and pizzazz" as a boon to an office in desperate need of a new coat of dignity.

At the same time, Parson hits all the major notes of a modern Republican politician. His 2016 campaign featured TV ads slamming Obamacare, defending the Second Amendment and comparing his Democratic opponent to Hillary Clinton. And unlike Greitens, the state's conservative-dominated legislature appears to not his hate guts quite so much. Parson may be dignified, but that's not necessarily good news for Democratic lawmakers. Think of him as the Mike Pence to Greitens' bombastic outsider Donald Trump. Republicans are ecstatic. Democrats? Not so much.

2. He's got a soft spot for lobbyists

If there's any knock on Parson, it's that he's shown a marked affinity for letting lobbyists pick up the check on meals. In 2017, the Post-Dispatch put him on blast for being the only statewide elected who accepted lobbyist gifts. According to the Missouri Ethics Commission, he's also the only statewide elected official to accept significant lobbyist freebies in 2018. (We'll let that $9.24 slide this time, Jay Ashcroft.)

Granted, considering Greitens is facing questions over potentially millions of dollars in "dark money" — some of it possibly "foreign in origin" — it feels somewhat petty to quibble over several hundred dollars. But Parson's record is still worth noting; In the past several years, the legislature has talked a big game about getting lobbyist gift-giving out of Missouri politics. The state's new highest official isn't on the same page.

3. He believes gays are going to hell

Parson is a Baptist, and his beliefs about religious liberty, same-sex marriage and abortion wouldn't raise any eyebrows with his fellow congregants on Sunday. In a 2017 Q&A with Baptist magazine Word & Way, Parson weighed on the difficulty of the confronting the "homosexual issue" while also making it pretty clear that he thinks those homosexuals are bound for a lake of fire.

Of homosexuals, he said, "I’m old school. I know how I believe, I know what’s going to happen to these people." A few lines later, he indicated that he'd be opposed to firing a hypothetical longtime employee just because they're gay. In a 2016 interview with the Missouri Times, Parson groused about the failure of a controversial religious freedom bill, telling the interviewer, "I think that those with a religious objection to participating in gay marriages should be protected from any attempt to force their participation."

And of course, you seemingly can't be a Republican politician without constantly talking about guns and trying to tear down the state's abortion rights. Parson hits both points: He sponsored a 2007 expansion of the state's "Castle Doctrine," and on his 2016 campaign website, he wrote, "[O]ne of the proudest statistics I can point to from my time serving this state is that the number of abortion facilities in Missouri has gone from ten to just one."

4. He broke with Greitens on low-income housing tax credits

One of the most compelling story lines in the ongoing Greitens saga is the mater of low-income tax credits. Earlier this month, Greitens accused the industry of being run by "ripoff artists" and "tax credit millionaires," and his attorneys argued that players in the low-income housing tax credit industry angry about his opposition were behind the $120,000 payoff to Al Watkins, the attorney representing the ex-husband of the St. Louis hairdresser at the center of Greitens' downfall.

Parson has publicly disagreed with Greitens on the matter. After Greitens stacked the membership of the the Missouri Housing Development Commission with the goal of eliminating the state's allocation to the low-income housing tax, Parson objected, saying that it would harm rural Missourians and reduce housing for the disabled and elderly. Among the ten members of MHDC, Parson was one of the two votes refusing to support cancellation of funding of the program.

5. He pronounces it "Missouri"

Parson grew up in a rural town of 356 people. He's a farmer and small-business owner. He talks with an authentic twang. And yet, according to the campaign ads he ran in 2016, Parson appears to violate all known principles of state politics by failing to pronounce the state's name with the distinctive "Missourah" flourish. Suffice to say, this scandalous choice probably deserves a special House investigation. Is it impeachment worthy? The committee's wise judgment, surely, will be required.