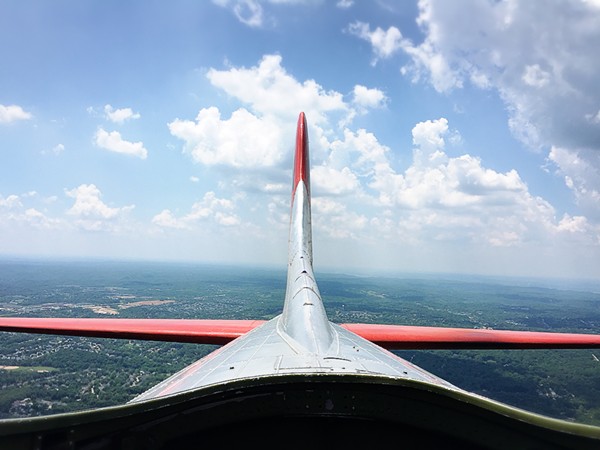 The B-17 bomber is breathtaking. You’ve seen it in the movies, you know it from old photographs and, if you’re like me, you even researched the heck out of it in advance of meeting one. But none of this prepared me for walking around a corner in an airplane hangar yesterday and coming nose to nose with the WWII beauty just sitting there in all her glory.

Currently housed at Million Air FBO at Spirit of St. Louis airport in Chesterfield, The Madras Maiden is nothing short of majestic. Her body gleamed in the sun and her wings stretched out gracefully. And though her four engines sat motionless, they still appeared hungry for the air.

She was glorious. She was a queen. She was ready to go. And we got to fly with her. 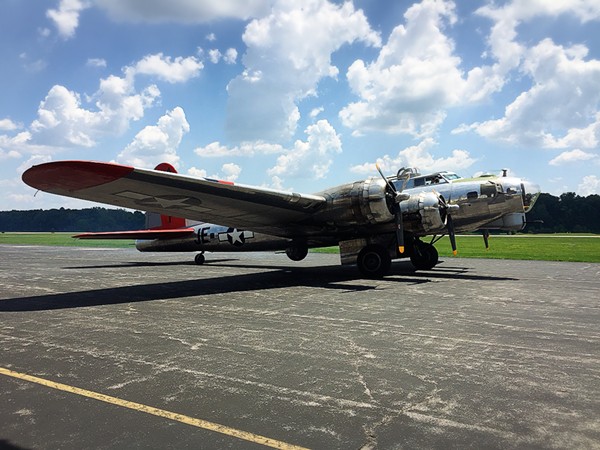 Of the more than 12,000 B-17s that were manufactured, only eight or nine in the world are currently airworthy. And only four of those tour and give rides. This fine specimen, which never saw combat, just swooped into town to give St. Louis the experience of a lifetime. Those who want to a take a ride can do so — for the right price — this coming weekend, with takeoff and landing in Chesterfield.

This “flying fortress” was built in 1944 and has arrived in the area courtesy of the Liberty Foundation, a non-profit organization founded to celebrate World War II veterans. It has exactly one employee: Scott Maher. Mr. Maher organizes the 50-odd tour stops that the Madras Maiden makes in a year to help to educate the public about WWII and our veterans. The B-17 flies today, he says, “as a tribute to the courage and commitment of all the men and women who served our country in times of need.” 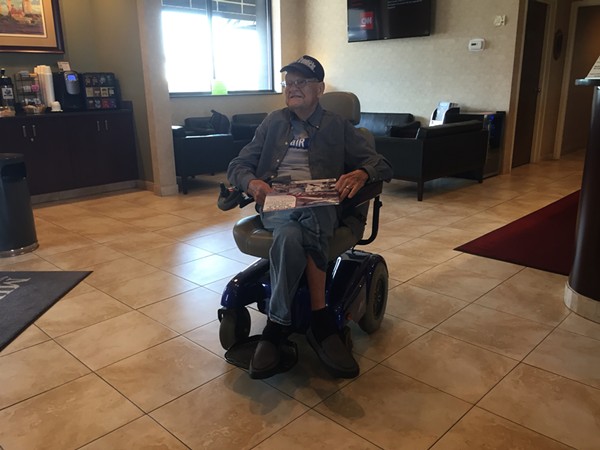 Everyone else involved with the Liberty Foundation is a volunteer, from the pilots to the maintenance crew to the web designers. Among the volunteers are real WWII veterans. The foundation tries to have one or two at every tour stop to answer questions for curious flyers.

At Million Air yesterday, we got the full experience, including our own featured veteran. General Ron Youngs brought along his granddaughter Alison Youngs. General Youngs graciously answered our questions and said that he was so excited for this flight that he’d recently trouble sleeping.

Also along for the ride was John Russell, a retired Air Force brigadier. During the flight, he took a seat by the cheek guns at the entrance to the chin turret and showed us visitors around the area, motioning to where men would’ve been placed while doing their jobs. He even offered to take selfies with us. 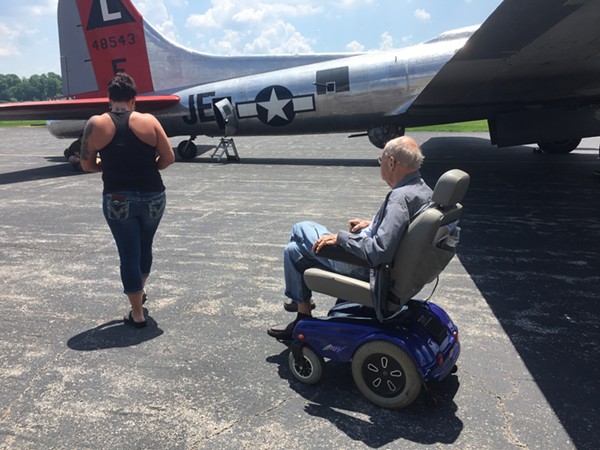 The pilot for our flight, Bob Hill, had flown in from Nashville. He was joined by co-pilot Stuart Goldstein and Jon Eads, who is the plane’s main mechanic and coordinator. Their passion was contagious.

“The plane is an educational outreach tool to provide historical flight experiences to the public," Hill says. “We hope that it serves to motivate and inspire people.” By that, he's not only hoping young flyers will seek out jobs in aviation — he hopes the B-17 sparks curiosity and educational exploration in general. He knows that flights like these can be formative experiences. 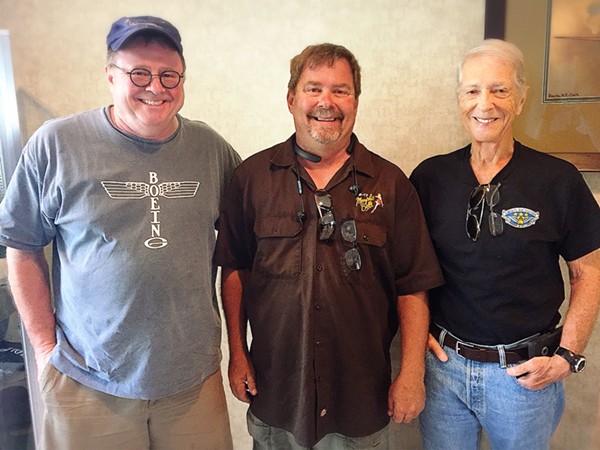 Hill's remarks also underscored why these tours are so important to so many people who wish to honor fallen members of the U.S. Air Force. “We can visit monuments and battlefields on the surface," he says, "but we can never visit the battlefield in the air.” Nearly eighty years after World War II began, the B-17 is the closest we can get.

I brought along my own expert for the flight, my friend Sarah Wright. Her grandfather, Wilbur Wright, flew in a B-17 in the war. He was stationed out of North Africa and was a top turret gunner and a technical sergeant. (You can see him here in photo No. 8; he’s the handsome guy on the far right leaning on his bicycle.) She was very emotional about the flight, saying it helped her feel like she was experiencing history and that she felt honored to stand in the same spot on the bomber where her grandfather would have stood. 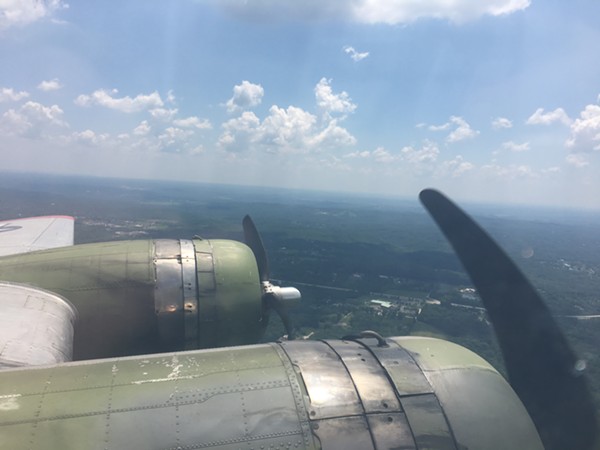 Before we took off, we were warned that it would be hot on the plane. It’s unpressurized and unairconditioned and yesterday, of course, was a scorcher. We heard that it can get up to 130 degrees in there, so we hydrated on the inside and out, both chugging water and dousing our clothes to stay cool. We needn’t have worried. Yes, it was hot. But with the proper precautions, we came out just fine.

The flight was amazing. The plane lifted off of the ground with grace and as soon as we were at cruising altitude, they told us we could get up out of our seats and walk around to check out the different positions and sights. The views were incredible and all of the historically accurate props helped us to see what similar planes might’ve looked like while in active duty. 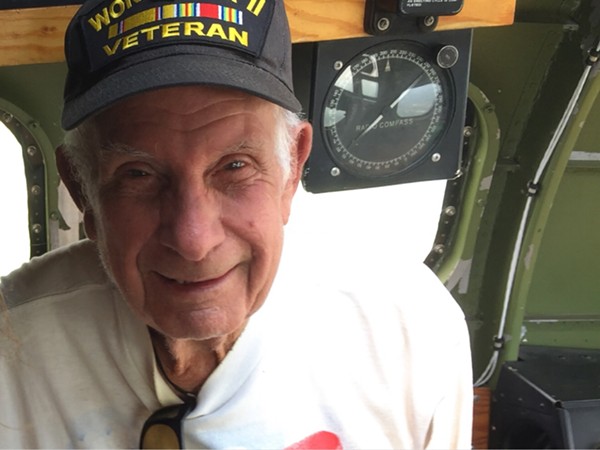 And though the crew was very helpful, those who don’t tolerate heat well or have mobility challenges should do research before committing to a flight. Getting from the back of the plane to the front was not particularly complicated but it did take a bit of maneuvering.

For example, there is a section in the middle of the plane that hovers above the (closed) bomb doors at the belly of the B-17 that is a bit intimidating and difficult to cross. It was described as a catwalk, but it’s really more like a six-foot balance beam with ropes for railings. In flight, with the wind whipping, crossing at this little section was wild, like something out of an action movie. Thankfully, all of the passengers on our flight made it across and back without issue, nervously laughing all the way.

When we started exploring the plane, we went up to the cockpit and see the pilots at work, then from there we crawled down through a short tunnel and popped up into the chin turret to catch the amazing front view from there.

Then, on the way back to our seats, we took some time at the radio desk, where they had the hatch open above. We stuck our heads out of the hole a bit into the wind and saw the curve of the Earth. It was exhilarating. 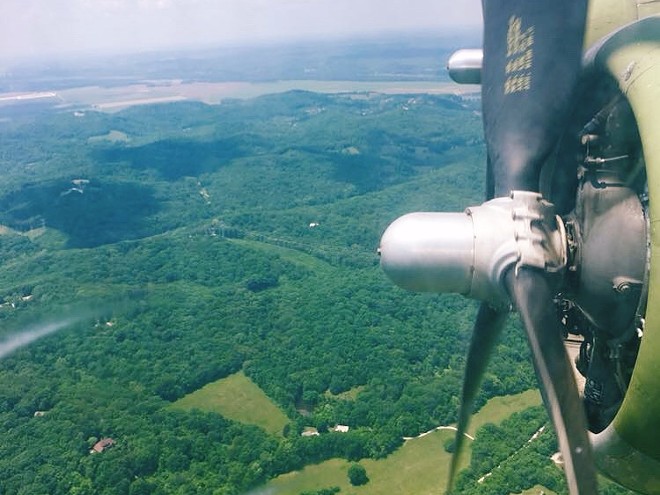 Our flight ended with a delicate, feather-soft landing. We wanted to go back up immediately.

The flights are not cheap. Flyers who are not members of the Liberty Foundation will pay $450 for a 30-minute ride. But to be able to go up in the sky and experience this with real WWII veterans (on a plane that costs more $5,000 per flight hour to operate), somehow feels like a steal.

But if you don’t want to fly (or pay the price to fly), the Liberty Foundation still welcomes you to stop in and check out the plane. At the end of each touring day, staffers open up the plane to people who want to take a peek. You can explore the parked plane inside and out. Families with children are encouraged to bring their wee ones, too.

The Madras Maiden will be available for tours in the St. Louis area on Saturday, June 2 and Sunday, June 3 from 10 a.m. to 5 p.m. each day. If you’d like to experience the flight for yourself, contact the Liberty Foundation at 918-343-0243 or visit LibertyFoundation.org for more information.