Eric Greitens Stopped for Speeding, Doesn't Get a Ticket 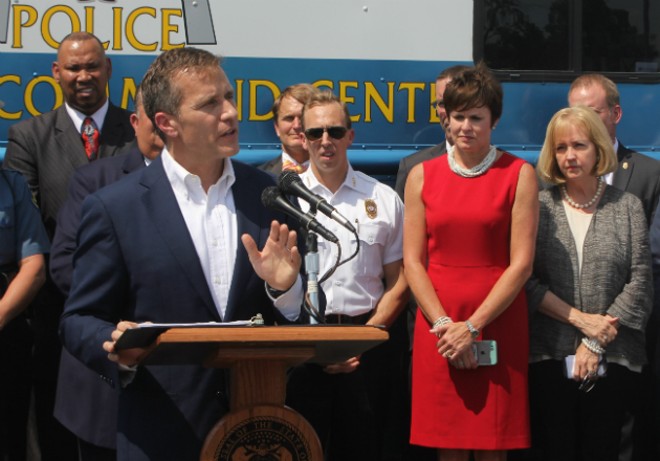 Governor Eric Greitens had an even better week than you thought.

Just four days after St. Louis prosecutors dismissed a felony invasion of privacy charge, he was able to duck a speeding ticket in rural Missouri. Add in his recent success on the conservative bingo circuit, and he's on a real hot streak.

The governor was pulled over about 11 p.m. on Friday as he whizzed through Truesdale in Warren County — and police let him go. The traffic stop was first reported by the St. Louis Post-Dispatch's Jack Suntrup, whose job includes repeatedly posing questions as our gutsy governor (have you heard he was a Navy SEAL?) breezes past.

Greitens spokesman Parker Briden told Suntrup by text message that the governor was heading out to pick up some forgotten medicine when he was caught driving 41 miles per hour in a 30 mph zone. He was apparently spending the weekend at his vacation home in Innsbrook, which is next door to Truesdale.

Briden painted the car stop as an example of a normal guy out doing normal stuff.

"It was a friendly interaction, and there was no need for a ticket," Briden told the daily by text message. "The Governor is a regular person. He runs regular errands. He picks up his own pizza. He takes his boys to the store. He takes his family to the playground."

Last week, the governor rode with security detail to St. Louis Circuit Court where jury selection was set to resume in a case sparked by an affair with his hairdresser. The woman claimed Greitens blindfolded her, tied her to a pullup bar in his basement and took a photo of her while she was partly naked. She says he threatened to release the photo if she told anyone.

Prosecutors dismissed the invasion of privacy charge on May 14 after a judge ruled Greitens' attorneys could call St. Louis Circuit Attorney Kim Gardner to testify. On the courthouse steps, the governor insisted it had been a humbling experience and he had emerged a changed man. But it is not over yet. Jackson County Prosecutor Jean Peters Baker has since been named as a special prosecutor to take over the case.

Gardner's team is still handling a second criminal charge of computer tampering. He is accused of taking the donor list from a charity he created to help military veterans and using it for his political campaign.

But hey, at least he landed on a cop who saw no need for a ticket. As we said: a real hot streak.