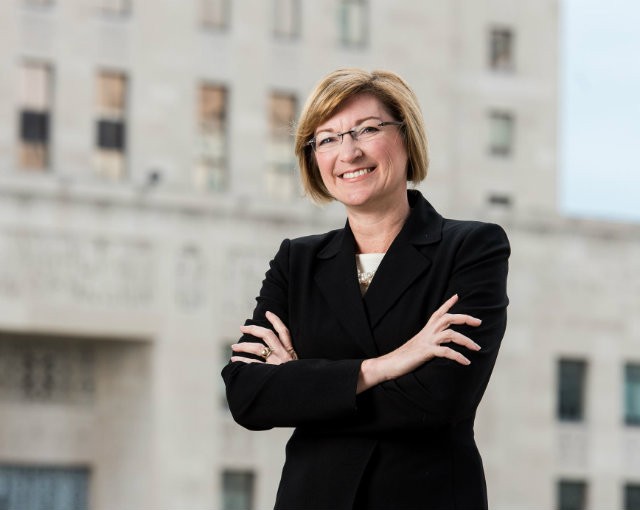 Jean Peters Baker, the elected prosecuting attorney of Jackson County, has agreed to take on the invasion of privacy case against Governor Eric Greitens.

In a statement, St. Louis Circuit Attorney Kim Gardner said that Baker had agreed to take on the assignment — and that Judge Rex Burlison had signed off on her appointment.

"Ms. Baker is an experienced prosecutor who is widely credited with being unafraid of tackling difficult cases," Gardner said in a statement. "She is respected by both the public and the legal community. Ms. Baker will conduct an independent review of the facts, evidence and law and make an independent decision about whether to refile charges of felony Invasion of Privacy. If she chooses to pursue charges, the case will remain in the City of St. Louis Circuit Court."

In a statement of her own, Baker said she has already assembled a team of prosecutors. "I directed my staff that we will go about the review of this case as we review any case," she said. "It will be thorough, and our decisions, as I have stated before, will be made without fear or favor."

Last Monday, Gardner shocked the state when she chose to dismiss the invasion of privacy charge against Greitens after three days of jury selection. She said it was because her attempts to avoid being called as a witness in the case had failed.

Greitens' lawyers, however, suggested the dismissal was simply a way to save face. The case hinged on whether Greitens took a photo of his hairdresser while she was partially nude, taped to a pullup bar and blindfolded — and no photo (or evidence of its deletion) has ever been found.

Scott Rosenblum, one of Greitens' attorneys, had confidently predicted from the courthouse steps, "This case is never going to be charged again, there's not going to be a special prosecutor."

He's now been proven wrong on at least one count. Will the new appointment result in Baker now refiling the case?

Gardner, who like Baker is a Democrat, argued in her statement that the answer should be yes.

"I continue to believe in the credibility of this victim. I also believe there is ample probable cause to re-issue this charge against Governor Greitens. I will be sharing the evidence we have collected on the Invasion of Privacy case with Ms. Baker immediately," she said. "I believe the accusations made by Mr. Greitens, his defense team and their political operatives are unfounded, without any merit and politically motived. However, when the role of the prosecutor distracts from any criminal case she is prosecuting, with or without cause, the best course of justice is to transfer the case to a new pursuer of fact."

The clock is ticking — legal observers believe the statute of limitations will run in about a month. "We will need to work as quickly as possible," Baker acknowledged in her statement. "We do not know what the result of the review will be. But let me stress that this review will be made solely on the evidence. Politics, affiliations or other matters beyond the evidence will not play a role."

Greitens continues to face a different felony case filed by Gardner's office for computer tampering related to campaign fundraising. His lawyers have sought to have Gardner barred from handling that case.