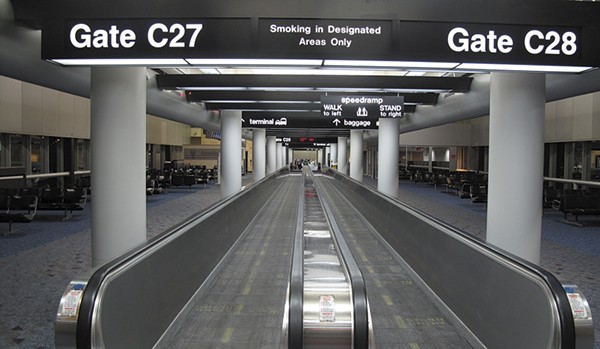 Update, May 17: After a contentious meeting of the Board of Estimate and Apportionment on Wednesday, the fate of city's attempt at airport privatization appears to be on the brink. Coverage of what went down at the meeting can be found here. End of update. Our original story continues below:

St. Louis' experiment with leasing its airport appears ready to move forward, in spite of concerns from a block of city lawmakers and watchdogs who worry that the city would be letting a Rex Sinquefield-backed group guide the process.

The push for privatization started in the final months of former Mayor Francis Slay's administration, and his successor, Lyda Krewson, took that torch and kept running. But she's also carried the weight of Slay's decision to turn to Sinquefield for funding to explore the option.

See also: Airport Privatization Has St. Louis Surveying an Unexplored Frontier. Who's in the Pilot's Seat?

In January, aldermen were blindsided when the city's selection committee chose the non-profit Grow Missouri, which is run by Sinquefield's public relations point-man Travis Brown, to be among the advisers helming the search to find a private company to lease the airport. For eighteen aldermen, Sinquefield's involvement was an instant deal-killer. They also pointed out that Grow Missouri was seemingly incentivized to push the deal through, come hell or bad terms for taxpayers, in order to get paid.

Krewson, however, has been adamant that the process isn't tainted, and she's argued that exploring privatization could both improve Lambert's operations and open a rich revenue stream for the city. She's now eager to get the process started, telling St. Louis Public Radio last month that "it's been dragging its feet."

Responding to a reporter's question about the committee's progress, Garvin, who has been leading contract negotiations, quipped, "I thought we were done three months ago."

The committee was poised to approve the hire of Grow Missouri and other advisory groups yesterday — it needs votes three of five members to pass. But members moved to reschedule when Tom Shepard, who represents the office of Board of Aldermen President Lewis Reed, failed to show up.

"We're close," Garvin said after concluding the meeting yesterday. "We just want to make sure everybody has a chance to say something."

The committee will meet again this morning with the aim of issuing final approval. If that happens, the matter will bounce to this afternoon's meeting of the three-member Board of Estimate and Apportionment, which under the city charter approves all contracts. There, Mayor Krewson, President Reed and Comptroller Darlene Green each have a vote.

While these initial steps for approving the contract have taken so long, and proven so contentious, it's worth remembering there's still a long way to go. Even with the E&A's approval, any potential lease could still be vetoed by the airlines in residence and the Board of Aldermen.

For more on the airport privatization issue — and why some see great potential windfall for the St. Louis if it can be done right — check out RFT's March 14 cover story, which dug into Sinquefield, Slay, and the lessons that other privately operated airports can teach St. Louis.

Editor's note: A previous version of this story stated that the city charter would have be amended before leasing of the airport. After publication, Grow Missouri's Travis Brown and deputy city counselor Michael Garvin told RFT that the city's position on this has changed, and, in the increasingly unlikely case that this privatization process actually moves forward, a charter amendment will not be pursued.